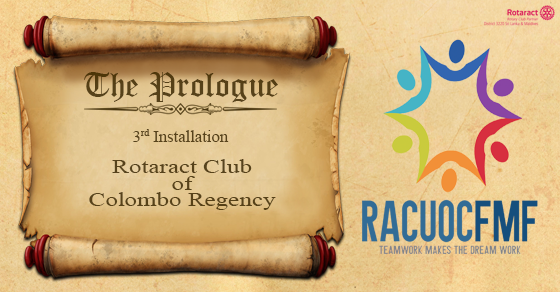 Posted at 14:06h in Installations, Others, Uncategorized by rcuocfmfadmin 0 Comments

The 3rd installation ceremony of the Rotaract Club of Colombo Regency was held on the 15th of November 2017 at the Royal College Union Skills Centre. Rtr. Uvini Liyanage, Rtr. Ashwini De Silva, Rtr. Piyumi Abeywardhana and Rtr. Promodhya Abeysekara represented our club at the event.


The ceremony commenced with the arrival of the dignitaries for the evening, Chief Guest Rtn. PHF Aruni Siriwardene, Guest of Honor Mr. Ashan Kumar, District Rotaract Committee Chairperson Rtn. PHF Bobby Srinivas and District Rotaract Representative Rtr. Anuradha Senanayake. The commencement of the memorable occasion was signified by the lighting of the traditional oil lamp followed by the flag salutation, Rotaract invocation, four-way test and the Rotaract song.


Next the secretary’s report for the year 2016/17 was delivered by Rtr. Yadushika Radhakrishnan, Secretary for the year 2016/17 through which the most significant milestones of the club were highlighted. Their hard work and dedication had resulted in a number of projects being successfully completed which had rendered great service to the society at large.


Following the secretary’s report for the year 2016/17 was the speech of the Chief Guest Rtn. PHF Aruni Siriwardene in which she expressed her pride in how the club overcame the challenges faced by them. She explained that Rotaract is a movement which models how our country would move forward, and thus, what is important is not the magnitude of the projects Rotaractors do, but the friendships and fellowships they build using which they face challenges successfully. She ended her speech commending the outgoing president and his board on a job well done and wishing the incoming president and his board good luck.


Next, the outgoing president Rtr. Ramesh Seneviratne addressed the gathering. He started his speech by appreciating the support given by the Rotary Club of Colombo Regency and the friends in Rotaract. He then moved on to emphasize on few important facts including, trusting yourself, believing in yourself, never giving up, appreciating the good people does and being grateful for what one has, all of which had helped him, his board and the club as a whole to move forward amidst the challenges they faced. He concluded his speech wishing good luck to the incoming president and his board.


Afterwards, the most awaited moment of the evening arrived which was the collaring of the newly appointed president for the Rotaract Club of Colombo Regency for the year 2017/18 where IPP. Rtr. Ramesh Seneviratne officially handed over the club’s responsibilities to Rtr. Aaqil Nazeer.


The incoming president made a promising speech about his vision for the club for the upcoming year and thanked everyone who helped him to reach where he is now with a few humble yet with heart felt gratitude. Afterwards he proudly introduced the newly appointed board of directors for upcoming year.


Next the District Rotaract Representative PP. Rtr. Anuradha Senanayake addressed the gathering in which she highlighted and appreciated the unique measurements the club along with the RACCCS had taken to ensure member retention. She then emphasized on how Rotaract brings out the leaders in people and thus becomes a change agent to the society. She then went on to thank all the Rotaractors who participated for the installations reminding that this installation was the last for the year. She ended her speech wishing the outgoing and incoming presidents and their boards and reminding to “Engage in Rotaract and Redefine Friendship”.


Afterwards, the District Rotaract Committee Chairperson Rtn. PHF Bobby Srinivas made his speech, in which he emphasized on how important the movement is in putting a person in the correct path through building leadership, providing access to resources and providing opportunities. He explained that the Rotaractors should use these resources and opportunities wisely to make an impact on the society which would last even in their absence.


Then the atmosphere of the evening was spiked up by an entertainment session which took the gathering through a musical journey.


Next, the Guest of Honor Mr. Ashan Kumar addressed the gathering. In his speech, he explained the importance of youth organizations from creating fellowship, building leadership to making an impact on the communities and the country as a whole. He ended his speech reminding everyone to do what they love and to do it in the best possible manner.


The installation ceremony came to an end followed by handing over tokens of appreciation, delivering of the vote of thanks, Singing of the National Anthem, many heart-felt felicitations and fellowship.


The Rotaract Club of University of Colombo Faculty of Management and Finance wishes best of luck to Rtr. Aaqil Nazeer and his board of directors for an amazing year ahead.