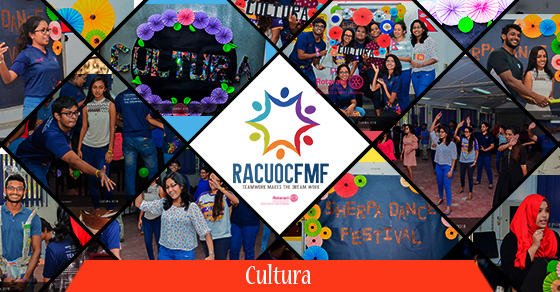 “Cultura” is the signature project initiated by the International Service avenue of our club with the aim of promoting international understanding and creating a good platform to make new friends around the world.

We joined hands with six clubs around the world which included three clubs from India and one each from Nepal, Indonesia and Nigeria. Each club involved conducted a cultural festival of another country. As a result, each club was able to get in touch with at least two clubs in two different countries.


Our club was assigned with an interesting cultural festival in Nepal known as Sherpa dance festival. During this festival, natives of Nepal wear their traditional clothes and perform a traditional dance in which they dance to a music using both their hands and feet.

The project was held on the 10th of January at the faculty premises and there were some specific activities planned to do amid the event. Firstly, Rtr. Irfana Ahmed gave the welcome speech which also included a brief introduction about the Sherpa dance to the participants.


Next, the floor was open for participants to learn some Sherpa dancing steps from our very own Treasurer/Co- Director Finance, Rtr. Uvini Liyanage. While some found it challenging to combine the fast-paced hand and leg movements, each and everyone seemed to enjoy it as it was a whole new experience for every member.


It was then time for some games where the participants competed in three groups. The first game was to dress up one of their team members in a creative costume using newspapers and that particular team member had to walk through the ramp and introduce themselves to the judges who chose the winner according to a certain criteria. The winner of this game happened to be the group purple.

Secondly, four members of each team had the opportunity to put a ball inside a basket either by bouncing or throwing. Each member got two chances and there were three baskets with several scores. Group yellow won this session and both teams were gifted for their enthusiastic performance.


Finally, all members once again performed the Sherpa dance they learned and refreshments were provided for all the participants as an appreciation for their participation. Then there were some photo capturing moments which are worthy as memories.


Cultura was successfully concluded by providing club members an overall idea about the culture of Nepal and we would like to extend our gratitude to all those who contributed to make this event an unforgettable experience.

Festival descriptions of other clubs


Sinhala and Tamil New Year is one of the valuable and interesting festivals celebrated in Sri Lanka on the 13th and 14th of April each year. The festival which marks the beginning of a new year according to the Sinhala and Hindu calendar is a time filled with enjoyment, love, gratitude and affection, followed by rituals done by everyone at the same auspicious time which includes, lighting the hearth, start of work, first transaction, first meal and first application of oil.


While Indonesia is a nation made of the world’s largest chain of islands, throughout which a diversity of citizens, languages, home styles, cultures and beliefs could be observed, games seems to be a common factor across the nation. The traditional games festival of Indonesia is a collaboration of traditional games celebrated mainly on Independence Day and Children’s Day. Balap karung (Gunnysack Race), Betengan (Fortress), Congklak, Engklek and Kelereng (Marble) are some of the most popular traditional Indonesian games. Indonesians believe that traditional games for children should be preserved because it teaches many values which enhance mutual cooperation, respect and cultivate social sensitivity.


Makar Sankrati is an ancient Hindu festival which is celebrated every year on January 14th. This is observed with colourful decorations, bonfires, kite flying and feasts. Makar Sankrati is celebrated with much fervor and enthusiasm. People celebrate this with delicious sesame loaded foods with a belief  that it gives energy and keeps them warm on the time of its festive. Mostly without any age inequity, kids and adults indulge in kite flying competitions as a celebratory affair.


Clue hunt is an adventure game with a well-structured concept, challenging and stimulating which is played widely across India. It is a mystery game challenge played in a team of 2 to 8 players. This is a physical game where the players are locked in a room where the mysteries are kept. The ultimate goal of this game is to get out of the locked room through team work.


Nigerians indulge in a large number of board games. One of the most popular among them is the Game Ayo. The game comprises of 48 pebbles and a board comprising of two rows of six holes in the board. Each player owns one row.


Seven Stones is a traditional Indian game, highlighting a special place in the Indian Culture, spread over a wide region even today. It is also called as Lagori , saat-pathar (seven stones), pittu and several other names It is the most complex and popular children’s game in India, and is rather like Dodge ball, but more aggressive.