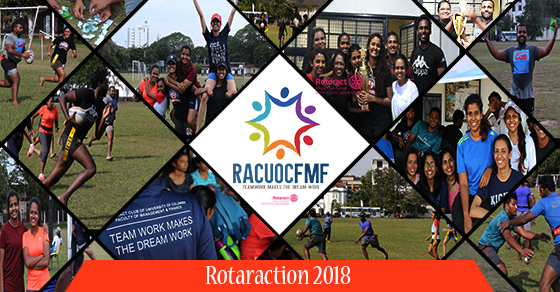 Posted at 13:38h in Avenues, Club Service, Uncategorized by rcuocfmfadmin 0 Comments
The Rotaractors of RACUOCFMF were gathered dressed in T-shirts and tracks at the University of Colombo grounds on January 12th 2018 to participate and witness the most anticipated sports day of the club, Rotaraction’18. The aim of Rotaraction was to warmly welcome the newly joined members of the club, to identify the hidden talents of our members and to bring all the members together to strengthen the bond among them.
To heighten the competitiveness, sportsmanship and enthusiasm of the day, the club members were divided into four houses which were named after the first four Rotarians of the Rotary movement. The names of the houses were Paul Harris, Gustavus, Silvester and Shorey. A house consisted of 40 members and two sports persons from each house were selected to lead their respective houses. The houses were led by the following captains, House Gustavus by Rtr. Hasangi Tennakoon and Rtr. Dilshan Udayaranga; House Shorey by Rtr. Ashwini De Silva and Rtr. Viraj Wickremesinghe; House Paul Harris by Rtr. Gamidu Wickramarachchi and Rtr. Ruchika Seneviratne and House Silvester by Rtr. Sandunika Wijebandara and Rtr. Adeepa Goonethilake.
Rotaraction was filled not only with organized sports such as cricket and tag rugby but also with many entertainment games which everyone enjoyed taking part such as dog and the ball, dress-up relay, obstacle race etc. Nevertheless, the highlight of the day was the new addition to Rotaraction, the exciting treasure hunt.
The day started off with teams consisting of 5 boys and a girl walking into the ground to begin the cricket matches and four matches were held to decide the winners. The entertainment game dog and the ball was held between cricket matches. After the lunch break, tag rugby matches started with teams consisting of 2 boys and three girls. House Silvester succeeded in winning the cricket trophy and house Paul Harris victoriously won the trophy for tag rugby. The most awaited treasure hunt was next in line to make all the players run around the place looking for clues to complete the puzzle of their respective house logos. The obstacle race, dress up relay and more entertainment games were held later in the day adding more excitement and fun to Rotaraction.
All teams exhibited excellent performances until the very end and then came the moment everyone was thriving for. House Gustavus and House Shorey were announced as runners up with a tie score and House Silvester won the overall championship trophy.
Rotraction’18 was concluded successfully thanks to all those who participated with team spirit and enthusiasm to lead their houses to victory. The energy was consistent throughout the day and the spirit was most evident when the event was uninterrupted even through unfavorable weather conditions. It was amazing to see all the members of the club encouraging each other and showing their true sports attributes, whether winning or losing.
A huge salute to the two chairpersons Rtr. Piyumi Abeywardene and Rtr. Chamara Madhusanka without whose dedication and effort this day would not have been a success.
Lastly, I would like to extend my best wishes to all who achieved at Rotaraction’18 and wish to see all these faces and many more with the same hype and energy again in next year!
Written By: