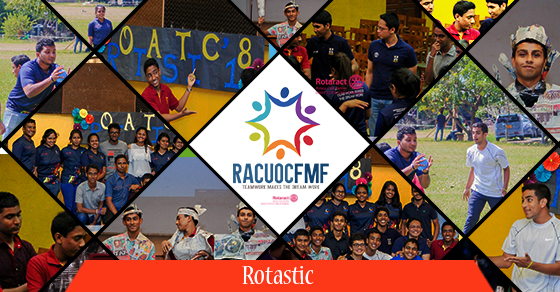 Posted at 13:36h in Uncategorized by rcuocfmfadmin 0 Comments
“Caterpillars sprout wings and transform into butterflies, only to see the world from great heights and serve it better.”
Rotastic was a workshop chaired by Rtr. Achini Dayarathna and Rtr. Ashwini De Silva to help Interactors unleash their true potential by encouraging them to take the next big step and join Rotaract.
This event was held on the 13th of January 2018 from 10:00 a.m to 2:00 p.m at the New Arts Theater of University of Colombo with the participation of Interactors from Ananda College, St. Thomas’s College and Mahanama College.
The workshop commenced with an ice breaker, ‘Charades’ where the three teams had to mime the songs and films that were provided by the opposition teams. This was followed by the session conducted by our club’s president Rtr. Akhila Wijetunga, who mainly spoke about the objectives of our club, signature projects of our club, the impact we have been able to make on uplifting the lives of the community and the perks of being a Rotaractor. This session gave the opportunity for the Interactors to clarify their doubts and it indeed inspired them to be a part of Rotaract.
Then, several activities including paper dressing, coming up with a team cheer and a team name, obstacle race, water balloon passing and passing the ring were organized to lift the spirit of all who were present and to tap into the team building skills of the Interactors, which is of utmost importance not only in Interact and Rotaract, but also in one’s day to day activities.
We all have experienced disagreements when it comes to team work, which should happen in order to mine those great ideas in each other’s mind. What is important though, is the ability of the team members to compromise and give their best when the team enters into agreement. In order to test this ability, the teams were given the task of creating a name and a cheer for their team. By completing this task successfully, all the teams came up with rather interesting names for their teams which were; Chimichunken, Discardians and WhyNots. The team cheer showed the level of enthusiasm, team work and team spirit of the young lads while team “WhyNots” bagged the victory of this task.
Then, it was time to test the ability of the leaders to navigate their teams through obstacles, which was done using the obstacle race. For this purpose, all the team members except for the team leader were blindfolded and the team leader was given the task of guiding his team members through the obstacles towards a given target.
In order to test how well these Interactors were in team coordination, games such as “drop the ball”, where the team members had to drop the balls in the team colour through the assigned holes and “water balloon game”, where the team members had to throw water balloons into baskets without bursting them, were organized.
While team “Discardians” emerged as the overall champions, all participants were considered winners as they were able to add new skills to their lives which would someday provide them the leverage to shine and make this world a better place.
As the final chance of bagging a win for their team, the Interactors were requested to upload a selfie of their team on social media, and an award was presented for the team with the most likes. Before concluding the event, the Interactors were given the task of writing down their feedback on their experience of taking part in Rotastic. Thus, the positive feedback reflected the effectiveness of the project and encouraged our club to do more of such projects, for we see that “the world needs more Rotaractors”.
Despite the many obstacles that we had to face on that day, we believe we were able to achieve our objective of inspiring the Interactors to be a part of Rotaract in the future and we are glad that all the Interactors thoroughly enjoyed the time they spent strengthening the bond between Interactors as well as Rotaractors.
Written By: