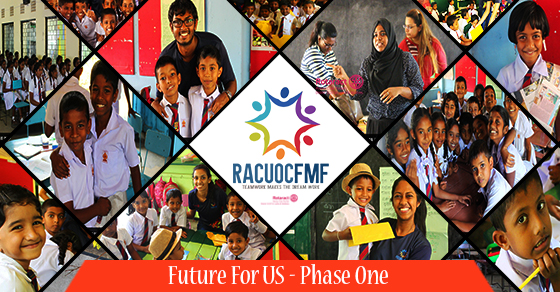 “It is great not only talking about community service in theory, but truly doing it.”

'Future For Us - Phase One' was the best example which proved the above, where RACUOCFMF created an opportunity for its members to engage themselves in true community service.

The project was carried out on the 26th of January at Pelena Maha Vidyalaya, Hatharaliyadda. Project chairpersons, committee members and the club members joined in this noble deed and extended their fullest contribution, support and commitment to make this project a success while enlightening the lives of the students.

As preparations started for the project, three different sessions were organized for the students of Primary school, Middle School and Upper School. Gifts were awarded to winning teams and also to each and every student of the school.

First and foremost, the Rotaractors’ were briefed on the various duties on their way to school. Although the journey was a bit tiresome, the faces of the students filled with joy and hope took away the weariness and their warm welcome touched our hearts immensely. We were treated with a delicious herbal drink with jaggery and after enjoying it, all our members were energized to carry out the responsibilities assigned to them.

Two members were in charge of each grade of the Primary school and each class was divided into 4 -5 teams to perform the games. Animal Charades, Identifying Objects, Paper Dressing were few of the games carried out. At the end of each game, the winning team was rewarded with a gift. Afterwards, grade 1 - 3 students were given the opportunity to draw their ambitions and grade 4 - 5 students were asked to speak about their ambitions and our club members motivated them by briefing what they should do to make their ambitions a reality. It was amusing to see their active participation and enthusiasm throughout the sessions and at the end of the program, gifts were distributed to all the students from grade 1-5, which brought meek smiles to their little faces.

Meanwhile, some of the club members were engaged in conducting games for grade 6, 7, 8 and 9, in the school hall. All the students were mixed into six different groups, with one club member in charge of each team. The session started off with “Balloon Ping Pong”, a game which the students enjoyed while interacting with each other. Secondly, teams were given newspapers and straws and was asked to build a bridge using their creative abilities. The judgment was given based on the creativity and the stability of the bridge. Next, the students participated in “Passing the Ring”, a game where students had to pass the ring in a row using straws. We were able to see the coordination and unity between the teams and how it helped them to build their team strength.

Then, the teams were engaged in “Passing the Cotton”, a game where team members had to pass the cotton using straws from one end to another. Later, the six teams were given the opportunity to participate in a “Treasure Hunt”, where they were given a list of objects that they had to search in their school garden. We witnessed the excitement and active participation of students in this particular event. Finally, we made each team participate in “Paper Dressing” where they had to dress a member of the team using news papers. This was an activity that brought out the creativity and team coordination of the students. The motivation and the encouragement given by the club members inspired them to engage in games actively. Each student including the club members enjoyed the few hours spent with these students of Pelena Maha Vidyalaya.

While all the entertaining and interacting activities were carried on, the three counselors from the Colombo Institute of Research and Psychology (CIRP) conducted group counseling sessions for the students of grade 10, 11 and 12, explaining them the importance of secondary education thereby opening their minds to the broader world. Students were given tips on how to manage stress and utilize the best capacity of them in exams.

After concluding all the sessions, the students of the school and the club members gathered to the school hall. Rtr. Thilini Costa, Rtr. Krishmal Fernando and Rtr. Chathun Heiyanthuduwa delivered motivational speeches explaining the importance of entering into local universities and making their parents dream come true, which truly inspired all the students. Afterwards, prizes were distributed to each and every student of the school and these gifts were sponsored by our own club members. After the awards ceremony, the Principal of the school delivered a speech inspiring the students and thanking the members of the club. Principal suggested the club members to conduct programs like this with the school in the following years as well, which will add value to the lives of these innocent children.

After concluding all the programs, the club members were offered lunch by the parents of the students. The delicious lunch which was warmly served to us was admired by all the members and we were amazed by the hospitality of the villagers.

Kudos to our project co - chairpersons, Rtr. Isuri Alahakoon and Rtr. Shehani Leo for organizing the project very well and we are glad that we were able to reach the culmination of 'Future For Us - Phase One' with a massive success.