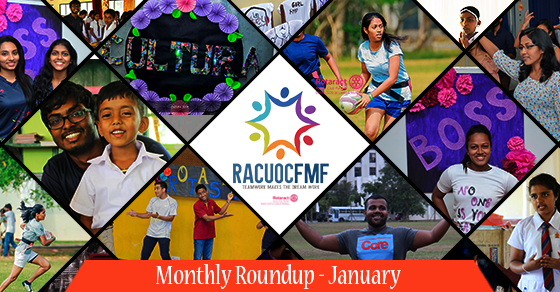 Posted at 03:03h in Round Ups, Uncategorized by rcuocfmfadmin 0 Comments
Here’s a look at how the month of January was for our club.

Rotaract Champions’ League
Rotaract Champions League, the most awaited sports event of the Rotaract calendar happened on the 21st, 22nd, 27th and 28th of January, where RACUOCFMF was able to maintain our position as the Runners-up for the 2nd consecutive year. We would like to thank all the sportsmen and women as well as all the FMFers who turned up to cheer our club for maintaining the clubs winning streak.

Cultura
“Cultura” was the signature project initiated by the International Service avenue of our club with the aim of promoting international understanding and creating a good platform to make new friends around the world.


We joined hands with six clubs around the world which included three clubs from India and one each from Nepal, Indonesia and Nigeria. Each club involved conducted a cultural festival of another country. As a result, each club was able to get in touch with at least two clubs in two different countries. Read more

Rotaraction’18
Rotaraction’18 was a sports day organized with the aim of  warmly welcoming the newly joined members of the club, to identify the hidden talents of our members and to bring all the members together to strengthen the bond among them.


To heighten the competitiveness, sportsmanship and enthusiasm of the day, the club members were divided into four houses which were named after the fore-fathers of the Rotary movement – Paul Harris, Silvester, Gustavus and Shorey. Read more

Rotastic
Rotastic was a workshop done by RACUOUFMF to help Interactors unleash their true potential by encouraging them to take the next big step and join Rotaract.


The event was held on the 13th of January 2018 from 10:00 a.m to 2:00 p.m at the New Arts Theater of University of Colombo with the participation of Interactors from Ananda College, St. Thomas’s College and Mahanama College. Read more

BOSS – Phase II
The second phase of the Community Service initiative – BOSS, happened on the 24th of January at the Faculty of Management and Finance, University of Colombo. The day was filled with insightful discussions on empowering women and opportunities to showcase the creative abilities of all those who were present on that day. Read more

Future For Us – Phase I
“Future For Us” is a recurring and heart-touching community service initiative of RACUOCFMF. Like in previous years, the Rotaractors of the club visited the Pelena Maha Vidyalaya in Hatharaliyadda with a number of fun and educational sessions and gifts for all the students. This year, however, the project was done on a bigger and better scale, this being just the first phase of a tripartite project. Stay tuned for more. Read more

As of now our blog has a view count close to 170,000 views! We would like to extend our deep gratitude to all our readers for their support and enthusiasm and especially to our amazing club members without whom the blog would not have been where it stands today.

Here are just a few of the many external club events FMFers took part in the past month.


Conquer Colombo
Conquer Colombo, a signature project of the Rotaract Club of Achievers Lanka Business School happened on the 7th of January for the 5th consecutive year, with a little twist – Frimi Conquer Colombo; Race against time, the proceeds of which went towards Project Life, which works towards providing access to clean drinking water to those affected by chronic kidney disease.