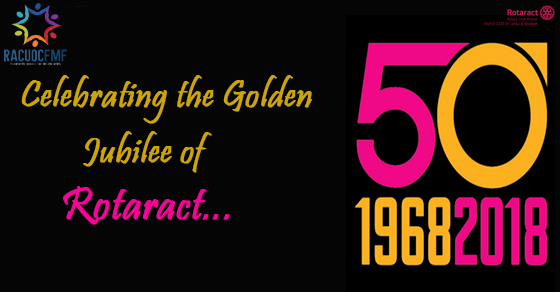 Posted at 04:00h in Featured, Uncategorized by rcuocfmfadmin 0 Comments
Rotaract – “Rotary in Action” – a movement for the youth population to accept the challenge of a better future.
1968, became the time when the enthusiastic youth between 18-30 years were in search of a club, same as, Interact – for students in secondary schools and Rotary – for illustrious people above 30 years who engaged in heartiest services for the world. While in the same year on 23rd of March, the dream actualized. Rotaract, with the help of fellow Rotarians, was established as a counter party of Rotary International, with the chartering of Rotaract Club of North Charlotte, Caroline in the United States. Since then, until the proud Golden Jubilee celebrations in this year 2018, Rotaract remained a well renowned organization that prospered, in four main avenues as Community service, Club service, International service and Professional development.
Due to the organization’s reputation to develop leadership and responsible citizenship through service to the community, the expansion was instant. Whereas now the world consists of 290,000 Rotaractors, from 9,500 clubs based in 177 countries.
Interestingly, one year after the establishment of the Rotaract Movement in the US, in 1969, Rotaract District 3220 Sri Lanka and Maldives was inaugurated with the chartering of Rotaract Club of Colombo. Our District 3220 includes 4,300 Rotaractors, representing 65 clubs that includes Community based clubs, Institute based clubs and the world’s first Corporate based club.
In commemoration of the Golden Jubilee, different Rotaract Districts carries out several celebrations, whereas Rotaract District 3220, covers up a celebration in Jaffna, Kandy and Colombo, which will be concluded with a two day carnival.
In spite of all these arrangements, our club, the Rotaract Club of University of Colombo, Faculty of Management and Finance, was ever ready to celebrate all the important milestones of the Rotaract movement, with our well-fed main avenues of service which bathed us in knowledge, experience and exposure while delivering service for the community.
Here’s a glimpse of main projects carried out by our club during the past seven years since its chartering in 2010.
Community Service
The entire club’s commitment is focused on this avenue where we light up the lives of many in different ways. Main projects encountered under this avenue are:
Hero in you: an initiative to give hope and courage for the children suffering from cancer in the children’s ward of the National Cancer Hospital, Maharagama, to live out their dreams, and to find the hidden hero in them.
Green dream: the environment footprint reduction program for sustainable and environmental friendly approach which was followed by “Harithalokaya” an awareness program.
Boss: the women empowerment initiative of the club which happened in three phases, to uplift the self-confidence, creativity and forwardness.
Future for Us: one the main community development projects done at the Palana Maha Vidyalaya in Hatharaliyadda to interact and inculcate motivation in students to achieve their dreams with the continuation of higher education.
Live a little love a little: in celebrating the children’s day, we were able to fill the hearts of victimized set of souls with much joy and spirit with this interactive project.
Blind walk: in celebration of the World Sight Day, this was to make awareness on the issues faced by the visually impaired and to encourage eye donation.
This avenue further encountered many more projects such as Reach out, Clothing and toy drive, Happy street pooch, Happy hope bag, I to eye, Share the joy etc.
Club Service
Dream team: the signature project of this avenue, aimed to improve bonding, active participation, addition and retention of club members.
Rotaraction: a program to improve the sportsmanship, fellowship and to make club members to enjoy sporty performances.
Board trip: the board members achieve a fantastic opportunity to mix and mingle and to have a memorable experience.
This avenue further encountered projects such as orientation day, installation ceremony and club party etc.
International Services
Share care smile: in corporation with the Rotaract Club of Hyderabad Himayath Nagar and 40 other clubs, this project distributed stationery items to less privileged students of the school.
R-Dosti and Cultura: to build on the international understanding and relations these projects involved, creating videos by performing different cultural events by exchanging cultures.
This avenue further encountered projects such as R-evolution, vConnect etc.
Professional Development
Glass Ice: a main project initiated to uplift the ultimate career and personality development of the Rotarctors and Non – Rotaractors.
Mind your Manners: this was compromised with activities that fulfilled the motive to help all to build the personal brand by equipping them with etiquette, confidence, knowledge and social graces.
This avenue further encountered projects focused on developing skills of Rotaractors.
Public Relations and Information Technology.
V-Connect:  one of the milestones in the Rotary International District 3220 that brings together Rotary, Rotaract and Interact communities on a digital platform.
Rotastic: A project done by our club to help Interactors to identify their true potential and to be encouraged to be a part of the Rotaract movement.
What is Rotaract: a documentary video filmed, by questioning a dozen of people randomly selected to make awareness and improve knowledge about the Rotaract commitments.
Finance
King spin: An exclusive finance project that entertains the entire Rotary family with a bowling tournament with unforgettable experiences.
This avenue further encountered projects such as T- shirt project, Bake Sale etc.
With all these activities the progress was impressive with different and constant achievements that includes;
Proudly presenting the above facts, the commitments, efforts, and encouragements were taken to uplift our club by the members all through out the years, and in fact, that becomes the beforehand addressing of the commemoration of Golden Jubilee in this amazing Rotaract movement. This becomes the result when a community of similar minded people get together to confirm that  “Team work makes the dream work”.
Written By:
Rtr. Achini Dayarathne – Club Member