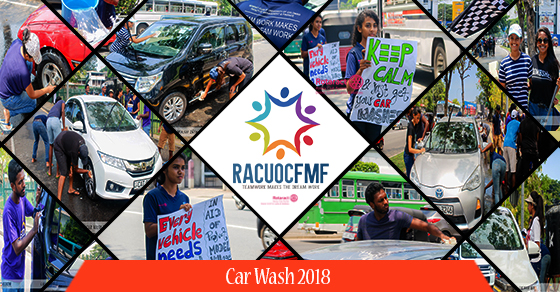 Posted at 04:59h in Avenues, Finance, Uncategorized by rcuocfmfadmin 1 Comment
The Annual Car Wash organized by the Rotaract Club of University of Colombo Faculty of Management and Finance was held on the 7th of April, at the BRC grounds. This year’s car wash was organized in aid of the Community Service Project “Model Village”; which is expected to target pregnant women and young children and would be carried out in the Kandy District in order to create awareness on Maternity and Child Care.
The preparations for the Car Wash were carried out quite enthusiastically by all the members of the club, as it was a project very familiar to each and every member. The ticket sales began about a week prior to the Car wash. Members were determined to sell as many tickets as possible in order to raise sufficient funds for the project. Most areas within Colombo were covered to create awareness about the project and many generous souls were kind enough to purchase a ticket to help us brighten the future of a very significant part of the community. The heartwarming moment was when tickets were purchased by those who did not own a vehicle and the members are grateful to all who cared to pay attention to the cause of organizing the Car Wash.
The most important day finally arrived and the members were looking forward to wash some “very dirty vehicles”, in order to provide their assistance by cleaning them for the owners. The Car wash began at 9.30 am and to our pleasant surprise the turn up of the vehicles was quite good. Of course the members tried to increase the number by means of showcasing posters and flags that would attract more customers. The splashing of water and wiping of the dust off the vehicles were very efficiently carried out, although the members had to be in the scorching sun. But the aim behind organizing the Car Wash, took away the tiredness of the members and encouraged them to wash more and more vehicles.
As the day passed by, the effort of our members grew further. The aim was to raise sufficient funds in order to successfully carry out the project. But, as the evening dawned the “Rain God” decided to shower us with his blessings, which was quite unfortunate as it took away the chances of collecting funds further. Nevertheless, the members were quite delighted and satisfied with the outcome of the effort put in by all for the past week. It should not be forgotten that almost all those who decided to get their vehicles washed by us did not forget to contribute to the generous cause by means of monetary donations. The members would like to extend their heartfelt gratitude to all those who assisted us in reaching our target of collecting funds for project “Model Village” and made our Car Wash a success.
Written By: Rtr. Shehani Leo