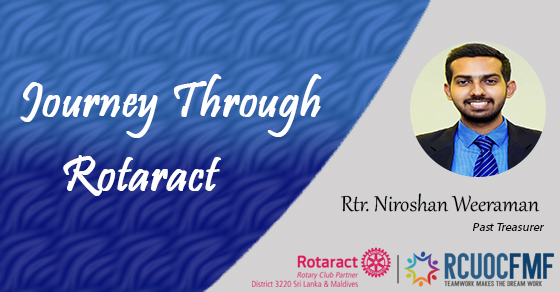 Posted at 14:07h in Journey Through Rotaract, Series, Uncategorized by rcuocfmfadmin 0 Comments
Rtr. Nioshan Weeraman is the past Treasurer of our club. With his silent and soft personality, he is someone who is loved by anyone. He is capable of achieving mindboggling results in whatever the tasks he does, attesting the immense level of commitment and dedication he has towards getting the job done. To share some of the great experiences and knowledge he gathered, we invited him to share his Journey Through Rotaract.
What made you join Rotaract?
Initially what made me interested to be a part of Rotaract was simply friends. During the very beginning of my university life when I was involved with other social movements, most of my friends were involved with Rotaract and that influenced me to join the movement. However, later I was inspired by the values of Rotaract and what it truly is. That helped me to be a passionate Rotaractor throughout.
As for your opinion how can Rotaract help an undergraduate to develop themselves?
Rotaract specifically helps to develop people skills which is the most important for an undergraduate. Not being limited to that, the network that is built up around the movement is very important as it connects people and helps to create a social platform which will ultimately develop individuals to be logical human beings with interpersonal skills. The influence towards the professional development drives undergraduates to be future corporate leaders.
Were you able to give something out to the society as a Rotaractor, or was it more towards self-development?
It was both at the same time. I was able to contribute to the wellbeing of the community by being involved with projects such as, “Reach-out” where we could help victims of adverse weather conditions to stand strong. Also, by being involved in several beach clean ups, and many other community service projects I could give something back to the society while the self-development was immense from projects such as, “Glass Ice”. I believe the right balance of these two will produce a successful Rotaractor.
Were there any projects which significantly changed your life? If yes, what?
There were projects that significantly influenced me, especially, “Kingspin 1.0” was a project that gave me a good learning during a time that was not so easy in many ways. However, eventually it was one of the most successful projects and the credit should go to chair persons. Looking back, the entire journey of Rotaract changed me with many good traits that were developed within me.
Are there any habits or practices that you have started as a Rotaractor and still continue to this date?
The enthusiasm to explore new things and getting to know more people are the two most important practices I could develop from Rotaract which come in handy always. These have helped me to find the right balance at work place as well as in my personal life.
Has networking done as an FMFer come in handy afterwards?
I would say absolutely yes. Being a FMFer, the connections that are built up will guide you, support you and succeed you in all future endeavors. The reason behind this is the fact that, we will get to know many university undergraduates who will be in different fields. Few years down the line, these connections will always come in handy. Having said that, in a broader perspective, the networking as a Rotaractor and having connections with the entire Rotaract community should be the ultimate achievement.
If you are to put your experience as a Rotaractor into 3 words, what would they be?
Experience! Friends! Fun!