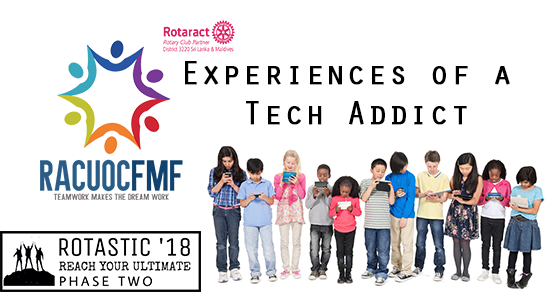 20 May Experiences of a Tech Addict

Posted at 03:25h in Featured, Uncategorized by rcuocfmfadmin 0 Comments
“The true use of technology comes from the user, not from the device”, were what my mother’s first words when she came into my room the other night. “You’ve got to stop this, I mean, between you using your phone, PlayStation and your laptop every single inch of night and day, you seem to be getting distracted from your studies as well”. She seemed to be getting madder by the second to come. I had to stop this before it got out of hand and by that I mean before my dad got in on it.
“I know”, I said softly under my breath in deep depression. I meant it to be heard by my mom and thankfully she did. Then I had one of the weirdest reactions from my mom ever. She suddenly approached closer and sat down beside me on the bed and said, “So, you wanna talk about it?”. I was stumped for a second but came out with it all for hours on end. I ranted on and on about all that’s been happening lately. The hundreds of games I’ve been playing, the countless music and social media issues I’ve been dealing with. I ended up in tears but it was totally worth to talk about it and get it all out in the end. My mom hugged me tighter with every little bit of unfortunate information of what had become of her son. The main reason I kept it all inside was to not have my parents think any less of me but I couldn’t care less of that right now.
The talk must’ve beaten me up pretty good because I woke up the next day, seriously drowsy and just generally feeling really out of place. My mom walked by and brought in my tea. I looked down at my feet and kept staring down in deep shame. I couldn’t even bear to look at her, not after what happened last night. She approached the bed and I slowly tilted my head upwards. She was strangely smiling at me. I took my tea and was sipping it on slow motion when my mom said softly, “hurry down now Trev, I’ve got something for you”. I dragged myself out of bed and slithered into the bedroom as slow as possible. I came out in about five minutes and slumped downstairs. I checked the living room and went into the kitchen and that’s when I realized what had become of my childhood. It was my old friend that helped me through a couple of grades in the past, my guitar, which i used to call ‘Scarlet’ but that came into a sudden stop once the strings wore off and I guess I forgot about it completely after that. I was so overjoyed that I forgot all about the sadness for a second. It was still in the same condition it was before, but at the exact moment, my mom pulled a brand new, mint condition guitar from behind the table and that just threw the world afar for a while and I was there, the happiest I could be. “Miss this”, my mom asked grinning from ear to ear. I couldn’t hold it, so I practically leaped and hugged her so tight and thanked her like a million times before I let go.  “Why though?”, I asked clutching the guitar to my chest.
“The only reason you became addicted to your devices was because you missed ‘Scarlet’ so much. So here’s the alternative”, she said and went upstairs and left me with my tech reliever all to myself.