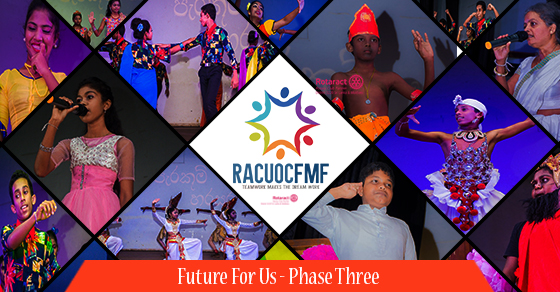 Serving the community who are in need, with selfless commitment is not only something easy but also something precious which would result in creating greatest contentment for all. Humanity cannot be measured by way of money, it is the sincerity and the most powerful creed humans own. Community service improves the lives and the society around us. It enriches attitudes of both server and the recipient towards the society and that is what life is all about.

Having successfully completed the phase one and phase two of project ‘Future for Us’, RACUOCFMF realized that their potential could be further extended to fulfill responsibilities towards the future representatives of our country.

Accordingly, ‘Future for Us Phase 3’ was initiated with the motive of creating a platform to showcase the hidden talents of an immensely capable group of students studying at Narahenpita Parakrambahu Vidyalaya. Even though this school is located in the heart of Colombo, majority of the students are from underprivileged families. The school has minimal facilities which made it difficult to unveil the talents of these students. Nevertheless, the school curriculum always focused on promoting the aesthetic skills of the students.

Having identified the hidden talents of these students, we decided to bring life to their dream of performing on a stage, thereby organizing their very first talent show.

With the guidance and support of the school Principal and under the direction of teachers in charge of dancing and singing, students were trained for the talent show and we encouraged each and every student to be a part of it. Within few weeks, students stepped out with much enthusiasm to make their dancing, drama and singing extravaganza a reality. Having seen the level of enthusiasm and energy generated within them, we made all the arrangements to make their special event a remarkable one.

The talent show was titled as “Parakum Harasara” and was held on 30th of May 2018 at the New Arts Theater, University of Colombo. Divisional Educational Director of Southern Colombo, Mrs. D. Ilangathilake was invited as the Chief Guest for the evening. Principal of Narahenpita Parakramabahu Vidyalaya Mrs. Vijithani, District Rotaract Representative Rtr. PP Anuradha Senanayake and Principals of few other schools were among the other invitees of the event.

The project co-chairperson, Rtr. Gayani Weerasinghe welcomed the gathering on behalf of the club and the event kick started after lighting the traditional oil lamp, followed by a ‘Pooja Dance’ performed by the school dancing troupe.

Then, the Chief Guest delivered her speech by commending the talents of the students while appreciating the efforts of the club members. The talent show comprised of energetic dancing acts, astonishing drama performances and enchanting vocal pieces performed to the best of the ability of the students. Contribution made by the singing and dancing crews of University of Colombo, Faculty of Management and Finance truly enhanced the magical and picturesque ambiance of the event.

The Principal in her speech, expressed her gratefulness to RACUOCFMF for making one of their biggest dreams come true and conveyed her heartiest wishes to the club. DRR Rtr. PP Anuradha Senanayake also conveyed her pleasure of being able to attend the talent show.

The event winded up with the vote of thanks delivered by the project co-chairperson Rtr. Thilini Costa and tokens of appreciation were given to the guests and to the teachers for their contribution to make the event a success.

With the generous support and kind words of many people, we were able to successfully complete the project ‘Future for Us’ and we are truly pleased for being able to see the best in others when they cannot see it in themselves and for being able to create a platform to show it to the entire world.