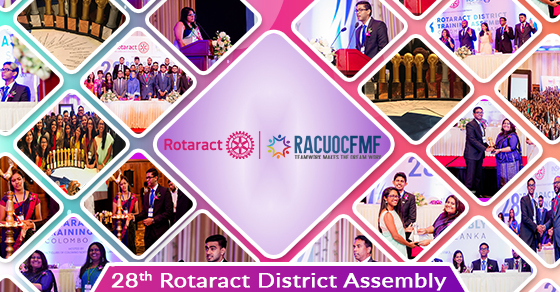 Posted at 18:17h in District Events, Others, Uncategorized by rcuocfmfadmin 0 Comments


After the registration of the participants, the first session started off with the arrival of the dignitaries and lightning of the traditional oil lamp. After the dignitaries took their respective seats at the head table, the Assembly was called to order and was followed by the Rotaract formalities of flag salutation, Rotaract invocation, the four -way test and the Rotaract song led by Rtr. Gayathri Karannagoda.


The gathering was then warmly welcomed by the Chairperson Rtr. IPP Akhila Wijetunga, formally recognizing the presence of the distinguished guests and the participating Rotaract clubs at the event. Next in line, the Secretary’s report for the year 2017/18 was presented by the outgoing District Secretary Rtr. Shalanka Weerasinghe.


Followed by an introduction by Rtr. Oshadha Abhayasundara, the District Rotaract Representative of the year 2017/18, Rtr. PP. Anuradha Senanayake heartily addressed the gathering, particularly aiming at inspiring the future of the Rotaractors gathered, by citing examples of her own journey of engaging and redefining friendships. She elaborated on how initiatives were taken on different avenues such as Membership Development, Community Service, Sports and Recreation and many more. Her inspiring words ended with a special note of thanks for all the help extended by each and every one throughout her eight years of being an active Rotaractor.


The gathering was then addressed by the District Rotaract Committee Chairperson 2017/18, Rtn. PHF. Bobby Srinivas. He made it a great opportunity to thank all the Rotaractors for being so enthusiastic and amazing. The Venerable thero, the DRR, the Presidents and Secretaries of the clubs were specially mentioned for the help extended and he ended his speech by congratulating the new DRR and his team for a successful year ahead.


Next in line, the gathering was addressed by Rtn. PHF. Satyajit Seneviratne. He expressed his joy in successfully fulfilling the duties as the District Youth Services Chairperson of the year 2017/18, which would not have been possible without dedication and hard work of all those who were around him. He also extended his heartiest wishes to the newly appointed committee’s future endeavors.


The 1st session of awards distribution in recognition of talent, success and achievements in 2017 grasped everyone’s keen attention.


The gathering was then entertained by Rtr. Sanjana Perera through a mesmerizing musical performance. Afterwards, the Chief Guest of the first session, District Governor 2017/18, Rtn. Dr. Ven. Bandagiriye Somawansa Thero addressed the gathering and mentioned that “Rotaract is a banner that brings together people in friendship.” The Thero emphasized on the life of a Rotaractor that is bound around entertainment and experience, along with true spirit of service. He ended his inspiring speech by congratulating the outgoing committee and giving his blessings to the new committee for all its future endeavors.


Tokens of Appreciation were then presented by the outgoing DRR. Rtr. Anuradha to the dignitaries, outstanding personalities for the tremendous help extended towards carrying out her duties with much ease in a hassle free environment.


Followed by the vote of thanks presented by the project co-chairperson Rtr. PP. Nipun Peiris, the fellow Rotaractors were split into groups to participate in the training workshops organized with the aim of briefing the newly elected board members to handle the upcoming year with much ease. The first session was then concluded with a break for lunch and networking.


The second session of the day’s proceedings was marked with the arrival of dignitaries followed by the traditional lightning of the oil lamp. The session was then called to Order & the Rotaract formalities were thus carried out.
The Project Co-Chairperson, Rtr. PP. Mayukha Abeyratne set the ball rolling by welcoming the gathering for the 2nd session of the day.

The most crucial part of the entire day began with a fine introduction presented on that man who is being given a profusion of responsibilities as the District Rotaract Representative of the year 2018/19. The collaring of the incoming DRR, Rtr. PP. Mohamed Amjath Yoosuf, was followed by his address to the gathering as the 28th DRR. The DRR who took over the podium went through a quick snapshot of his 10 year journey of engaging in Rotaract. He mainly elaborated on the new theme for the year “Inspire the Future” that tries inculcating innovative ideas to advocate for change and youth development. The theme revolves around four main core values:
1. Inclusivity & Equity
2. Skills Development & Youth Empowerment
3. Creativity & Innovation
4. Leadership & Strategic Planning


The District Committee for the Rotaract Year 2018/19, is as follows;


Next in line, Chief Guest of the session, District Governor 2018/19, Rtn. PP. Dushan Soza expressed his strong preference on the theme chosen for the year and he explained his future plans to help improve the activities of Rotaract. His words ended by wishing nothing but the best for the new committee to excel on the responsibilities that they have taken up. The address by District Rotaract Committee Chairperson 2018/19, Rtn. PHF. Sathiyeandra T. Singham also added best wishes to the committee members as well as the new DRR for the future endeavors.


The last speaker of the session Rtn. PP. G. S. Sylvester, District Youth Services Chairperson of the year 2018/19 too addressed the gathering and added his wishes.


Being a Rotaractor is not just a profession but requires a lot of dedication and perseverance without a wage, and the least we could do is to appreciate the heroes behind these great projects.
Awards were given away in recognition of all the hard work pooled in by the Rotaractors during the past year, encouraging them to partake in Rotaract activities with much enthusiasm in the future as well.


Marking its legacy and lifting up its excellence to much greater heights, RACUOCFMF was able to secure 13 awards including the awards of most committed Rotaract Leader, most outstanding Secretary, as well as the Spirit of Service Award. Thus it proclaimed our motto “Team work makes the dream work.”


The end of the District Assembly was marked by the deliverance of Vote of Thanks by the Rotaract District Secretary 2018/19, Rtr. IPP. Afraa Mohamed, followed by the tradition of singing the national anthem.

A journey has just begun, let’s engage in Rotaract and Inspire the Future together. 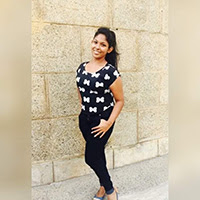