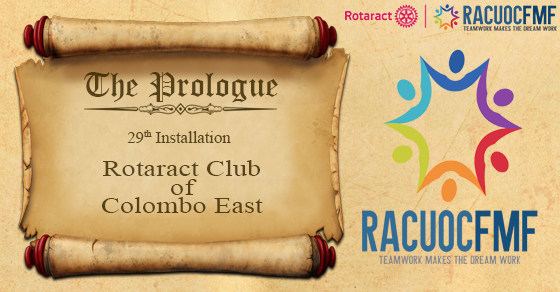 Posted at 15:47h in Installations, Others, Uncategorized by rcuocfmfadmin 0 Comments

On the 13th of July 2018 Rtr. Dillon Henderlin and his new Board of Directors took over their duties and responsibilities for the year 2018/19 at the 29th Installation Ceremony of the Rotaract Club of Colombo East held at the Lakshman Kadiragamar Institute. Rtr. Shehani Leo and Rtr. Piyumi Abeywardhana attended the ceremony on behalf of our club.


After the lighting of the traditional oil lamp by the distinguished guests, the house was called to order followed by the Flag Salutation, Rotaract Invocation, Four-way test and the Rotaract song.


The gathering was warmly welcomed by the Project Chairperson Rtr. Shenaal Chandiram. Subsequently Rtr. Ali Raheem delivered the Secretary’s report for the year 2017/18 with the aid of a video clip which outlined the projects carried during the year and achievements that included number of district awards.

Next on stage was the outgoing President Rtr. Adrian Jesuthasan who expressed his gratitude and love through a nicely written poem to all those who supported him throughout his journey and extended his wishes to the incoming President and his board.


After giving an introduction to the President for the year 2018/19, the outgoing President Rtr. Adrian Jesuthasan collared the incoming Presideny Rtr. Dillon Henderlin, which was the highlight of the evening.


Then the newly appointed President Rtr. Dillon Henderlin took the stage and promised to give his best to the club to take it to greater heights. He then recalled his journey through Interact and Rotaract and thanked his family, friends and fellow Rotaractors for the unwavering support given throughout. Finally he introduced his Board of Directors for the term 2018/19, which is as follows;


Following the induction of the Board, the District Rotaract Representative Rtr. PP Amjath Yusaf addressed the gathering. He appreciated all the hard work and wonderful projects done during the year, congratulating the outgoing President and his Board. His speech concluded by extending his wishes to the newly appointed President and his Board to Inspire the Future.

The District Rotaract Committee Chairman Rtn. PHF Satheandra Tharmakularajasignham congratulated Rtr. IPP Adrian Jesuthasan and his Board on successfully completing the projects and specially on increasing the membership during the year. He wished  President Rtr. Dillon Henderlin and his Board the best of luck, mentioning that he has faith that the club is in capable hands.

Next on the agenda was the address by the District Youth Services Committee Chairman, Rtn. PP PHF G. Sylvester, followed by an entertainment item performed by the President’s brother, YES Super Star; Ryan Henderlin.


Guest of Honor, President of the Roatary Club of Colombo East Rtn. PHF Sampath Perera then extended his warm wishes to the incoming and the outgoing Boards.

Finally, the Chief Guest for the evening District Governor Rtn. PP PHF Dushan Soza took the stage to congratulate the outgoing and incoming Boards and the Presidents for their commitment and accomplishments, while emphasizing the positive impact of Interact, Rotaract and Rotary on the society.


After distributing the Tokens of Appreciation to the dignitaries, the floor was declared open for felicitations. The Vote of Thanks was delivered by the Secretary for the year 2018/19 Rtr. Fabian Schockman, marking the end of the ceremony. Subsequently, everyone gathered for refreshments and fellowship.

The Rotaract Club of University of Colombo Faculty of Management and Finance would like to extend warm wishes to Rtr. Dillon Henderlin and his Board for a great year ahead.