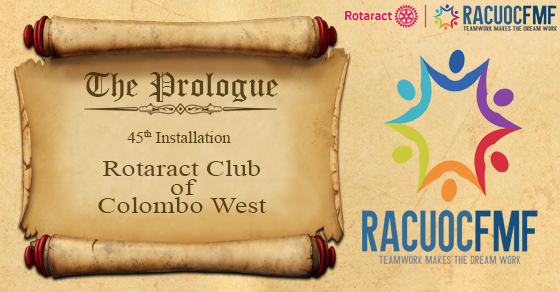 Posted at 16:09h in Installations, Others, Uncategorized by rcuocfmfadmin 0 Comments

The Olympic House was an eventful place on the 20th of July 2018, since all the members of the Rotaract Club of Colombo West were working hard for the most-awaited event in their calendar; the 45th Installation Ceremony of the Rotaract Club of Colombo West. Rtr. Limashi Kosgodage, Rtr. Shehani Leo, Rtr. Ashwini De Silva and Rtr. Anuni De Alwis attended the ceremony on behalf of our Club.


At 6:00 p.m., registrations started for the Rotaractors of all other Clubs who came to give their best wishes for the  newly designated President and his Board.


With the arrival of the dignitaries the ceremony started off. Chief Guest for the evening, President of Rotary Club of Colombo West Rtn. PHF. Rohina Macan Markar, District Chairman Youth Services Rtn. PHF Past President G.S. Sylvestor, District Rotaract Committee Chairman Rtn. PHF Satheandra Tharmakularajasingham and District Roatarct Representative Rtr. PP Amjath Yusuf. Distinguished guests were invited for the lightning of the traditional oil lamp and they were requested to take seats at the head table. After the National Anthem the house was called to order by Sergeant At Arms followed by the Flag Salutation, Rotaract Invocation, Four- Way test and the Rotaract Song.
After the warm welcome, Rtr. Mano Mudunkotuwa delivered the Secretary’s Report for the year 2017/18 followed by a video clip which exhibited about projects done and revealed the success of their last year’s journey.


Then the gathering was addressed by the outgoing president Rtr. Nemitha Weerasuriya, where he shared about his experiences and wished the incoming President and his Board for a successful year ahead. Board members for the year 2017/18 were awarded by the outgoing President for their dedication and hard work throughout the year.


Then the stage was opened to the newly appointed President Rtr. Anaam Nilar to address the gathering where he stated that “ A lot of things needed to be said, but I will be saving them to do it in action for the next 345 days to be precise” and also thanked his parents and each and every individual who supported him in his journey in Rotaract. Finally he introduced his Board of Directors for the year 2018/19, which is as follows:

After a mesmerizing entertainment item, the outgoing President and his Board was appreciated and warm wishes were extended to the
incoming President and Board by the District Rotaract Representative Rtr. PP Amjath Yusuf ,when he addressed the gathering. Addressings done by the following dignitaries were next on agenda, the District Rotaract Committee Chairman Rtn. PHF Sathendra Tharmakularajasingham and District Youth Services Committee Chairman Rtn. PHF. PP G.Sylvester.


Shanuki De Alwis, General Manager of Vision was the Keynote Speaker of the evening where she delivered an interesting speech by sharing her life experiences.


Then the Chief Guest for the evening President of Rotary Club of
Colombo West Rtn. PHF. Rohina Macan Marker addressed the
gathering. She extended her warm wishes to the newly appointed
President and the Board and praised the outgoing President and the
Board for their hard work.


Rtr. Anaam Nilar distributed Tokens of Appreciations to the distinguished guests of the evening and then the stage was opened for felicitations where Rotaractors of all other clubs congratulated the outgoing Board for their amazing job and wished for a successful year for the incoming Board. With the end of felicitations Rtr. Nimesha Jayamanne, Secretary for the year 2018/19 delivered the Vote of thanks.
With the termination of the installation everyone gathered for
fellowship and refreshments.

The Rotaract Club of University of Colombo, Faculty of Management and Finance would like to extend warm wishes for Rtr. Anaam Nilar and his Board for their appointment and a successful year ahead. 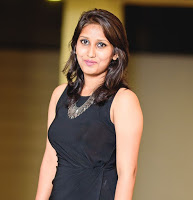