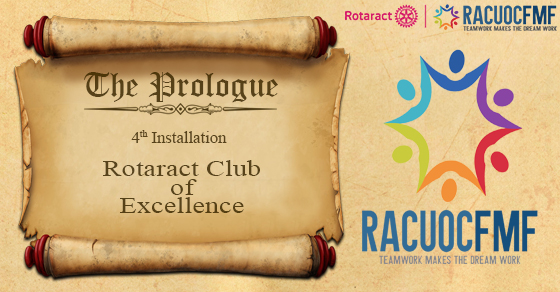 Posted at 06:03h in Installations, Others, Uncategorized by rcuocfmfadmin 0 Comments

The 4th Installation  Ceremony of the Rotaract Club of Excellence was held at DHPL auditorium on the 16th of August 2018 with Rtr. Nishadi Daluwatta and her new Board of Directors taking over their duties and responsibilities for the year 2018/19. Rtr. President Limashi Kosgodage and Rtr. Dushani Sandanayake attended the Ceremony representing RACUOCFMF.

After the lightning of the traditional oil lamp, the house was called to order by the outgoing President Rtr. Navoda Welipitiyage followed by the Flag Salutation, Rotaract Invocation, Four-Way Test and the Rotaract Song.The gathering was welcomed by the Project Chairperson Rtr. Saalim Sathar followed by the address of the ceremony by the Chief Guest, Rtn. PHF Neluka Silva. The Secretary’s report for the year 2017/18 was delivered by the Secretary of the previous year Rtr. President Nishadi Daluwatta along with a report video which highlighted the projects carried out during the year.

Next the introduction to the incoming President was delivered by Rtr. Dilanka Kumarasinghe followed by the President’s speech and presentation of Tokens of Appreciation for service by the outgoing President Rtr. IPP Navoda Welipitiyage.

After the introduction to the President for the year 2018/19 by Rtr. Dilanka Kumarasinghe, the outgoing President was called on to stage to collar the new incoming President Rtr. Nishadi Daluwatta which was the main highlight of the night.

The newly appointed President took over the stage and addressed the gathering revealing the theme for the year “Celebrating synergy, uniting hearts” and promised to give her best for the club in the upcoming year. She then introduced each Director of the board with a personalized introduction about the individual for year 2018/19 which is as follows;

Following the induction of the Board, District Rotaract Representative, Rtr. PP Amjad Yoosuf addressed the gathering and the night was added more color by the songs performed by Rtr. Navoda Welipitiyage and Rtr. Priyandan Francis and the performance on the song “Can’t Help Falling In Love” done by Sarah Hettiarachchi and Reshan Rajapaksha left the audience mesmerized.

Then the gathering was addressed by the District Rotaract Committee Chairman, Rtn. PHF Satheandra Tharmakularajasingham. In his speech, he congratulated the newly appointed Board and appreciated their efforts in trying to make the ceremony more unique. This was followed by the distribution of tokens of appreciation presented by the incoming President to the dignitaries presented. After the felicitations given by the clubs which were present at the occasion, the ceremony was concluded with the vote of thanks which was delivered by the Secretary for the year 2018/19 Rtr. Sharker Shajahan.

The Rotaract Club of University of Colombo, Faculty of Management and Finance extends their best wishes to Rtr.  President Nishadi Daluwatta and her board for a great year ahead.