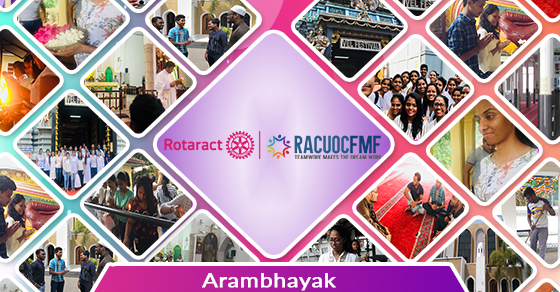 05 Aug Aarambhayak – For a Blessed Year

We have just marked the end of a monumental year with efforts pooled in by each and every club member. As we start the second half of year 2018 and the beginning of a fresh Rotaract year, we’d like to extend our heartiest congratulations and well wishes to the former Board of Directors, spearheaded by Rtr. IPP. Akila Wijetunga and Outgoing Secretary Rtr. Manahari Singarachchi for their future endeavors. They’ve officially stepped down and crowned the Incoming President Rtr. Limashi Kosgodage and Secretary Rtr. Amandi Umagiliya.


Following the new year, the kick off project of RACUOCFMF; “Aarambhayak” was held on the 30th and 31st of July 2018 for the second consecutive year.


The project was initiated to bring blessings into the journey we are expected to make, along with the required courage and confidence to make it a dream come true.


“Aarambhayak” began at the Jawatta Jummah Mosque, where the male members of our club met with a Moulavi; a Muslim religious scholar. We had a highly informative discussion with him as he shed light on several basics about Islam.


On the day 02 of “Aarambhayak”, we started off early by attending the Hindu worship service Pooja at the Manikka Pillayar Kovil, Bambalapitiya and obtained the goodness, grace and blessings of god. As our Rotary wheel rolls towards a new term, we prayed for a fresh and blessed year ahead. We watched attentively as the Pujari conducted the service through a sacred procedure to get the purest blessings from the Hindu gods. He also carried out an ‘Archanai’ to Lord Ganesh by offering fruits and flower garlands.

From there, “Aarambhayak” moved onto St. Mary’s Church, Dehiwala to obtain the blessings from Virgin Mother Mary. The Priest of the church provided us some take-home advice on facing challenges, fulfilling responsibilities and achieving great heights as Rotaractors. He also motivated us and gave valuable suggestions to start new services during the year.

On the same day, we succeeded in successfully concluding “Aarambhayak” at the Meththaramaya Temple, Bambalapitiya with an extensive cleanup session of the temple premises. It was followed by a Bodhi Pooja session to strengthen both spiritual and mental well being of us. We also donated Pirikara for the Thero and some educational materials.

With the Rotaract District 3220’s year theme being “Inspire the Future”, we’ve refreshed our plans in the hopes of creating a better tomorrow for the community and our club. The planned projects have more weight on longevity and sustainability than ever before.


Our dreams are big, calendars are full, and we are all pumped up and excited to create yet another amazing year!