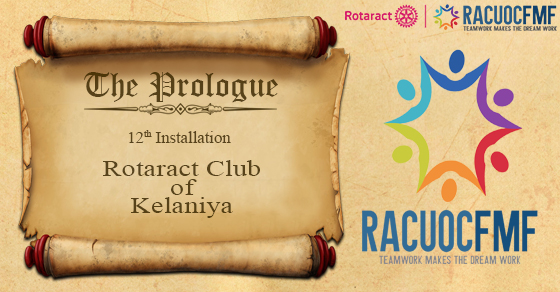 Posted at 09:15h in Installations, Others, Uncategorized by rcuocfmfadmin 0 Comments

The 12th Installation Ceremony of the Rotaract Club of Kelaniya for the year 2018/19 was held on the 5th of August 2018, at the Ceylon Chamber of Commerce Auditorium, Colombo. Rtr. Amandi Umagiliya and Rtr. Shafeeka Hafeez attended the event on behalf of our club.


The proceedings for the day began with the lighting of the oil lamp by the dignitaries followed by the Flag Salutation, Rotaract Invocation, Four-Way Test and the Rotaract Song. The dignitaries were then invited to take their respective seats at the head table.


Rtr. Ranga Samarakoon, the chairperson of the event, warmly welcomed the gathering. Afterwards, the Secretary’s Report for the year 2017/18 was presented by the acting Secretary Rtr. Chavindri Perera. In her speech she highlighted the projects carried out during the year such as the “Think Pink 2017,”  and “Game On 2017” which had won the Silver award for the Best Community Service Project and the Gold award for the Best Sports Project respectively at the 27th Rotaract District Assembly.

Next, the outgoing President Rtr. IPP Kavindra Sigera was called upon to address the gathering after a short introductory and entertaining video. He briefed the gathering on his journey as an inexperienced Rotractor to the President of the club, and how he succeeded amidst numerous challenges thrown his way. He also thanked his Board for believing in him and inspiring him on this journey, and considered it an opportunity to give away Tokens of Appreciation for his Board.


He then enthusiastically introduced and collared the incoming President Rtr. Shehana Dain, thereby officially handing over the responsibilities of the club for the year 2018/19. Rtr. Shehana Dain took us through the highlights of her Rotaract journey, while thanking the individuals who had been her pillars of support. She concluded her address by inducting the new Board for the year 2018/19.


The Board of Directors of the Rotaract club of Kelaniya for the year 2018/19 is as follows:

The gathering was subsequently addressed by the District Rotaract Representative Rtr. Past President Amjad Yousuf. In his speech, he highlighted the club’s unparalleled success in producing two past DRRs. Then he acknowledged the work of the outgoing Board under the leadership of Rtr. IPP Kavindra K. Sigera and wished all the best for the newly appointed Board.


As the Ceremony progressed through the evening, an entertainment session by Rtr. Surith Devagiri captivated the audience.

Next, the District Rotaract Committee Chairperson, Rtn. PHF Satyendra Tharmakulasingam addressed the gathering, and acknowledged the club for their many great achievements and accomplishments. He also commented on how inspiring the Rtr. IPP Kavindra K. Sigera had been, amidst all hardships and personal commitments. He expressed the need to publicly acknowledge the services of Rotaract as means to encourage more such activities, and concluded his speech by wishing the newly appointed President Rtr. Shehana Dain and her Board for a successful year ahead.


Then, the District Youth Services Chairperson, Rtn. PHF. PP. G.S. Sylvester was invited on stage to address the gathering. His words were inspirational, as he stressed on the importance of a team and the role a leader has to play. He also included well-wishes to the Outgoing Board, as well as the newly appointed Board for their future endeavors.

Next, the gathering was addressed by the Chief Guest for the day, Rtn. PHP Sugath Rajapaksha; the President of the Rotary Club of Kelaniya. As the President, he expressed his pleasure on how meaningful the projects carried out by the club had been, and how deserving the club is in being crowned as the “Emerging Club of the Year” at the 27th Rotaract District Assembly. He also encouraged the young blood of the club to carry out joint projects with the Rotary Club of Kelaniya and concluded his speech with warm wishes to the newly appointed Board.


Next, a video, along with a session was conducted by The Primary Sponsor for the day; AIA Insurance. This was followed by the awarding of Tokens of Appreciations for the dignitaries.


The floor was then open for felicitations and the installation was brought into a successful end. The Rotaract Club of University of Colombo, Faculty of Management and Finance conveys its best wishes to the President Rtr. Shehana Dain and her Board for a successful Rotaract year ahead.
Written By: 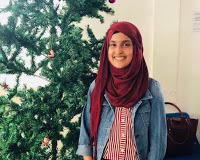