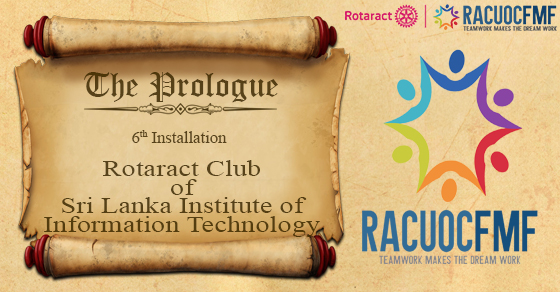 Posted at 15:55h in Installations, Others, Uncategorized by rcuocfmfadmin 0 Comments

The 6th Installation Ceremony of the Rotaract club of Sri Lanka Institute of Information Technology for the year 2018/19, was held on the 19th of July 2018 from 6.00 pm onwards at the DHPL Auditorium. The registrations started at 5.15 pm and our club was represented by Rtr. Hiranya Jayalath, Rtr. Yashika De Alwis and Rtr. Irfana Ahamed.


The ceremony commenced with the arrival of the Guest of Honor, Rtn. PHF Tania Weerasooriya who is the President of the Rotary club of Battaramulla and the Chief Guest Mr. Panduka Mallawarachchi who is the Center Head of the SLIIT Metro Campus.


After the lighting of the oil lamp by the dignitaries, they were invited to the head table, followed by the calling to order of the Installation by the outgoing President, National Anthem, flag salutation, Rotaract Invocation, the four way test and the Rotaract Song. The gathering was then warmly welcomed by the Project Co-Chairperson, Rtr. Duleesha Widyarathna.


Next on the agenda was the Secretary’s report for the 2017/2018, by the acting Secretary Rtr. Parami Paranawithana, in which she mentioned that a total of 38 projects were completed during the year including “Sihina Tharanaya”, “Light Up their World” and “A Day with Heroes.” This was followed by a short video which highlighted the achievements, events and the projects undertaken by the club during the past year.


The audience was then addressed by the President for the year 2017/18, Rtr.Vinura Ganegoda. He began his speech mentioning the award winning projects followed by thanking almost all the individuals who helped him in his Rotaract career by joining as a member to the Personal Development Director and finally as the President of this amazing movement. He concluded his final speech by mentioning that they “Escaped the Ordinary” to make it happen.

The gathering was then addressed by the incoming President Rtr. Sethil Muhandiram and he acknowledged each and every individual who supported him throughout his journey. Further, he revealed the theme for the new term; “Make it happen, Make it matter.”


Next on the agenda was the address by the District Rotaract Representative Rtr. Past President Amjad Yousuf. He mentioned the importance of the club and their membership to the District. He also appreciated and congratulated the Rotaract club of SLIIT for all the amazing work they have done through their projects such as “Sihina Tharanaya” and “Halo; Career and Professional Development Training for Women”. Then he congratulated the Immediate Past President Rtr. Vinura Ganegoda for successfully completing the past year and wished the incoming President Rtr. Sethil Muhandiram and his Board for the upcoming year. He extended his gratitude for the management and the lecturers of SLIIT, Parent Rotary club and the parents of the Rotaractors for their immense support. He concluded the speech stating “Let’s engage Rotaract, redefine friendship to serve humanity”. District Rotaract Committee Chair, Rtn. PHF Sathiyendra Tharmakularasingham then addressed the gathering.


The evening’s proceedings gathered momentum with an entertainment segment by Rtr. Diluksha Senarath. Thereafter, the Assistant Secretary Rtr. Vinuri Ramanayake introduced the Guest of Honor Rtn. PHF Tania Weerasooriya to the audience. She admired the team work and the organizational skills the Rotaractors demonstrated at their signature project “Team Alpha”. Finally, she congratulated the outgoing president and his Board on their achievements and wished the new Board for an amazing year ahead.


Next the introduction and the addressing of the Chief Guest for the day Mr. Panduka Mallawarachchi was followed by awarding tokens for the dignitaries and the felicitations.
To mark the end of the Installation ceremony, the vote of thanks was delivered by the secretary for the year 2018/19 Rtr. Parami Paranawaithana. Then, the ceremony was terminated and the attendees gathered for refreshments and fellowship.


The Rotaract club of University of Colombo Faculty of Management and Finance extends its best wishes to Rtr. Sethil Muhandiram and his Board of Directors for a successful and fantastic year ahead.