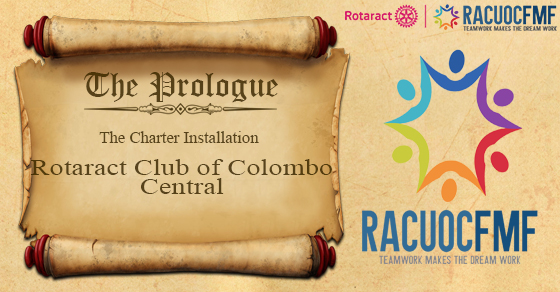 Posted at 15:44h in Installations, Others, Uncategorized by rcuocfmfadmin 0 Comments

The Charter Installation Ceremony of the Rotaract Club of Colombo Central was held on the 17th of July 2018 at the DHPL Building Auditorium. The event commenced with the lighting of the traditional oil lamp by the dignitaries, after which they took their respective places at the head table and then, the Sergeant-at-Arms called the house to order. This was followed by the National Anthem, Rotaract Invocation, Flag Salutation, Four-way Test and the Rotaract song.


As the audience took their seats, the welcome speech was delivered by the Rtn. PHF PP Merrick Peiris on behalf of the members of the Rotaract Club of Colombo Central.
Next up, an introduction to the Charter President was given by the club’s Treasurer Rtr. PP Nipun Peiris, elaborating on Rtr. Eranga Premathilake’s capabilities, potential and achievements.


Then followed the most important highlight of the event. Rtn. PHF PP Vathani Ponnampalam collared Rtr. Eranga Premathilake as the Charter President of the Rotaract Club of Colombo Central and officially handed over all the duties and responsibilities of the club to him.


Concluding his speech by thanking their sponsor club, the Rotary Club of Colombo Central, he introduced the Board of Directors for the year 2018/19 which is as follows;


Next up on the agenda was the speech by District Rotaract Representative Rtr. PP Amjad Yoosuf. He expressed his pleasure in having yet another club joining the Rotaract movement and his surprise in finding so many known Rotaract faces and Past Presidents in a charter club. He extended his sincere congratulations to Charter President Rtr. Eranga Premathilake and all charter members.


Following on, Co-District Rotaract Chairperson Rtn. Saif Ramzi addressed the gathering and he too, declared his surprise in finding Rotaract veterans who have led various clubs in the past being in this freshly chartered club. He went onto stress the fact that the membership growth rate in terms of numbers has not seen a remarkable increase in Sri Lanka as we only have around 5000 active members in an almost half century long presence in the country. He added his warm wishes to the Rotaract Club of Colombo Central.


The house was then addressed by Rotary Youth Services Chairperson Rtn. PHF PP G. S. Sylvester, where he congratulated the appointed President and his Board of Directors and shared some valuable pieces of advice from his experience. He stressed on the importance and the role the Secretary plays in a club, and advised all the charter members to support the President and take the club to great heights.


It was time for the Chief Guest’s speech. After a detailed introduction about her wonderful professional and Rotary career, the President of Rotary Club of Colombo Central Rtn. PHF Vathani Ponnampalam addressed the gathering. She expressed the pride, the Rotary Club of Colombo Central, felt by giving birth to this new club and also added as the parent club, they would give all the support necessary to the Rotaract Club of Colombo Central. In her speech, she talked about the significance of the “Four-Way Test” and that she personally feels if we practice them in life, we could achieve many things. And, ended her speech by encouraging us to increase our knowledge on Rotaract and Rotary and wishing the club all the best.


During the installation to create an awareness about the importance of the “Four-Way Test”, a card printed with the “Four-Way Test” was distributed to all who were present.
After the Chief Guest’s speech, Tokens of Appreciation were awarded to the dignitaries and then the floor was declared open for felicitations. On behalf of our club, I congratulated the Charter President and his Board and wished them all the very best for all their plans in the upcoming year.


The vote of thanks was then delivered by the incoming Secretary Rtr. Dinushika Jayatissa. With that, the Charter Installation Ceremony was terminated and all the attendees gathered for refreshments and fellowship.


The Rotaract Club of University of Colombo, Faculty of Management and Finance was glad to be a part of this historical occasion and would like to congratulate and extend warm wishes to Charter President Rtr. Eranga Premathilake and his Board for an eventful year ahead.