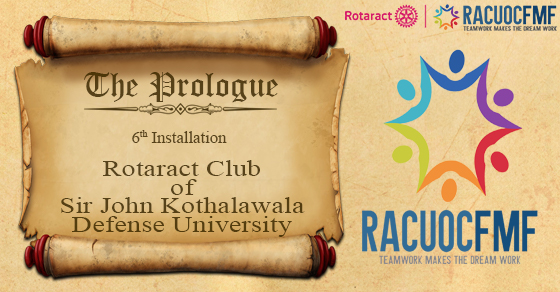 Posted at 15:52h in Installations, Others, Uncategorized by rcuocfmfadmin 0 Comments

The 6th Installation Ceremony of the Rotaract Club of General Sir John Kothalawala Defence University was awe-inspiring and proudly held on 17th of August 2018, from 6.30 pm on wards, at KDU auditorium. On behalf of our Club Rtr.Sachinthani Abeyasekara, Rtr. Supipi Godakanda, Rtr. Achini Dayarathna and Rtr. Dilmini Wehella attended this Installation Ceremony.

The Sri Lankan Army Eastern Drum Troupe welcomed the Chief Guests to the occasion. To commence the proceeding which was woven around the theme of “Shattering The Norm”, the oil lamp was lit by the dignitaries present. After which the Installation was called to order followed by the flag salutation, Rotaract Invocation, Four-way Test, the Rotaract song and the KDU song.

After observing one minute of silence in honour of our fallen Heroes who sacrificed their precious lives to extricate our country, the gathering was warmly welcomed by the Vice President Rtr. Malisha Ranasinghe. Next, the Chief Guest Major General I.P. Ranasinghe addressed the gathering. In his speech, he accentuated the Club’s unparalleled success from its very inception to current state with the club’s main objective of creating a platform for the individuals who are able to serve the society.

Subsequently, the Secretary’s Report for the year 2017/18 was presented by the outgoing Secretary Rtr. Ranishka Rathnasekara, along with a captivating video clip including photographs and the memorable moments they have shared to highlight the projects carried out during the year. She also went on to mention about some of their utmost and outstanding projects done by the club such as “3*3 Basketball Tournament”, “Kuda Oya”, “Lassana Sri Lanka”. She wished the incoming Board all the best and a hope to believe and conquer to inspire the future by shattering the norm.

As per the agenda, next up was the address by the outgoing President Rtr. Ravindu Jayakody, who was awarded as one of the most committed Rotaractor for the year 2017/18. He remarked how the Rotaract Club of KDU has given him the opportunities of inestimable value to revamp his personality, skills, knowledge and so many other things by ultimately giving something back to the society and for the good of others. He ebulliently stated that the club have become bigger and better from stage to stage by successfully completing projects along with lifelong memories. He thanked all the outgoing members, all the club members, parents, family and Faculty Advisers for the continuous guidance, support and dedication extended during his tenure. He then distributed the Tokens of Appreciation for his outgoing Board and for outstanding club members.

Rtr. Ravindu Jayakody then introduced the man of the hour, the incoming President Rtr. Harith Samarasinghe along with a chuckle-some video clip including rib tickling pictures and videos of him which was a surprise from the club to their new President. He is a prominent student and a great sportsman of Royal College and also an enthusiastic and dedicated club activist. Following on, the outgoing President collared the incoming President, thereby officially handing over the responsibilities of the club for the year 2018/19.

Then the incoming President took the podium and addressed the audience. In his speech he thanked his predecessors for entrusting him in filling the shoes as the President of the club and for guiding him throughout his journey. And also admired the

job well done by the outgoing President and his Board. Then he introduced their theme for the year “Shattering the Norm”. He also stated that he and his Board of Directors are willing to take the risks required to evade the comfort zone and to think out of the box to serve the community whilst developing themselves to be better individuals.

Next he introduced the Board for the year 2018/19. The Board members were as follows;

Then the gathering was allured by an entertaining song performed by club members. Subsequently, the District Rotaract Representative Rtr. PP. Mohamed Amjad Yoosuf addressed the gathering. He commenced his speech by elucidating the importance of dedication and commitment of the members for the expansion of Rotaract across many horizons in Sri Lanka. He also acknowledged the work of outgoing Board under the leadership of Rtr. Ravindu Jayakody and wished all the best for the newly appointed Board to continue to maintain the standards and to raise the bar even further for future Rotaractors.

Then, the gathering was addressed by District Rotaract Committee Chaiperson  Rtn. PHF. PP. Saif Ramzi and the Guest of Honour Rtn. PHF Kumudu Warnakulasooriya through inspirational speeches. Finally the token of appreciation were distributed to the dignitaries of the event which was followed by the extension of felicitations to the newly appointed Board by the Rotaract Clubs which were present at the ceremony. On behalf of our club Rtr. Supipi Godakanda wished the incoming Board the best of luck for the coming year. The installation was bought to a successful end with the vote of thanks by the incoming secretary Rtr. Devmin Abeyasena followed by the National Anthem and then the floor was open for refreshments and fellowship.

The Rotaract Club of University of Colombo, Faculty of Management & Finance conveys its best wishes to Rtr. Harith Samarasinghe and his board for a successful Rotaract year ahead.