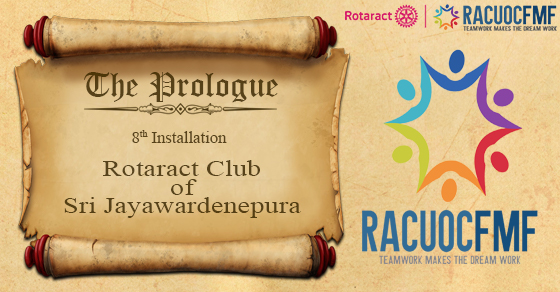 Posted at 02:57h in Installations, Others, Uncategorized by rcuocfmfadmin 0 Comments

On the 7th of August 2018, 8th Installation Ceremony of the Rotaract Club of University of Sri Jayewardenepura was proudly hosted at the Science Faculty Auditorium in the University premises.

The Ceremony commenced with the arrival of the Guest of Honor, President of Rotary Club of Battaramulla, Rtn. PHF. Tania Weerasooriya and other dignitaries. Soon after the evening was enlivened, the lighting of the Oil Lamp by the respected dignitaries, followed by the Flag Salutation, Rotaract Invocation, 4-way Test and the Rotaract Song became the commencement move in the Installation.

The day’s proceedings started off with the welcome speech delivered by the Chairperson of the Installation Rtr. Udara Liyanarathna. Subsequently, Rtr. Divya Kalansuriya delivered the Secretary’s Report for the year 2017/18 with the aid of a video clip which outlined the projects carried during the year, which showed that the butterfly effect project was their most outstanding project for the year 2017.

The outgoing President Rtr. IPP Samudya Amarasinghe took the stage next to thank all the members and the outgoing Board for the utmost support and commitment given by them throughout the year in order to achieve the club’s vision. Following the speech of the President, was the speech of the Chief Guest to express a few  words on the experiences he got throughout his career.

Next, the most awaited moment arrived which was the collaring of the newly appointed President for the term 2018/19, Rtr. Oshani Singapulliarachchi and the Club’s duties and responsibilities were officially handed over to her.

Rtr. Oshani Singapulliarachchi made a promising speech about her vision for the Club for the upcoming year which is focused on enhancing the quality aspects of the Club over quantity. Concluding her speech by thanking all those who supported her in the journey to success ,she introduced the Board of Directors for the year 2018/19 which is as follows:

Then, the gathering was addressed by District Rotaract Representative Rtr. PP Amjad Yoosuf through an inspirational speech. This was followed by the awarding of Tokens of Appreciation to all dignitaries who graced the occasion.

The house was then open for felicitations, after which the event came into a conclusion with the Vote of Thanks delivered by one of the Joint Secretaries Rtr. Saranga Madurusinghe, followed by the National Anthem.

The Rotaract Club of University of Colombo, Faculty of Management and Finance was glad to be a part of this occasion and would like to congratulate and extend warm wishes to Rtr. President Oshani Singapulliarachchi and her Board for a great year ahead.