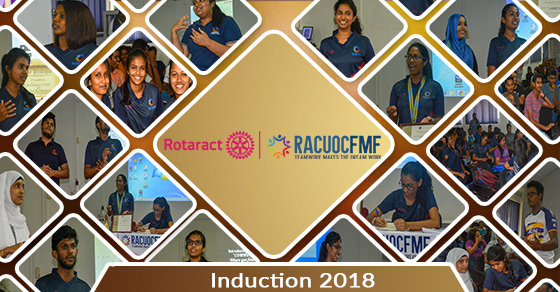 Posted at 15:11h in Avenues, Club Service, Uncategorized by rcuocfmfadmin 0 Comments
Young and energetic blood is always needed in driving a club or society to greater heights. The induction of RACUOCFMF for the freshers was held on the 17th of September 2018. The Directors of the club were enthused to present about their respective avenues and shed light on how it would be like to join this amazing movement.
The session started around 3.00 pm at the faculty premises. There was a significant number of first-years present, with obvious excitement to be part of the club. As the Sergeant-At-Arms Rtr. Ramith Kalana called the house to order, the President Rtr. Limashi Kosgodage gave away a brief introduction about the Rotaract movement. She also interacted with the potential members and broke the common misconceptions often thought by non-members.
Afterwards, there was a small ice breaking session where the 1st-years had to tell their names, along with the name of a senior they were fond of. It was indeed a fun-filled session which gave us the opportunity to get to know all the new and eager faces.
Then it was the turn for the Directors to introduce their avenues and the highlights of their key projects. Firstly, the Club Service Directors, Rtr. Shanal and Rtr. Shanali introduced their avenue with an exciting online game. Everyone registered with interest and scored points by answering the questions displayed on the screen. The questions were both fun to answer, and helpful in understanding what Rotaract was about.
Next, the Community Service Directors, Rtr. Piyumi and Rtr. Anuni introduced the avenue with a short video clip on the major projects undertaken during the past year. Rtr. Piyumi became very emotional when she spoke about how satisfying it is to serve the community and everyone was deeply moved by her words.
Afterwards, the “FMF Goes Green” initiative was introduced by the Green Life Director Rtr. Rukshan. He also mentioned the previous and upcoming projects under the avenue.


The PD Directors did a small game where a few questions were asked about the avenue and the winners were given gifts. Rtr. Randila gave out a speech explaining the importance of the PD Avenue.
Later on, the HRD Avenue, which was commenced only this year was introduced by Rtr. Sajani. Next, the IS directors introduced their avenue and its importance. This included the various opportunities that arise from the IS Avenue for the participants. Afterwards Rtr. Ashwini briefed about the Finance Avenue, and the important projects that will be carried out during the year.


PR & IT Avenues, which the directors dubbed as the marketing department of the club, were emphasized for they play two of the biggest backstage roles. Editors were the next to brief their roles, since maintaining the blog is considered to be of utmost importance.
Finally, it was Rtr. Shehani who conveyed the message about the discipline that should be maintained inside the club as the MD Director. The participants were given refreshments after the session and spent a little more unofficial time getting to know each other.


It was indeed an entertaining and valuable session for everyone since quality time was spent getting to know each other and bringing out the underlying values of Rotaract.