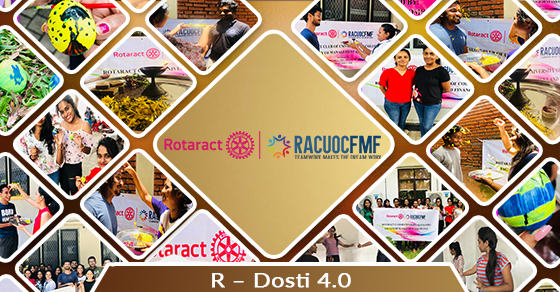 R – Dosti 4.0; the premier project under the International Services avenue of Rotaract Club of Faculty of Management and Finance, University of Colombo, in collaboration with the Rotaract Club of Dr. D.Y. Patil Vidya Pratishthan, RID 3131 of India, was held from the 24th August to the 29th of August at the faculty premises. The purpose of this project was to exchange cultural experiences, as well as to learn and encounter cultural occasions across the globe.


We started off the event on the 24th of August by gathering at the faculty premises to experience the US culture. Under this we celebrated Easter, where our club members were taken back to their childhood days.


Though, we didn’t go to church, collect chocolate eggs from our backyards or look for Easter bunnies, we painted eggs in vibrant colors, which symbolized new life and the dawn of spring. Each and every club member who participated in the celebrations came up with their own colorful Easter egg design and were pleased to re-live their childhood, and get their hands dirty with paint colors.

The next to celebrate was Rakhi. Rakhi is a celebration made up of two words; “Raksha” and “Bandhan.” According to Sanskrit phrasing, the event signifies “the tie or knot of protection” where “Raksha” stands for protection and ‘Bhandan” implies the verb to tie. Together the celebration symbolizes the eternal love between a brother and sister regardless of their blood relationship. It is also celebrated among cousins, brother and sister-in-laws, and fraternal aunts and nephews.

On the 26th of August, we did the rituals by lighting a “diya” or earthen light, which represents the God of fire. We then performed the “aarti” or worship, by the girls of the club. Prayers were said and a “tilak” or colored spot was marked on the forehead of the fellow brothers of the club. After the tying of rakhi around the wrist by the girls, sweets were fed to each other to symbolize the auspicious event. The girls were also given gifts by their fellow brothers as a token of blessing. All the members were grateful to be part of this as it was a beautiful occasion to celebrate the brotherhood within the club as well.

Afterwards, the Argentinian culture was celebrated by our club members where we tangoed to the steps taught by Rtr. Diani Rajapakshe. This dance was the most challenging as it involved faster and sharper dance moves. But, at the end, we were able to enjoy ourselves by being a part of it and exposing ourselves to such a wonderful culture.

The successful completion of “R – Dosti 4.0” by celebrating the four cultures assigned to our club would not have been possible without our beloved club and non-club members. Hence, we extend our heartfelt gratitude for their commitment and eagerness to take part in the festivities.


We would also like to thank the Rotaract Club of Dr. D.Y. Patil Vidya Pratishthan, RID 3131 of India for collaborating with us and being a part of this amazing project from the very beginning to the end.