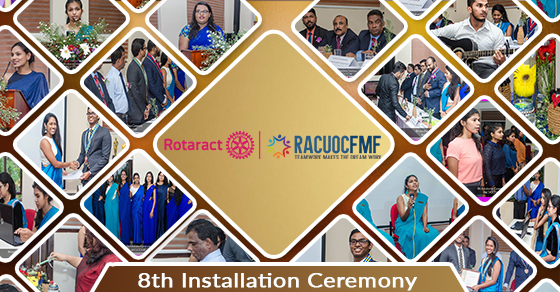 Posted at 10:31h in Uncategorized by rcuocfmfadmin 0 Comments
The much awaited event of the year finally arrived after many anxious days and sleepless nights of planning. The 8th Installation Ceremony of The Rotaract Club of University of Colombo, Faculty of Management and Finance was held on the 21st of August at the Faculty Premises. Following the enthusiastic preparations made by the members, the beautiful Ladies in the shades of blue and the handsome Gents in their smart attire were more than ready to begin the proceedings for the day.

Following the registration of more than 150 Rotaractors, the Ceremony started off with the arrival of the Dignitaries: the Chief Guest, Dr M.P.P. Dharmadasa, Dean of the Faculty of Management and Finance, The Guest of Honour, Youth Services Chair for the  Rotary Club of Colombo Mid Town, Rtn. PHF PP Numan Zarajudeen, District Rotarct Representative Rtr. PP Amjad Yoosuf. The presence of the The District Rotaract Committee Chairperson Rtn. PHF Sathiyendra Tharmakulerajasingham and the District Chairman Youth Services Rtn. PHF G. S. Sylvester  were recognized shortly.

Following the lighting of the oil lamp by the Distinguished Guests, the House was called to order by the Sergeant-At-Arms, Rtr. Ramith Kalana. The DRR and the Outgoing President were collared by the Sergeant-At-Arms. The National Anthem, Flag Salutation, Rotaract Invocation and the Rotaract Four-Way Test were read out by Rtr. Supipi Godakanda, which was followed by the Rotaract Song.
The audience was welcomed by the Co-Project Chairperson Rtr Shanali Kaluthanthri.

The Secretary for the year 2017/18, Rtr. Manahari Singarachchi was invited to read out the Report for the previous year, followed by a presentation that outlined the projects carried out during the year, including the outstanding achievements of the club.

The President for the year 2017/ 18, Rtr. IPP Akhila Wijetunga was called upon to address the gathering. He then presented Tokens of Appreciation to his Board of Directors, appreciating their love and commitment towards the club.

After being collared and the Gavel being handed over, the newly appointed President Rtr. Limashi Kosgodage addressed the audience. She expressed her gratitude to all those who helped her throughout her journey. And it was time to introduce her Board of Directors for the year 2018/19. 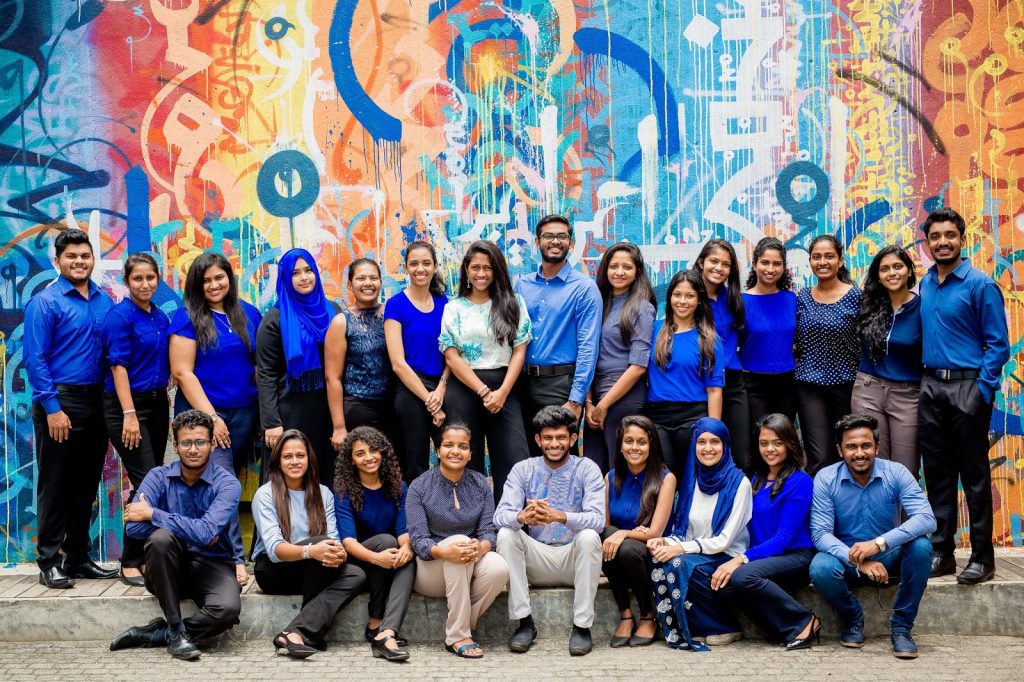 A set of wonderful introductions along with a series of entertaining videos introduced the Board of Directors as follows,

Next on the agenda was the launch of a very special project initiated by the club. Under the Green-Life Avenue, it was suggested that the club would take the lead in reducing the usage of plastic and polythene in the future. Thus the Project “FMF Goes Green” was  officially launched. We hope all clubs would join hands in expanding this project for a better, Eco-friendly future.

Following the introduction of the District Rotaract Representative, by Rtr. Thilini Costa, the gathering was addressed by DRR Rtr. PP Amjad Yoosuf. He congratulated the newly appointed Board of Directors and mentioned that the District would be happy to support the club in all possible ways.

The gathering was then addressed by the District Rotaract Committee Chairperson Rtn. PHF Sathiyendra Tharmakulerajasinghm. He was introduced by Rtr. Ashwini De Silva. He congratulated the Outgoing Board on a job well done and wished the Incoming Board all the very best for the future.

Next on the agenda was a very entertaining item performed by the members of the club. The Guest of Honour, Rtn. PHF PP Numan Zarajudeen was then invited to address the gathering. He was introduced by Rtr. Piyumi Abeywardana. While conveying his wishes to the members he mentioned that the club should strive to achieve not Gold, but Platinum awards at the next Rotaract Assembly.

Followed by the introduction of The Chief Guest for the evening, by Rtr. Thilini Costa, the Dean of the Faculty of Management and Finance was then invited to address the gathering. He was proud of the effort put in by the club in order to carry out multiple projects. While wishing us all the very best, he encouraged the club to perform better in the future.

Tokens of Appreciation were presented to all the distinguished guests for taking time off their busy schedules to share the joy of this wonderful occasion. The floor was then declared open for felicitations and heartfelt wishes were extend to all the members for a successful year.

The Secretary for the year 2018/19, Rtr. Amandi Umagiliya was invited to deliver the Vote of Thanks which marked the end of the 8th Installation Ceremony of the Rotaract Club of University of Colombo, Faculty of Management and Finance. As an appreciation of the presence of the fellow Rotarctors, a gift which contained seeds to be planted was presented. This was shown as an invitation to join hands to work towards a greener future. The attendees were then invited to enjoy for refreshments.

As the members of the club, we would like to congratulate the newly appointed President Rtr. Limashi Kosgodage and her Board of Directors all the very best for a successful year.