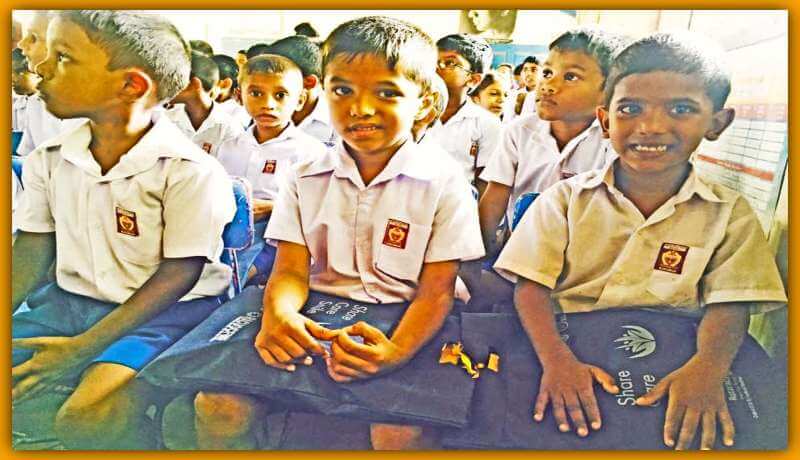 Share Care Smile is based on a modest thought of showing care to those in need, by sharing what we have, and putting a smile on the faces of those who hold the future of this nation. Moreover, the campaign and workshops of the project paved a way to educate children of private and international schools on the significance of sharing what they have with the underprivileged children.
The chairs of this project were Rtr. Ashkar Ajward and Rtr. Ravisha Saparamadu. This year, the school selected was Gungamuwa Maha Vidyalaya in Horana and it comprises of 213 students who belong to mostly financially underprivileged families and also some families relocated after the Tsunami. The project committee and club members were able to collect both cash and non-cash donations. A large portion of donations were received from Mukarramah International School, Dematagoda.
As for the project, to our delight, it took place on the most awaited day for children; 1st of October. A warm welcome had been organized by the school staff, along with refreshments. We were treated with much respect and recognition. The Principal expressed her pleasure, and believed that our presence would make the little ones look up to us as role models, dream big and make use of higher education.

Since it was the Children’s Day, the school had organized a concert, in the middle of which the distribution of gifts was planned. An introduction speech about the project Share Care Smile was delivered by Rtr. Ravisha Saparamadu. It was followed by the distribution of stationery gift packs class by class from Grades 01 to 10 by the project committee members. The distribution of stationery packs to the Grade 11 students, who were to sit for the Ordinary Level examination at the end of this year, was done by the very dedicated school Principal herself.

The happy smiles on the faces of little ones, and the enthusiasm at which they opened the gifts were moments that’d be etched into our memory for years to come. We also encountered a pair of twins who could not walk. When inquired about not opening their gift packs, they were emotional about saving it to their younger brother at home. We were so touched as we made sure each of their siblings had a gift to cherish on the Children’s Day.
To sum it up, our club President Rtr. Limashi Kosgodage spoke a few words on the importance of education and the vital role one plays in achieving it. Her words were truly inspirational to everyone present. Rtr. Achini Dayananda then officially concluded the project with a Vote of Thanks.

Share Care Smile was indeed a project done from the bottom of our hearts. We were immensely grateful for the opportunity to have delivered the message of what life looks like from outside of the small world these kids were used to seeing, and the significance of investing in education.
Written By:
Rtr. Aneesha Ziyam
(Member 2018/19)