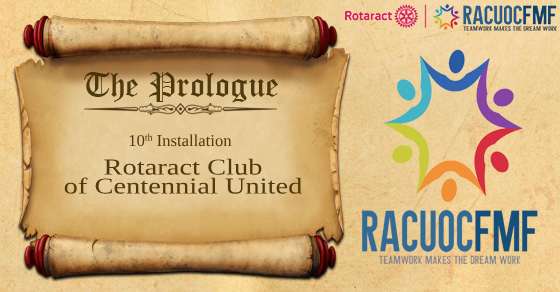 Posted at 07:22h in Installations, Others, Uncategorized by rcuocfmfadmin 0 Comments

The 10th Installation ceremony of the Colombo Centennial United  was held on 03rd of August 2018 at the DHPL Building Auditorium. Rtr. Achini Dayarathne and Rtr. Yashika De Alwis attended the Ceremony representing RACUOCFMF.

The event commenced with the arrival of the Dignitaries of the event, District Rotaract Committee Chairman Rtn. PHF Sathyendra Tharmakulerajasingham,  Rtn. PHF G.S. Sylvester followed by the Chief Guest, President of the Rotary club of Colombo Centennial Rtn.Tissa Dissanayake. Then the event continued with the lighting of the Traditional Oil Lamp by the Dignitaries, after which they took their respective places at the head table and then, the Sergeant-at-Arms Rtr. Harshaprathanr called the house to order. This was followed by the National Anthem, Rotaract Invocation, Flag Salutation, Four-way Test and the Rotaract song.

The ceremony was then carried out with the welcome speech done by the Chairperson of the installation and then the Secretary’s report for the year 2017/18 was delivered to the audience by the Past Secretary Rtr. Anushka Leelananda. After Past Secretary’s speech, the outgoing President Rtr. IPP Suchithe Malawikankanamge took the stage to thank the outgoing Board, all the Club members and non-club members who helped him during last year in order to achieve the expected goals to fulfill the vision of the club.

Then as per the agenda next was the most awaited moment of the ceremony. The President for the year 2018/19, Rtr. Joel Swamidoss was gracefully collared after which he proceeded with his speech by introducing the vision for the new Rotaract year under the theme, “Inspired to Serve” and also he thanked the individuals who helped him throughout his journey. Concluding his speech by promising to give his maximum to the Club towards achieving the Club goals, he introduced the Board of Directors for the year 2018/19 which is as follows:

The induction of the Board of directors was followed by the speech and felicitations by the District Rotaract Representative Rtr. PP Amjad Yousuf. In his speech he emphasized on the fruitful endeavors of the Club for past few years. Next in line was the speech of the District Rotaract Committee Chairman, Rtn. PHF Sathyendra Tharmakulerajasingham. The final speech was delivered by the President of Rotary Club of Colombo Centennial Rtn. PHF G S Sylvester and then the Tokens of Appreciation were distributed by the incoming President to the Dignitaries presented. The Ceremony was concluded with the felicitations given by the other clubs present at the ceremony, which was followed by the Vote of Thanks delivered by the Vice-President for the year 2018/19 Rtr. Anushka Leelananda.

The Rotaract Club of University of Colombo, Faculty of Management and Finance extends their heartiest felicitations once again to Rtr. Joel Swamidoss and his board for a great year ahead.