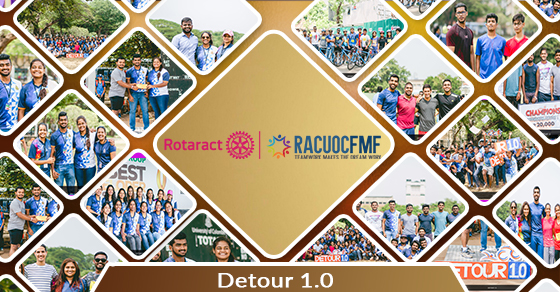 Posted at 15:42h in Avenues, Finance, Uncategorized by rcuocfmfadmin 0 Comments
Detour 1.0; a triathlon organized by the Rotaract Club of Faculty of Management and Finance, University of Colombo, featuring swimming, running and cycling, came to light on Saturday, the 19th of January, 2019 at the Thurstan College Swimming Pool Complex.


An event of this caliber was organized for the first time by the club and the purpose of it was to raise funds for a Community Service Project, namely “Wasath Sarani.” This project aims to provide a pure drinking water supply system to the residents of a village in Malsiripura, located in the Kurunegala district.
As expected, the bustling streets of Colombo 7 was quieter on the early Saturday morning. However, the Thurstan College Swimming Pool Complex was in full swing the moment all the energetic athletes walked in to get the ball rolling.Detour 1.0 brought together 15 enthusiastic teams, each consisting of 4 individuals. Shortly after registrations, Detour 1.0; the ultimate triathlon experience, officially commenced with the unfolding of the first episode of power. Swimmers of all teams made a splash to complete 4 laps of 25m which was an arduous task indeed. This was followed by an interesting team challenge where each team had to collect clues in order to proceed further in Detour.

Soon after collecting the clues, the two runners of each team kick started the second episode of power; the road race while hunting for the hidden objects along the streets of Colombo 7. It was truly a thrill to witness the enthusiasm of the participants as they dashed along the road during this phase.


The third episode of power; the cycle race began as soon as the runners left the swimming pool complex and it undoubtedly became a hit that captured the attention of many. The parade of cyclists rode along the given route with the sole aim of securing more points for their teams.

Once the runners and the cyclists entered the University of Colombo grounds, the outbound session; the final event for the day began, following refreshments. This session, a measure of team spirit, turned out to be the most favorite session of many contestants as they completed one challenge after another, laughing, cheering and most of all, enjoying it to the core.

After one daring expedition, having conquered each and every challenge bravely and smartly, team “Kalabala” walked away as the Champions of Detour 1.0 while team “Hatharadenaama Soorayo” managed to clinch the Runner-Up title.

Detour 1.0 ended on a successful note, thanks to the collective efforts of the organizing committee and the members of our Rotaract Club. We are extremely grateful to all those spirited individuals who contributed towards this worthy cause and especially to all the teams whose participation was one of the main ingredients in the recipe of success of Detour 1.0. The memories of Detour 1.0 shall remain as vivid as it can be. The checkbox of another milestone along the journey of Project “Wasath Sarani” has been successfully ticked. As our club goes by the motto,“Team work makes the dream work,” we hold the aspiration to bounce back bigger and better with Detour 2.0!