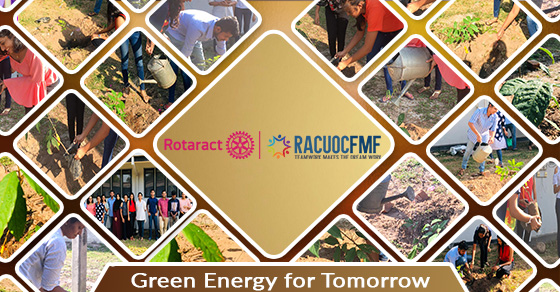 Our lives depend on earth and earth selflessly provides us every single thing we want in order to live. As human beings, it is our duty to protect the planet earth and its resources for our future generations. Rather than protecting, humans are more into destroying it and one major outcome of it is global warming.

Even though people have identified this problem and held themselves responsible, still global warming has been a concept limited to books and we only see a limited amount people giving true effort to solve this problem out of billions of people living on earth whereas it’s the responsibility of each and every individual to a make an effort to put a full stop to this problem.

We can say that on one hand, mother earth is being selfless and on the other hand, humans are being selfish as they don’t think about other lives on earth and those lives will also loose earth due to our activities. As a true effort, members of Rotaract Club of University of Colombo, Faculty of Management and Finance initiated “GET”:, Green Energy for Tomorrow. GET is a project under the International Service Avenue along with the Rotaract Club of Hydrabad Himayathanagar and the Roataract Club of Dr. D.Y. Patil Vidhya Prathisthan, India.
The project was initiated with the aim of uplifting the natural environment by providing more green plants which play a vital role that fight for the health of earth and to save green energy for future generations. The project was held successfully under guidance of two chairs: Surani Feranando and Mindula Chulitha, on the 7th of January 2019 and we planted 5 plants within the faculty premises. Other 2 clubs were also invited to carry out the project within the 2nd or 3rd week of January.

Club members have taken the responsibility of maintaining the plants as planting the trees are not enough and a monthly a month update of the growth of the plants were requested from the other two clubs as well. It doesn’t matter whether the effort we take is small or big; what matters is that the effort we take has to be true. Rather than wasting time on discussing what we can do, we should do what we can even if it’s a small initiative in order to protect earth because, even one tree we plant is valuable in bringing our mother earth back to her good health.