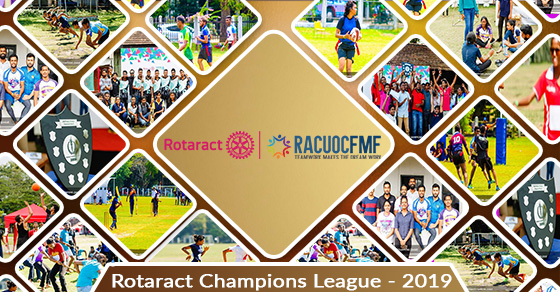 Posted at 03:58h in District Events, Others, Uncategorized by rcuocfmfadmin 0 Comments

The greatest, most awaited and the annual sports encounter of the Rotaractors:- Rotaract Champions League, was successfully held on the 2nd, 9th and 10th of February 2019. The sportsmanship was spread throughout different sports, both track and field events. It was a great pleasure to see the enthusiasm of all the young Rotaractors who attended the opening ceremony representing different clubs, who were all curious to face the defined challenges.


Day 1
The kick- off of this three days event was held on the 2 nd of February at the Royal College Sports Complex, which was embraced by a significant number of clubs that marked an increased participation than the previous year. Representing our Club, the Rotaractors:- Peshala, Limashi, Kisal, Lahiru, Hasangi, Buddhika, Ahamed, Christopher, Thilini, Kavindi, Amandi, Amila, Rukshan, Shanal, Surani, Malaka, Piyumi, Achini, Adeepa, Kavindi Bhagya, Rahal, Rushda, Mussadick, Diani and Ashkar participated in these events.


Day 3
The final and the 3 rd day of Rotaract Champions League was held on the 10th of February 2019, featuring Athletics and Tug ‘O’ War at the University of Colombo grounds. Athletics consisted of categories including men’s and women’s 100 meters and 200 meters sprinting, 100*4 and 200*4 relay , and long distance running. The Tug ‘O’ War, was on of the events that grasped a lot of attention and cheering as it showed the real strength of all the participants from each club and was interestingly joyful to see.Men’s Tug ‘O’ War championship was grabbed by Rotaract Club of Alumni of University of Moratuwa, and women’s by Rotaract Club of KDU.


Then, came the most awaited moment of all three days, the moment which reaped the fruits of all the sacrifices and efforts of all Clubs, the Awarding ceremony. By maintaining a constant momentum with a marvelous 1483 points, the Rotaract Club of Excellence became the overall champions. The Rotaract Club of Sir John Kothalawa Defense University became the runners-up with 1284 points in total, a club that always showed extra-ordinary skills for sports. The Second Runners-up position was secured by the Rotaract club of Sri Lanka Institute of Information Technology with 678 points.


With the refreshed sportsmanship, enhanced friendships and bonding, the Rotaract Champions League concluded while upholding the promise of meeting next year with a fresher, improved and different sports experience. Win or lose, it is important to uphold the spirit and energy to make changes that we wish for. Therefore, Rotaract Club of University of Colombo , Faculty of Management and Finance congratulates all the winners and wishes Good luck for all the Clubs for coming years and specially thanks to all the initiators for their utmost endeavors.