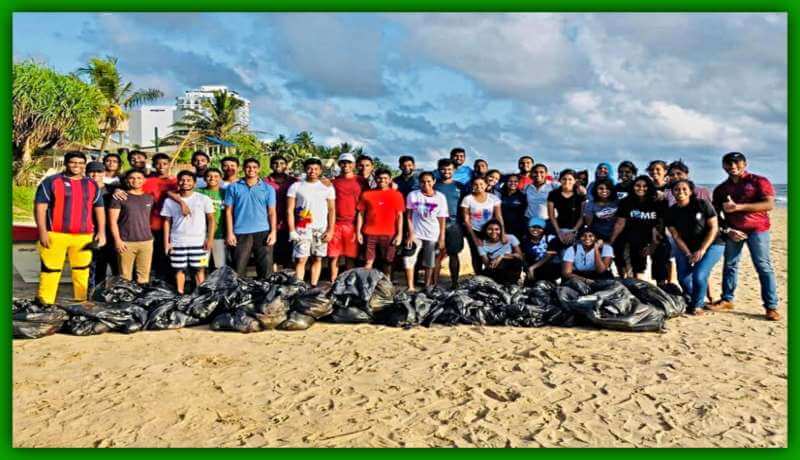 Sri Lanka’s coastal waters are a proud home to over 180
species of fish, five species of marine turtles that nest on beaches along the
coast and 30 species of marine mammals including endangered species. Sri Lanka is also most fortune to have coral reefs which is the home
to a quarter of marine species.

Despite all this exotic marine life around us, it’s sad to say that Sri Lanka is the world’s fifth
largest plastic polluter of the ocean with 1.6 million metric tons of plastic
dumped into the ocean every
year.
Plastic debris is fast becoming the greatest threat to
oceans. Marine wildlife species are severely affected as they ingest plastic or
are strangled by it. Since plastic is not biodegradable it remains in the
marine environment for centuries, fragmenting into smaller pieces that accumulate
on the sea floor and blocking the exchange of gases.Plastic travels through
the food chain, ultimately ending up in sea food destined for human consumption.
Pollution also destroys the recreational value of beaches which is a foreign
exchange earner. It affects the revenue and employment from tourism.
Above explained problems within the ocean environment are
complex and interrelated and there is no single action that can provide a
solution to such problems. Actions should be taken at global, national,
sectoral and even at individual levels.
With that in mind, we, the Rotaract Club of University of Colombo, Faculty of Management and Finance joined hands with the Rotaract Club of Colombo East
and the Interact Club of St. Peter’s College and carried out the project “Sandtastic ’19.” Through this project, we aimed to sustain the
beach environment and the marine life in the famous coastal area of Mount Lavinia

This project consisted of 2 phases. As the 1st phase, we conducted a survey on the 20th
of April on seaside trash accumulation and its affects on the day-to-day
lives of residents near the beach. According to them, the hotels near
the beach are also responsible for the residue getting accumulated in the
coast since they litter the beach after
having certain events or functions.They further mentioned that trash comes
through some canals near the coast and cause the trash to get accumulated in
the beach .We also learnt that the municipal council collects people personal
garbage twice a week and beach trash once a week but on the days that the
tractor doesn’t come people bury the trash. This trash is unearthed by the rain and ends up accumulated in the ocean, destroying marine life.

Those who don’t bury, end up burning the trash instead – polluting air, water and land in the process. Needless to say, this toxic air, when inhaled by people, results in various respiratory diseases. And the toxic ash
that remains is either blown away or mixed into the
sand. We took measures to document these issues and forward it to the municipal council.


The 2nd phase was a coastal cleanup conducted on
26th of May along the coast of Mount Lavinia. Club members of all 3
clubs gathered on this Sunday afternoon to protect and preserve the coastal
environment. They collected tons of plastic waste like water
bottles, straws, yogurt cups and spoons, toffee wrappers along with glass
bottles and items of clothing like slippers. For about 2 and half hours they picked up and unearthed waste which was then disposed by the municipal
council.