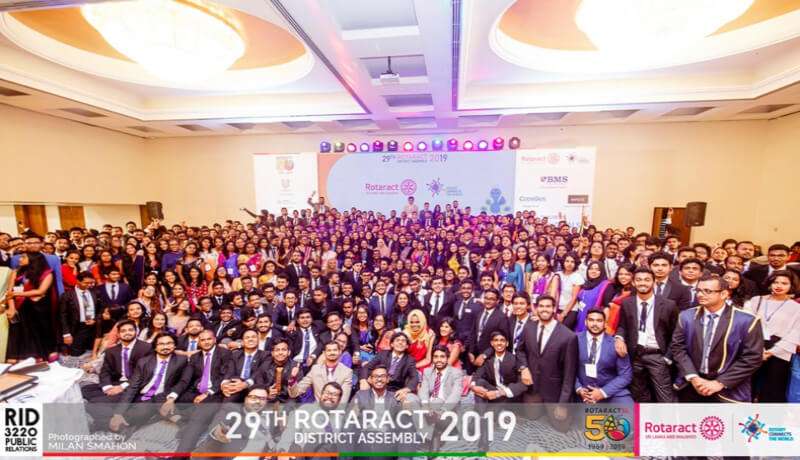 Posted at 15:00h in District Events, Others, Uncategorized by rcuocfmfadmin 0 Comments

The 29th Annual Rotaract District Assembly was held on the 23rd of June 2019 at the Water’s Edge Hotel premises which saw the participation of avid and excited Rotaractors in numbers including 6 members from our very own club – RACUOCFMF. It truly was an exceptional event this year as it coincided with the celebration of the milestone of “50 Years of Rotaract” in Sri Lanka. A reminder of the importance of celebrating this milestone together as one movement was given through a video outlining the marvelous projects and initiatives taken by the movement. This was indeed a fulfilling and heart-warming reflection on the achievements of the past year.

Next in line was the graceful collaring of the New District Rotaract Representative Past President Krishan Balaji followed by the induction of the District Steering Committee for the year 2019/20 by him. In his speech, he stated that literacy improvement and eco-friendliness would be two significant focus areas of the upcoming Rotaract year and went on to express his belief in how “We are always more powerful than we believe ourselves to be.”

Afterwards the well-known duo Gehan Blok and Dino Corera addressed the gathering by means of a video in which they highlighted the importance of living in harmony while understanding and respecting the diversity in the country that we are blessed with as “Sri Lankans."

The Chief Guest for the evening -Dr. Vinya Ariyaratna too continued on this same line of thoughts in addressing the gathering. He further explained the significance of the role to be played by the youth in maintaining harmony and peace as one nation while making a heart rending reference to the unforeseen tragedies recently experienced by the Sri Lankan community.

The Rotaract Club of the University of Colombo, Faculty of Management and Finance (RACUOCFMF) was awarded the following prestigious awards and certificates at the 29th Rotaract District Assembly 2019.

-The Spirit of Service for the Rotaract Club of University of Colombo Faculty of Management
and Finance - Rtr. Sachinthani Abeysekara

- The Most Outstanding Blog – (Gold)

It was also enlightening to witness the efforts of a few Past Rotaractors who contributed to the movement immensely being recognized and greatly appreciated. The 29th Annual District Rotaract Assembly –A day of glory and inspiration, concluded with the District Club Services Director addressing the gathering in which each and every individual who helped to make the event a success was acknowledged for their efforts.

RACUOCFMF extends its Heartiest Congratulations to all the other clubs for their outstanding achievements and RACUOCFMF is proud to have been part of yet another Outstanding District year championed by talented fellow Rotaractors. Furthermore, we extend our heartfelt gratitude to the IPP. DRR. Amjad Yoosuf and his District Steering Committee for being constantly supportive throughout the year. In conclusion, we convey our Best Wishes to the newly appointed DRR. Rtr. Krishan Balaji and his District Steering Committee for a fantastic year ahead!