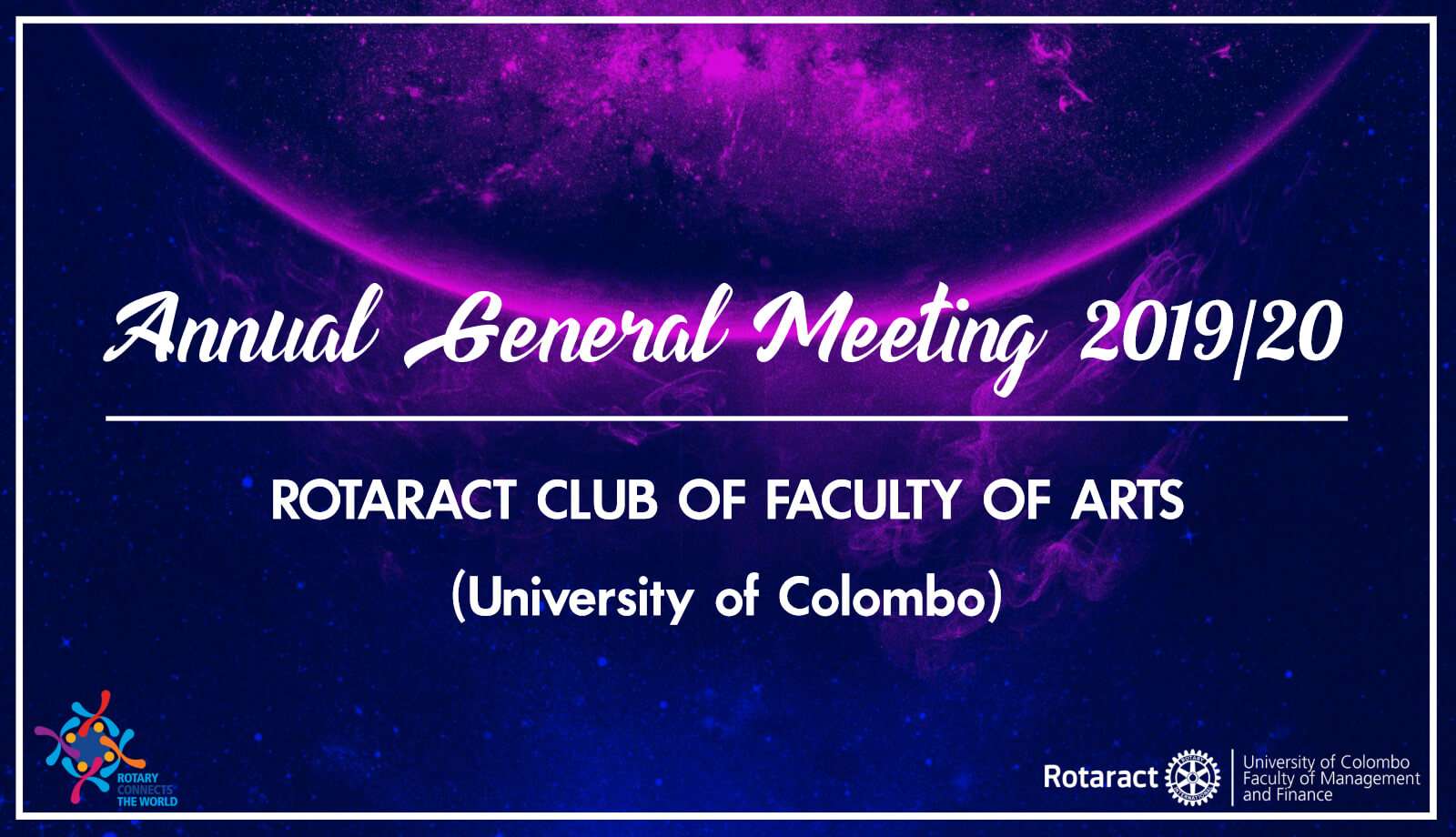 Posted at 15:01h in Installations, Others, Uncategorized by rcuocfmfadmin 0 Comments

The Annual General Meeting of The Rotaract Club of University of Colombo Faculty of Arts was held on the 12th of July at The Economics Auditorium within the Faculty Premises. 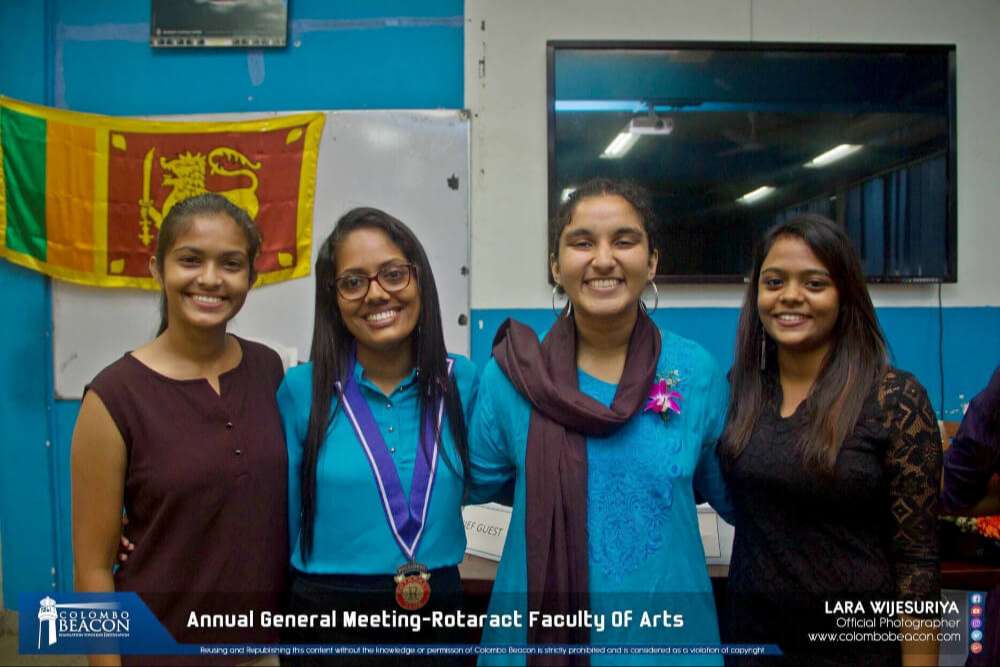 The meeting began with the welcoming of the guests and the invitees present to share the wonderful moment of beginning yet another era. The following Dignitaries were invited to take their seats at the head table; The Rotaract District Representative PP. Rtr. Krishan Balaji, Guest of Honour - IPP of the Rotary Club of Colombo Uptown Rotarian Paul Harris Fellow - Nomal Wijeratne, Chief Guest- the Dean of the Arts Faculty of University of Colombo - Professor Premakumara De Silva, President for the year 2018/19- Rtr. IPP. Dinandi Samaraweera, Secretary for the year 2018/19- Rtr. Koshila Kariyapperuma and the President for the year 2019/2020- Rtr. Rasanjanee Polgampala.

The special guests and the invitees were warmly welcomed by the Member Representative Rtr. Chantal Dassanayake. It was then followed by the Secretary’s Report for the year 2018/2019, where the main projects conducted by the club were mentioned while emphasizing the importance of increasing the number of active members in the club. Within the past year the club had focused on increasing the member’s active participation which was an important criterion in carrying out the activities of the club successfully.

The President for the year 2018/19 was called upon to address the gathering for one final time. Rtr. IPP. Dinandi reminisced about the wonderful memories created within the year and she further mentioned that it is vital to make members aware of how important it is to be actively involved in the movement in order to be able to learn, grow and extract the maximum use of what the movement has in store for every individual. She then concluded her speech by thanking all the individuals for supporting her throughout the year and helping her in fulfilling her duties as the President for the year 2018/19.

Then the most awaited moment of the evening arrived. The President for the year 2019/20   Rtr. Rasanjanee Polgampala was collared as the newly appointed President to take forward the duties and further enhance the value of the club. Rtr. Rasanjanee then addressed the audience and explained that the club would progress while believing in the slogan “United We Stand in Diversity.”

Rotaract is a movement that offers opportunities to all individuals irrespective of their race, religion and any other differences. This is why the Rotaract Club of University of Colombo Faculty of Arts also strongly believes in staying united to achieve its goals as one club. Rtr. Rasanjanee then moved on to introducing her Board of Directors to all present at the meeting. 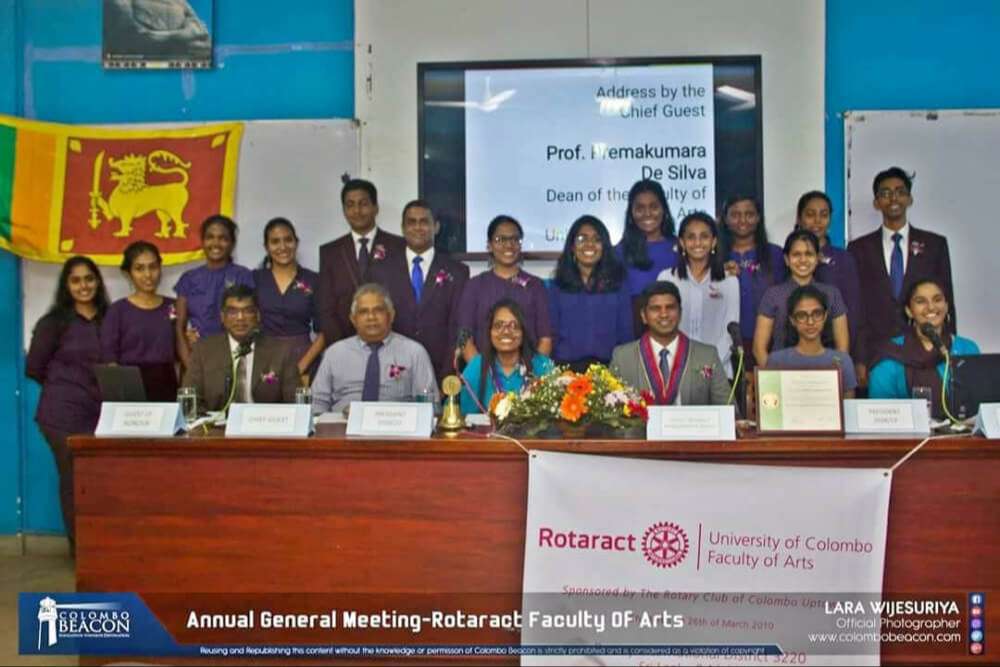 The District Rotaract Representative PP Rtr. Krishan Balaji addressed the audience and mentioned that Rotaract is a movement filled with so many challenges that makes it a wonderful experience to all involved in it and wished the newly appointed Board all the very best for a successful year ahead.

The Chief Guest, Dean of the Faculty - Professor Premakumara De Silva then addressed the audience and appreciated the club for all the magnificent projects carried out within the past year and promised to extend his fullest support in further maintaining the standards of the club. The Guest of Honor- IPP of the Rotary Club of Colombo Uptown Rotarian Paul Harris Fellow - Nomal Wijeratne also commended the Past President and her Board of Directors on a job well done while focusing on the importance of the movement and the service it does to the society.

Afterwards, Rtr. Rasanjanee was called upon to hand over the Tokens of Appreciation to the special guests for their presence at this momentous occasion. The floor was then open for all invitees to share their best wishes with the newly appointed Board of Directors to be able to successfully complete another amazing year of Rotaract.

The newly appointed Secretary Rtr. Haadiyah Marikar was invited to deliver the Vote of Thanks and she was ever so grateful to all those who extended a helping hand in carrying out all the projects within the past year and thanked all the invitees for sharing the joy of this special occasion.

The meeting then concluded with the invitation extended for fellowship and refreshments to all those present at the Annual General Meeting for the year 2019/20. Once again, the Rotaract Club of University of Colombo, Faculty of Management and Finance (RACUOCFMF) would like to extend warm wishes to Rtr. Rasanjanee and her board for a wonderful year ahead!