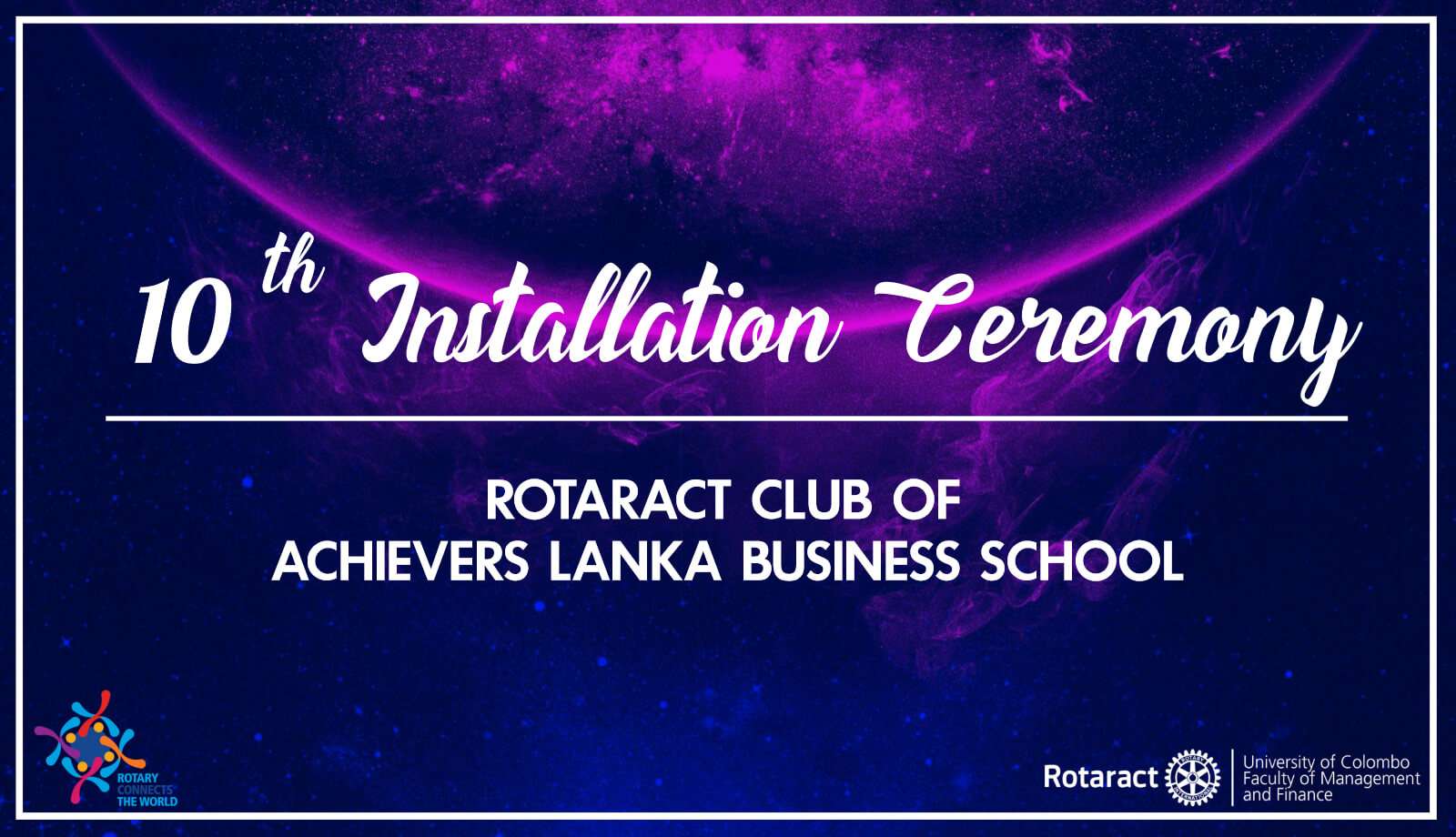 Posted at 00:52h in Installations, Others, Uncategorized by rcuocfmfadmin 0 Comments

The 10th Installation Ceremony of the Rotaract Club of Achievers Lanka Business School was held on the 21st of July 2019 at the CIMA Auditorium Colombo 05. The ceremony officially commenced with the lighting of the oil lamp after which the Sergeant at Arms called the house to order. This was followed by the conventional formalities; The Rotaract Pledge, Invocation, 4 Way Test, Flag Salutation and the Rotaract Song. The gathering was warmly welcomed by Rtr. Hashini Wickramasuriya and Rtr. Nicolas Nuhuman, the Joint Project Chairpersons of the Installation who stated that it was a synergy of the club members’ efforts that contributed to bring a smile on to the faces of those in dire need. 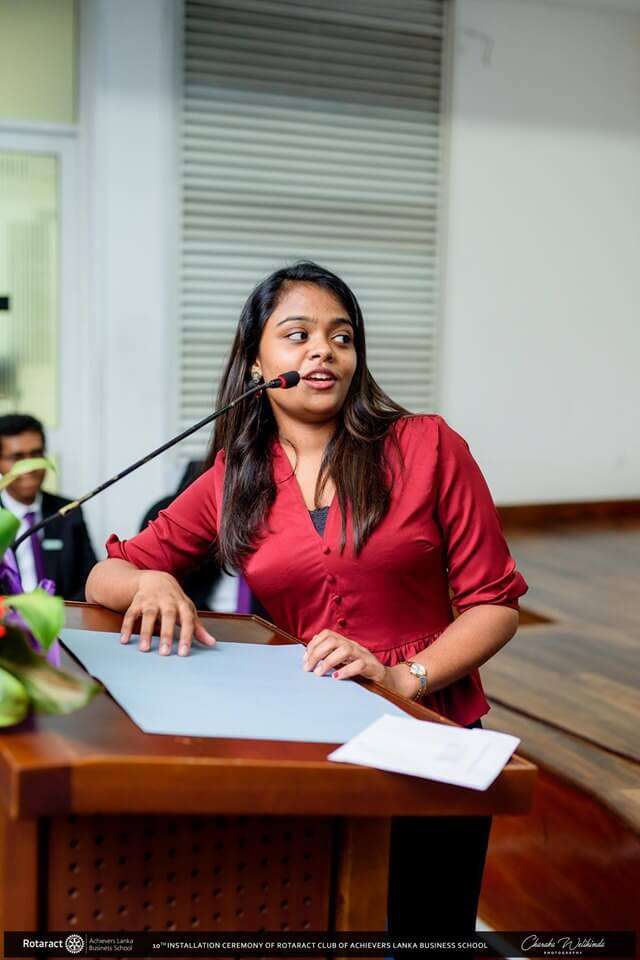 Afterwards, the Secretary’s Report for the year 2018/19 was delivered by the Past Secretary Rtr. Sathma Jayasinghe who was also recognized as one of the “Most Outstanding” Secretaries at the 29th Rotaract District Assembly Awards. This report shed light on the fact that the club had successfully executed 41 projects across all avenues over the Rotaract calendar year making them deservedly win several District Assembly Awards including “The Most Outstanding Club” award. Projects Jumpstart, Ayubowan Aspiract and Conquer Colombo were highlighted as signature projects that they were part of and were known for.

Next was the Address given by the Outgoing President Rtr. IPP Hamdhan Sulaiman who was also recognized as one of the “Most Outstanding” Presidents at the 29th Rotaract District Assembly Awards. He quoted Eleanor Roosevelt a former First Lady of the United States by saying, “The purpose of life is to live it, to taste experience to the utmost, to reach out eagerly and without fear for newer and richer experience.” The exemplary contributions made by various individuals and the memories made throughout the club’s journey were remembered by him with a deep sense of gratitude. Rtr. Hamdan’s journey last year which seemed a tale of loss, love and triumph is undoubtedly a source of inspiration to all of us!

This was followed by Rtr. Navodhya Jayasinghe introducing his very own sister as the Incoming President for the year 2019/20, Rtr. Sathma Jayasinghe. Quoting the famous fictional character “Dumbledore” who said “It is our choices that show what we truly are, far more than our abilities”, she mentioned how her Rotaract related decisions were some of the best life decisions she had taken. Further, it was elucidated that their theme for the year “To avail and thrive” revolved around leveraging membership and manifesting innovation purpose and sustainability. In conclusion she gladly introduced her Board of Directors for the year 2019/20.

District Rotaract Representative Rtr. PP Krishan Balaji, in his speech, interestingly responded to Rtr. Sathma’s “Harry Potter” reference by quoting “Ginny Weasley” who once said, “Anything is possible if you’ve got enough nerve”.

His thoughts and wishes were followed by District Rotaract Committee Chairperson Rtn. Pirrasanth Jegatheesan’s insightful address to the gathering. He briefly revealed the story of Travel Video Blogger -Nuseir Yassin well known as Nas-Daily who decided to give up on his annual salary of $100,000 and start doing travel blog videos simply because he wanted to be “doing great” in life and not just be “doing good”! He further recalled the humble beginnings of the club lead by Mr. Shehan Adikari and how for example, the club’s then PR Director Ms. Bernadine Jayasinghe has now become one of the most sought after individuals in the Rotary Movement. His final words were the words of Robert Collier- “Success is a sum of small efforts repeated day in and day out”.

Then, the Chief Guest Rtn. Irshad Halaldeen started off by questioning the importance of the date “21st July” to Sri Lankans. The answer to it was quite amusing. Back in 1960, on the 21st July, Mrs. Sirimavo Bandaranaike was sworn in as the world’s first female Prime Minister. He went on to state that if we wanted to be effective leaders then we would have be to be smart at , firstly identifying the right rallying cry, secondly breaking them in to actionable verbs as to how to do it and thirdly creating a culture of trust and camaraderie. A few of his words of advice were - “Be brave. Openly admit. Allow margins for mistakes”. In conclusion he stated that the experience gained by Rotaract eventually made us the ultimate beneficiary especially by being a treasure in the corporate world.

Finally, the Tokens of Appreciation were distributed to the distinguished guests for the evening and thereafter the floor was opened for felicitations where Rotaractors of all the clubs who participated that day congratulated the Outgoing Board on a tremendous job done and added well wishes to the Incoming Board for the upcoming year.

This memorable evening came to an end with the Vote of Thanks delivered by the Secretary for the year 2019/20 Rtr. Thisura Ramanayake. The Rotaract Club of University of Colombo, Faculty of Management and Finance (RACUOCFMF) would like to extend its warm wishes to Rtr. Sathma Jayasinghe and her Board of Directors for yet another “Outstanding” year ahead. As part of one family, it’s a great pleasure to see you all “Avail and Thrive” indeed!