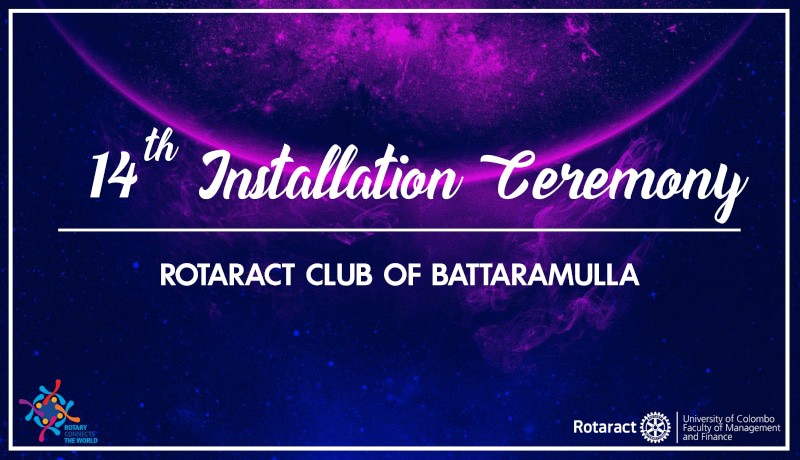 17 Aug 14th Installation Ceremony of the Rotaract Club of Battaramulla

Posted at 01:42h in Installations, Others, Uncategorized by rcuocfmfadmin 0 Comments

The 14th Installation Ceremony was held on the 8th of August 2019 at the Royal College Union Skills Centre Auditorium. Rtr.Shehani Leo, Rtr.Piyumi Abeywardhana, Rtr. Dewmini Liyanage and Rtr. Sandalu Weerasekara attended the ceremony on behalf of our club - RACUOCFMF.

The Ceremony began with the arrival of the dignitaries including the Chief Guest for the evening, CEO of Cybertec - Rtn. PP.Channa Marambe. Distinguished guests who were invited for the lighting of the traditional oil lamp took their respective seats at the head table afterwards. After the National Anthem, the house was called to order by the Sergeant-at-Arms, followed by the Flag Salutation, Rotaract Invocation, Four- Way Test and the Rotaract Song.

After the warm welcome, Rtr. Himashi Marasinghe delivered the Secretary’s Report for the year 2018/19 which was followed by a video clip that outlined the projects done in the past year. It revealed the success of their journey so far. Then the gathering was addressed by the Outgoing President Rtr. Oshadha Pandithage where he shared about his experiences and wished the Incoming President and his Board for a successful year ahead.

After the introduction to the President for the year 2019/20, the Outgoing President Rtr. Oshadha Pandithage gracefully collared the Incoming President Rtr. Chamath Jayasinghe which was the most anticipated and significant moment of the event.

Then the stage was opened to the newly appointed President Rtr.  Chamath Jayasinghe to address the gathering after which he introduced his Board of Directors for the year 2019/20.

The Outgoing President and the Board was appreciated and warm wishes were extended to the Incoming President and Board by the District Rotaract Representative Rtr. PP. Krishan Balaji when he addressed the gathering.

Next, the CEO of Cybertech, Rtn. PP. Channa Marambe, delivered an interesting speech by sharing his life experiences and gladly wishing the Outgoing President and Board as well as the Incoming President and the Board.

Rtr. Chamath Jayasinghe distributed Tokens of Appreciation to the distinguished guests for the evening and then the stage was opened for the felicitations where Rotaractors of all the other clubs congratulated the Outgoing Board for an amazing job done and wished for a successful year for the Incoming Board. With the end of felicitations Rtr. Waruna Karunanayake, Secretary for the year 2019/20 delivered the Vote of Thanks. With the termination of the Installation everyone gathered for fellowship and refreshments.

Once again, the Rotaract Club of University of Colombo faculty of Management and Finance (RACUOCFMF) would like to Congratulate Rtr. Chamath Jayasinghe and his board on their appointment and wishes for a successful year ahead.