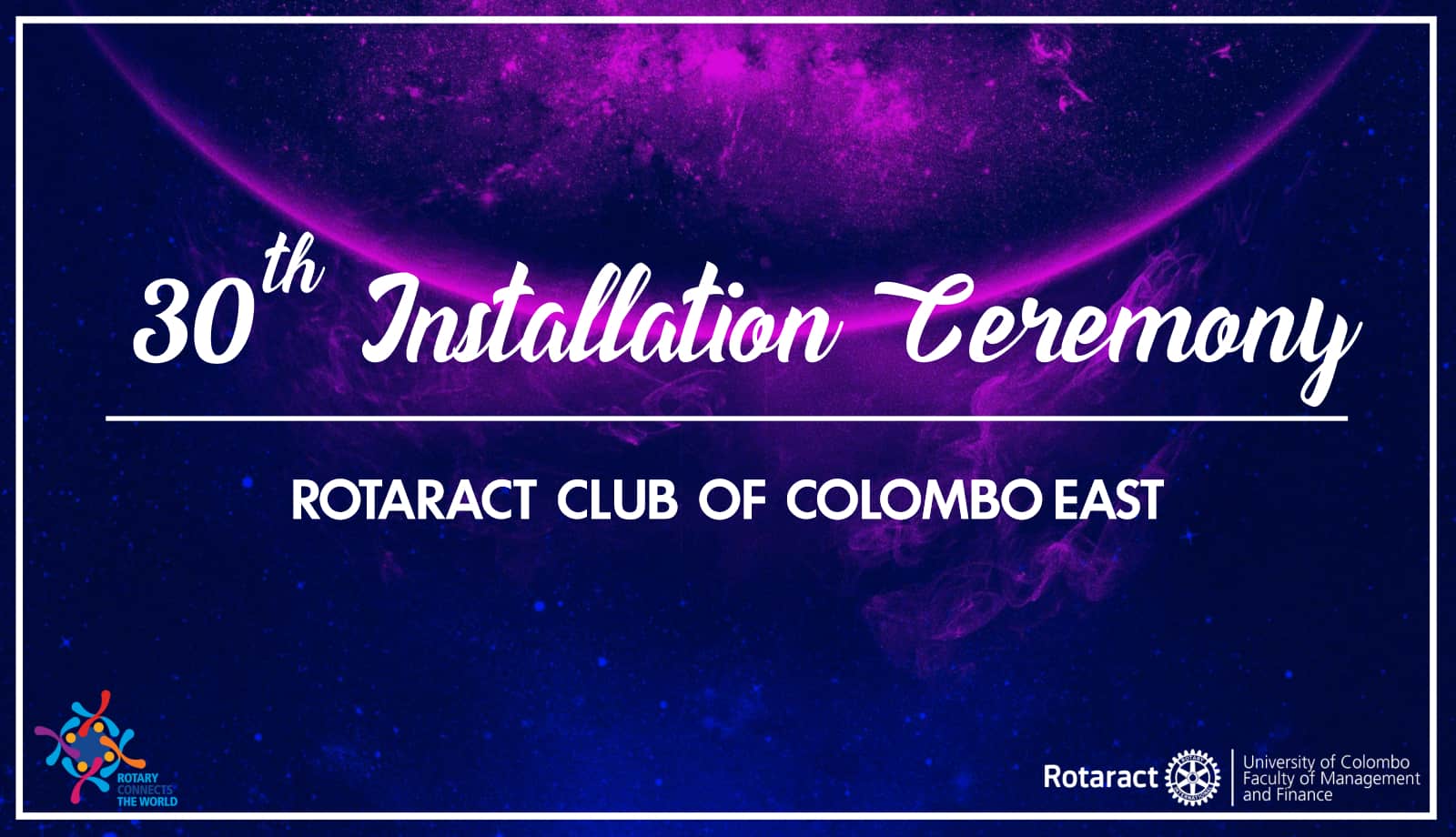 Posted at 01:19h in Installations, Others, Uncategorized by rcuocfmfadmin 0 Comments 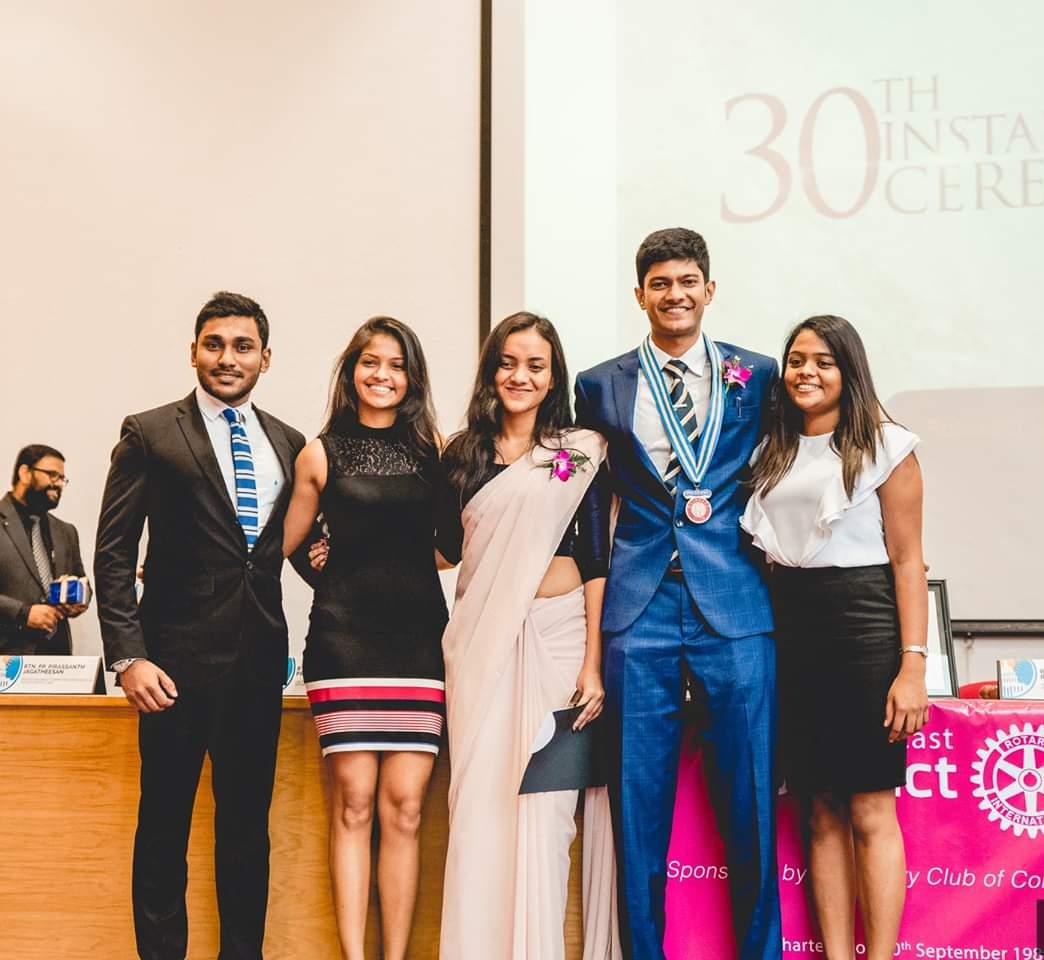 To commence the ceremony, the dignitaries of the evening were invited to the lighting of the traditional oil lamp. The dignitaries who took their respective seats at the head table were the District Committee Chairperson Rtn. PP. Pirrsanth Jegatheesan, Youth Services Chairperson Rtn. Muditha Premathilaka, Guest of Honour Mr. Lahiru Wijerathna, Chief Guest, President for the years 2019/20 Rotary Club of Colombo East Rtn. Raadha Raadhakrishnan and District Rotaract Representative Rtr. PP. Krishan Balaji. Then the Sergeant-at-Arms called the house to order which was followed by the National Anthem, Rotaract Invocation, Flag Salutation, Four Way Test and the Rotaract Song.

Next the Welcome Address was delivered by the Chairperson of the Installation Rtr. Reshan Rajapaksha. The Secretary’s Report for the year 2018/19 was delivered by the Past Secretary Rtr. Fabian Schokman. Drawing upon his experience as the Secretary for two years of the Rotaract club of Colombo East, he elaborated on how he had to work according to various agendas with different Presidents. He stated that, to him Colombo East is like the land of the rising sun and went on to highlight a few major projects in his report such as the Alan Walker Music Festival. Further, he thanked all clubs in the Colombo East family. Afterwards, the Outgoing President Rtr. Dillon Henderlin addressed the gathering and emphasized on how we can and how we should rise up as individuals, as Rotaract Clubs and as a Nation after the Easter Attack in April.  Finally, he extended his sincere gratitude to all individuals both inside and outside the club who had supported him during his journey of presidency.

The next event on the agenda for the day was the introduction of the President for the year 2019/20, Rtr. Kasun Ranathunga. He was introduced by Rtr. Theshan and Rtr. Shenal. Then Rtr. Kasun was gracefully collared by the Outgoing President Rtr. IPP Rtr. Dillon Henerlin.  As the newly appointed President Rtr. Kasun Ranathunga thanked all the supporters who guided him to reach this achievement in his Rotaract journey. In his speech, he highly focused on the Community Service project carried out by them at Debarawawa Kanishta Vidyalaya where they had taken the initiative to rebuild a library, computer lab, canteen and a staff room. He humbly requested the audience to make this project a success by quoting a line from the Rotaract song, ‘To serve our fellow men, like no other’. At the end of his speech, he introduced his Board of Directors for the year 2019/20.

Afterwards, District Rotaract Representative Rtr. PP Krishan Balaji addressed the gathering and appreciated the project which was conducted at Debarawawa Kanishta Vidyalaya by Rotaract Club of Colombo East. He was given a Token of Appreciation by the newly appointed President Rtr. Kasun Ranathunga. Next, District Rotaract Committee Chairperson Rtn. PP. Pirrsanth Jegatheesan addressed the gathering and compared the journey of Rotaract to a 400m relay and mentioned that the "Installation day is like a baton changing from Rtr. Dillon to Rtr. Kasun".

The audience was entertained by two talented club members with a medley of songs. Next, Guest of Honour Mr. Lahiru Wijerathna and Chief Guest Rtn. PHF Raadha Raadhakrishnan addressed the gathering as well. Rtr. Kasun Ranathunga offered Tokens of Appreciation to the rest of the dignitaries and IPP. Rtr. Dillon distributed the remaining Tokens of Appreciation to some of the significant contributors.

This memorable evening came to an end with the stage being opened for felicitation. The Rotaract Club of University of Colombo, Faculty of Management and Finance (RACUOCFMF) would like to extend its warm wishes to Rtr. Kasun Ranathunga and his Board for their upcoming journey they just embarked upon!