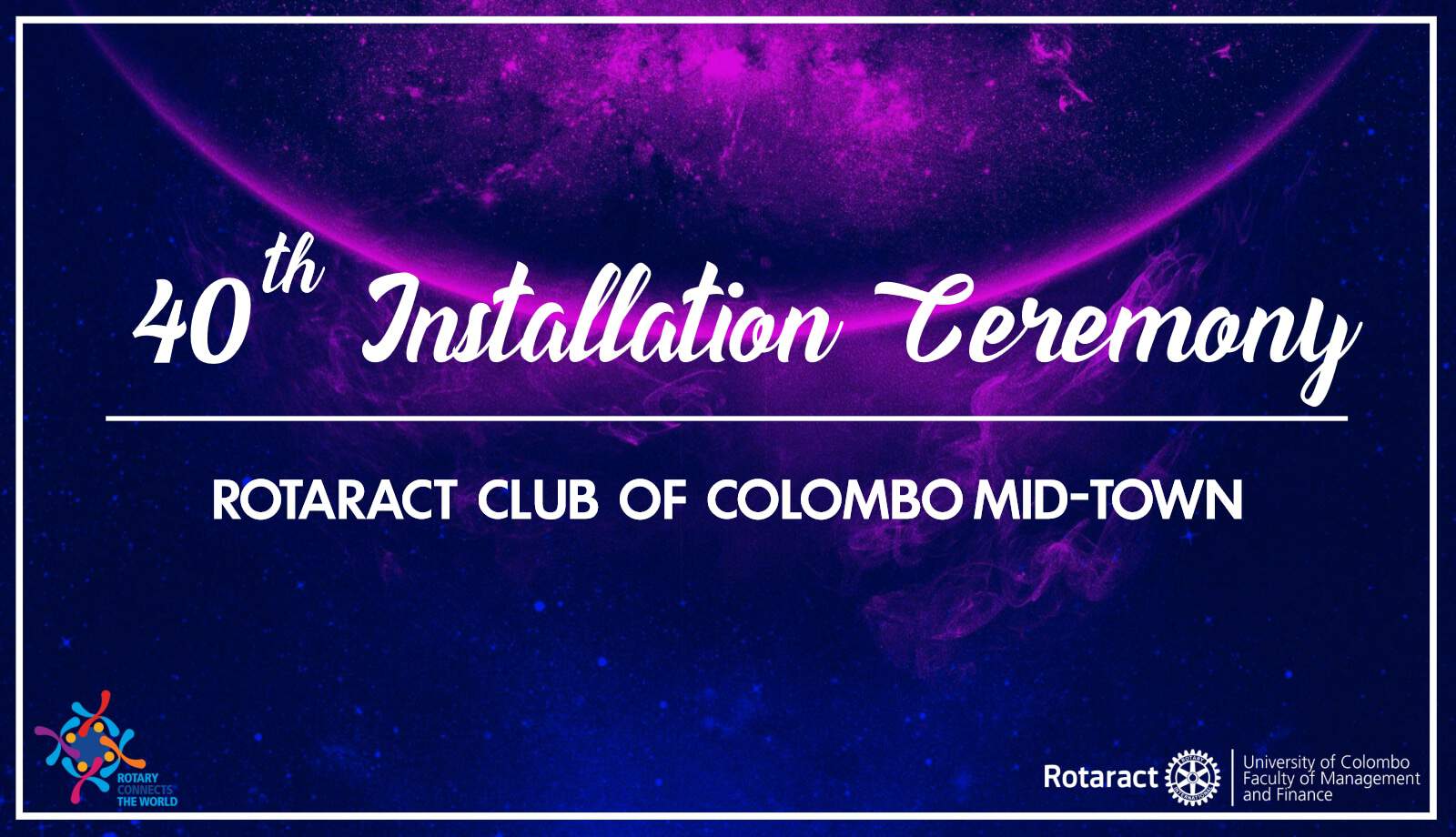 Posted at 01:13h in Installations, Others, Uncategorized by rcuocfmfadmin 0 Comments

Rotaract Club of Colombo Mid Town concluded their 40th Installation Ceremony on a high note on the 25th of July 2019 at DHPL Auditorium Colombo. Rtr. Shehani Leo, Rtr. Piyumi Abeywardhana and Rtr. Ovin Bimsara from RACUOCFMF were present to rejoice this new leadership.

To proceed with this grand evening, the Chief Guest and rest of the dignitaries were invited to plant 20 trees instead of lighting the traditional oil lamp since the Rotaract Club of Colombo Mid Town aligns all their activity with the Go - Green concept. With this theme, plant-seeds were given away to all the guests with  a Thankyou-note. Before proceeding with the event, a minute of silence was observed in remembrance of Rtr. Christopher from the Rotaract club of Wellawatte and the lives lost owing to the April Easter Attack. The Sergeant at Arms called the house to order followed by the National Anthem, Rotaract Invocation, Flag Salutation, Four Way Test and the Rotaract Song.

The Chairperson of the Installation - Rtr. Hamza Huzair warmly welcomed the gathering and afterwards the Outgoing Secretary Rtr. Dina Ali presented the Secretary’s Report for the year of 2018/19. She elaborated the main projects which were organized during the year of 2018/19. The Immediate Past President Rtr. Insaf Ismail addressed the gathering and he highlighted how they served the society with passion and how they were able to organize 41 projects during the year with a team of superheroes. At the end, he thanked everyone who supported them and expressed how proud they are as one of the oldest Rotaract Clubs in Sri Lanka.  This was followed by the distribution of Tokens of Appreciation for some of the significant contributors. "Mid-Towner of the Year" award was awarded to Rtr. Insaf Hussain.

The most remarkable moment of the event was the relaunch of the Website of the Rotaract Club of Colombo Mid-Town with the latest features of Mid-Town Value Chain and a database to expand the networking capacity of the movement as a whole. Stating that member development is one aspect that they'd highly focus on in the upcoming year, the newly appointed President inducted 13 new members to the club.

Next, the Outgoing President and his Board were appreciated and the Incoming Board was advised on how to move forward while making a better difference in future by the dignitaries for the evening namely District Rotaract Representative Rtr. PP. Krishan Balaji, District Rotaract Committee Chairperson Rtn. PP. Pirrsanth Jegatheesan and the Chief Guest President PHF. Rtn. Irshad Halaldeen. The newly appointed Secretary of Rotaract Club of Colombo Mid Town Rtr. Nadeera Udawatta concluded the Installation Ceremony after delivering the Vote of Thanks.

This memorable evening came to an end after the stage was open for felicitations in a novel way where the felicitations were broadcasted live on the official Rotaract Club of Colombo Mid Town Instagram page. As part of one family, The Rotaract Club of University of Colombo, Faculty of Management and Finance (RACUOCFMF) takes great pleasure in extending warm wishes to Rtr. Nipun Alwis and his Board for their upcoming journey they just embarked upon!