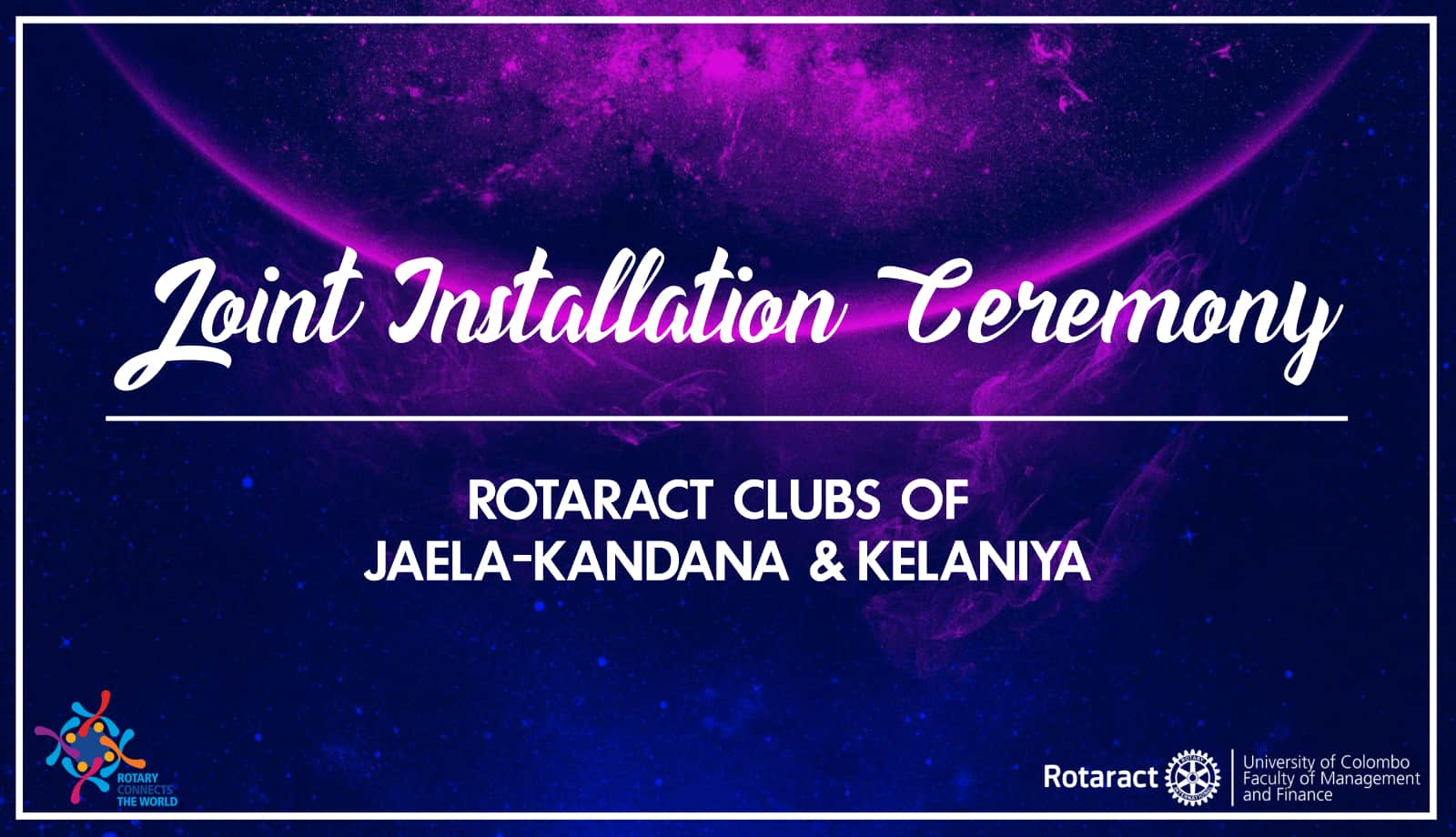 Posted at 01:38h in Installations, Others, Uncategorized by rcuocfmfadmin 0 Comments 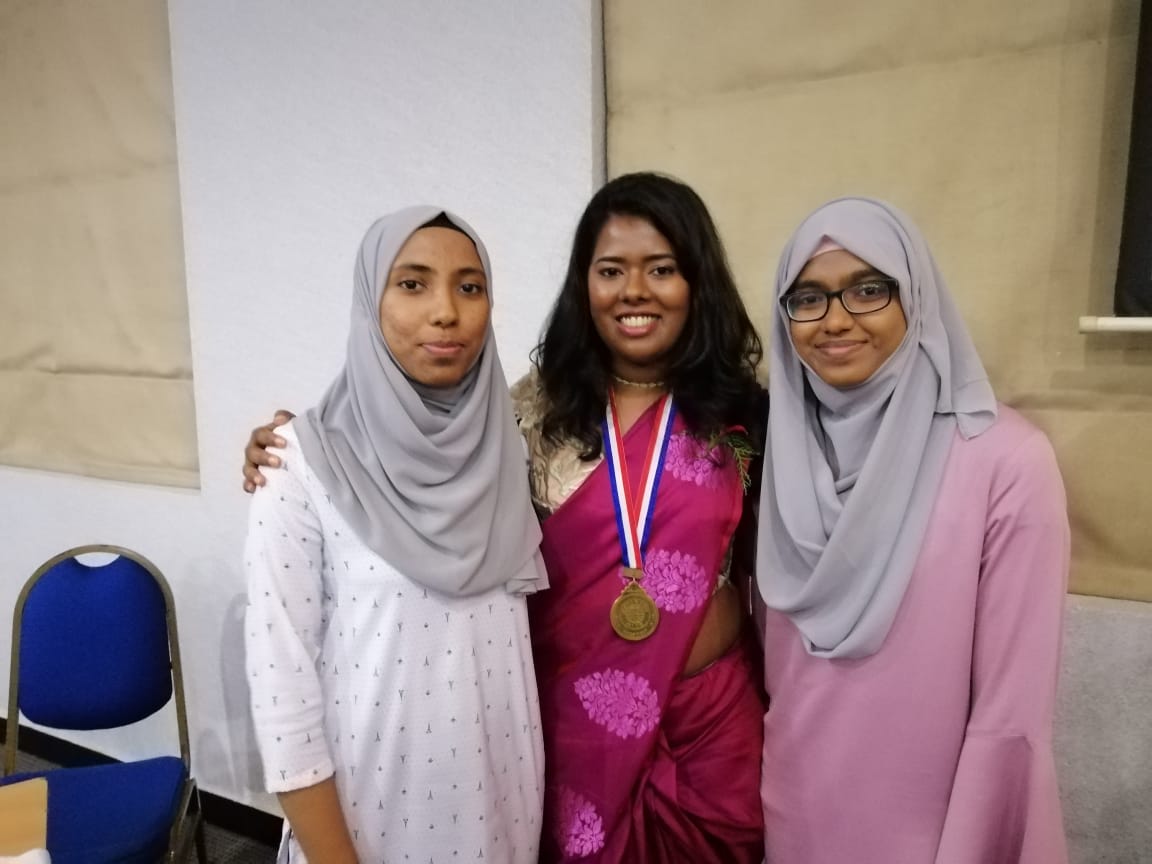 Then the house was called to order by the Sergeant at Arms. This was followed by the National Anthem, Flag Salutation, Four - way Test and Rotaract Song.

First was the Installation Ceremony of Ja-Ela Kandana followed by the Welcome Speech delivered by Co-Chair persons Rtr. Thamindu Rajapaksha and Rtr. Dexter Peiris. It was followed by the Ja-Ela Kandana Secretary's Report for the year 2018/19 delivered by Rtr. Nicola Galahitiyawa in which she highlighted some projects out of the 18 successfully and concluded projects. Afterwards a short video reflecting their cherished moments of the past year, was played.

Then the gathering was addressed by the Outgoing President of the Rotaract Club of Ja-Ela Kandana - Rtr. Gihan De Alwis in which he thanked the Outgoing Board, all the club members and others who helped him during last year to make things happen successfully.

Next the Outgoing President Rtr. Gihan De Alwis gracefully collared the Incoming President of the Rotaract Club of Ja-Ela Kandana Rtr. Nicola Galahtiyawa which was followed by her speech in which she stated that there is great work to be done as a community by the Rotaractors as they move on to the 4th year of the club.

Following her speech a video was played to introduce the Incoming Board.

Afterwards there was a musical performance by Rtr. Sahan and Rtr. Tharindu.
Then it was the turn of the Rotaract Club of Kelaniya to conduct their 13th Installation Ceremony.

To begin with, the Secretary's Report for the 2018/19 year was delivered by Rtr. Hashali Perera in which she highlighted certain projects out of the 20 completed ones, such as their signature projects, which was a community service project targeting breast cancer, a project targeting digital communication under the avenue of Professional Development etc. Further she expressed her gratitude towards everyone who supported to achieve all the projects successfully. Then, this was followed by a short video which was a glimpse of what they did in the past year and another one dedicated to the Outgoing President Rtr. Shehana Dain

Then it was the time for the Outgoing President of Rotaract Club of Kelaniya Rtr. Shehana Dain to address the gathering in which she emphasized on how Rotaract Club can change people in good way and she congratulated the incoming president for greater heights in future. Also she thanked all her Board Members for being there until the end. Afterwards came the most colorful part of the event in which the Incoming President Rtr. Ranga Samarakoon was collared gracefully by the Outgoing President Rtr. Shehana Dain.  Rtr. Ranga humbly thanked everyone who made him take this responsibility as the President. He further stated that they have the most talented and thoughtful members who will strive and work hard to make all the upcoming projects successful.

Following the induction of  the Board of Directors, it was the turn for the District Rotaract  Representative - Rtr. PP. Kishan Balaji to address the gathering in which he complimented the clubs for conducting the first Joint Installation Ceremony which will ultimately builds stronger relationships and redefines the friendship into a family. He further emphasized on making the best use of time and becoming the best version of yourself every day. Next, the District Rotaract Committee Chairperson -  Rtn. Sohan Perera shared few words in addition to his felicitation on helping the under privileged people to come up in life.

Afterwards the gathering was addressed by Chief Guests for the evening; Chief Guest - Rotaract Club of Ja Ela-Kandana Rtn. Somindra Gunawardhana and Chief Guest - President of Rotary Club of Kelaniya 2019/20 Rtn. Sakuna Jayasuriya. Tokens of Appreciation were presented by the Outgoing and Incoming presidents to dignitaries, guests and all those who encouraged them throughout.

After a beautiful entertainment item the event concluded with the Vote of Thanks delivered by the Incoming Secretaries Rtr. Shehani Weerasinghe of Rotaract Club of Ja-Ela Kandana and Rtr. Isuri Galhena of Rotaract Club of Kelaniya and then all gathered for fellowship and refreshments.

The Rotaract Club of University of Colombo, Faculty of Management and Finance (RACUOCFMF) would like to extend warm wishes to Rtr. Nicola Galahitiyawa and Rtr. Ranga Samarakoon and their Boards of Directors for an amazing and successful year ahead. 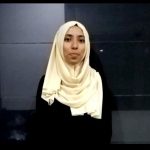