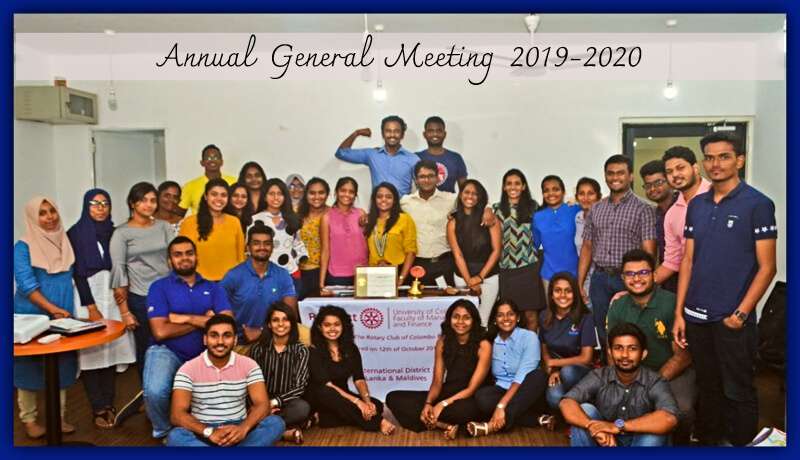 On the 22nd of July 2019, the Rotaract Club of University of Colombo, Faculty of Management and Finance, bid farewell to one era, and said Hello to another. The Annual General Meeting of RACUOCFMF was held, in which Immediate Past President Rtr. Limashi Kosgodage formally handed over her responsibilities to President Elect for the year 2019/20, Rtr. Shehani Leo.

All club members witness the transition, including the Outgoing and Incoming Boards of Directors. It all began with Rtr. Ramith Kalana calling the house to order, followed by the National Anthem, Rotaract flag salutation, Rotaract Invocation, Four Way Test and the Rotaract Song.

Next, Immediate Past President Rtr. Limashi Kosgodage addressed the gathering. She started off by thanking everyone for being present and allocating their time towards this. She acknowledged the presence and guidance of past President and Secretary Rtr. Akhila and Rtr. Manahari. Rtr. Limashi then gave a small brief of what was done throughout the year and extended her special gratitude to outgoing secretary Rtr. Amandi Umagiliya for all the support. She extended her gratitude to all her Vice Presidents, Board Members and Project Chairmen individually, recognizing what they’ve done towards making the year 2018/19 a memorable one.

Then, Outgoing Secretary Rtr. Amandi Umagiliya briefly addressed the gathering in which she shared her experience of being the secretary and thanked all who supported throughout the year. This was followed by Rtr. Limashi giving away special recognitions and awards for the outstanding contributions of members. These included Rotaractor of the Month, Rotaractor of the Quarter and Special recognition for awards received at the Annual Rotaract District Assembly.

It was then a bittersweet moment for Rtr. Limashi as she officially collared Rtr. Shehani Leo as the President of RACUOCFMF for the Rotaract year 2019/20, and handed over her responsibilities to the new president.

The Annual General Meeting of 2019 was adjourned formally by Rtr. Shehani Leo. However, this was followed by an informal session of well-wishes, celebrations and a photo-shoot. A cake was cut to mark the moment of the end of an era and the beginning of a new. The atmosphere continued to be exciting as all club members engaged in conversations, catching up and a heaps of stories and laughter!, showcasing the fellowship and the right spirit the club has, as we step into a new Rotaract year!