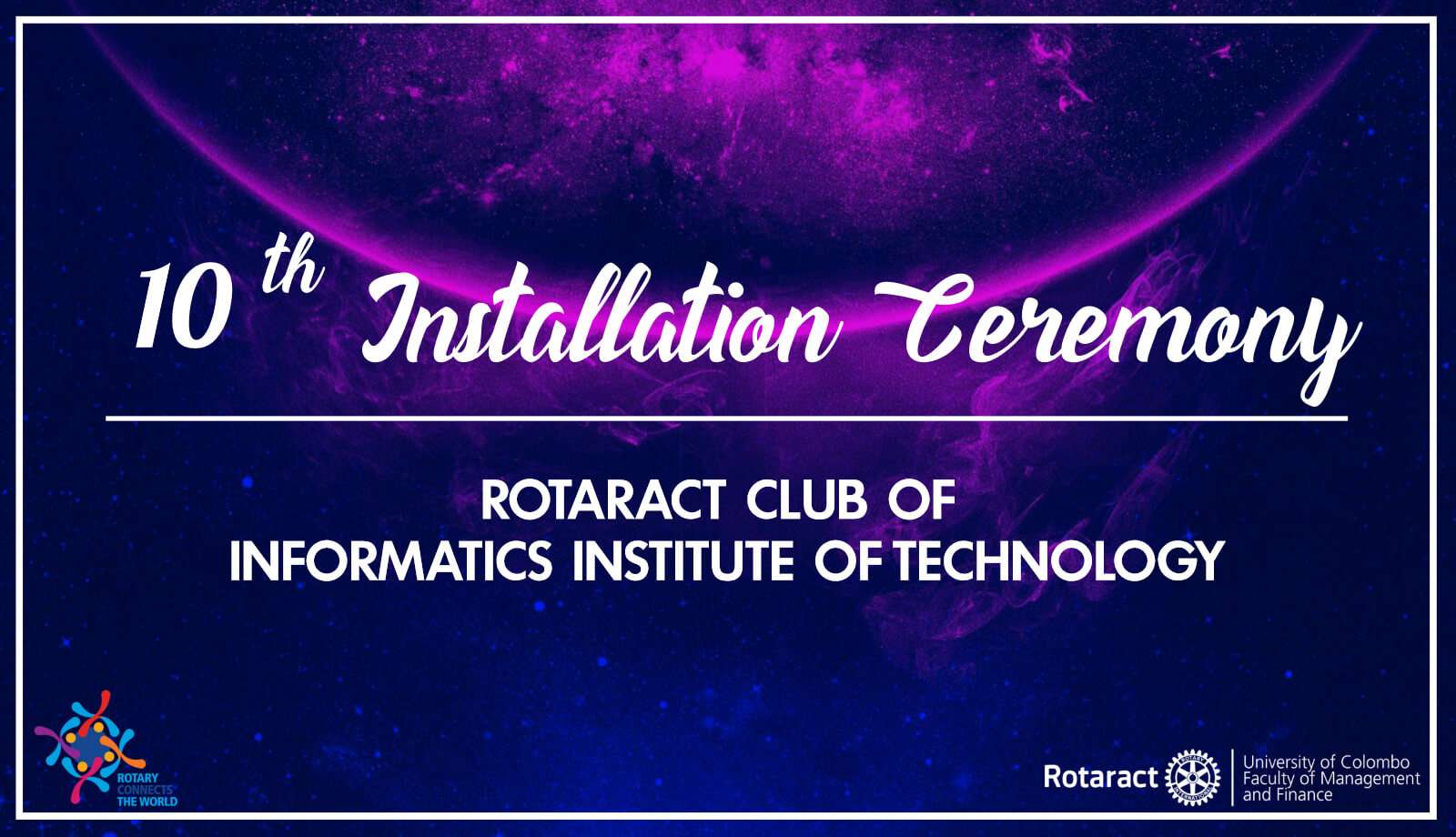 Posted at 00:43h in Installations, Others, Uncategorized by rcuocfmfadmin 0 Comments

The 10th Installation Ceremony of the Rotaract Club of the Informatics Institute of Technology, was held on the 19th of July 2019, and was quite eventful and exciting as all members were working hard for which is considered the most awaited event in the Rotaract calendar. Rtr. Piyumi Abeywardhana, Rtr. Achini Dayarathne and Rtr. Yasindu Mendis attended the ceremony representing RACUOCFMF.

The ceremony commenced with the arrival of the Dignitaries of the event, District Rotaract Committee Chairperson- Rtn. PP. Pirrsanth Jegatheesan, District Rotaract Representative Rtr. PP. Krishan Balaji followed by the Chief Guest President of the Rotary Club of Nugegoda, Rtn. Danya Udukumbure and the Guest of Honour - Director of Informatics Group of Companies - Mrs. Kishani Perera. This was followed by the lighting of the traditional oil lamp by the dignitaries after which they took their respective places at the head table. After the National Anthem the house was called to order by the Sergeant-at-Arms Rtr. Pubudu Kumarasinghe, followed by the Rotaract Invocation, Flag Salutation, Four-way test and the Rotaract Song.

After the warm welcome given by Rtr. Amesha Vithanage, Rtr. Dilara delivered the Secretary’s Report for the year 2018/2019. In her speech she mentioned that the club commenced its activities in June 2018 under the theme “Inspire through Experience” which helped them in managing great projects throughout the year with “The Hot dog Show Down” and “E Muthudama “ being awarded the "The Most Outstanding Public Relations Award-Silver" and  "Rotaract South Asia Outstanding Award – Gold" respectively at the Ditrict Rotaract Assembly for the year. Next was the Outgoing President, Rtr. Vimukthi’s speech. He mentioned that he was focused on changing the perception of the public on the Rotaract movement under the theme “Service through Fellowship” which was proved by the brilliance in some projects carried out in the previous year. He then presented the Outgoing Board with a Token of Appreciation for their hard work, dedication and sacrifices made in working towards taking the club to greater heights, which was followed by the District Rotaract Committee Chairman - Rtr. Pirrshanth Jegatheesan addressing the gathering.

Next was the most anticipated moment of the ceremony, where the President of RACIIT for the year 2019/2020, Rtr. Pasan Ganewatte was gracefully collared after being introduced by Rtr. Gevin Batuwangala. He then proceeded with his speech introducing the vision for the new Rotaract year under the theme “Humanity beyond Infinity”. Concluding his speech by promising to give his maximum to the betterment of the club and towards achieving the club goals, he introduced the Board of Directors for the year 2019/2020.

The Executive Committee and the Board of Directors for the year 2019/20 are as follows;

Next, the District Rotaract Representative Rtr. PP. Krishan  Balaji addressed the gathering where he expressed that his experience with RACIIT has always been fun and exciting and that he believed that with all the fun and excitement they always had to offer, they’ve initiated great projects through it. Concluding his speech he congratulated the Outgoing Board and wished the newly appointed board for a successful year by beautiful saying, “We are more powerful than we believe ourselves to be”. The final speech was delivered by the Chief Guest of the evening, President of the Rotary Club of Nugegoda Rtn. Danya Udukumbure.

After a mesmerizing entertainment item, Tokens of Appreciation were presented to the Outgoing Executive Committee and the distinguished guests. The stage was then opened for felicitations. The ceremony was concluded with the Vote of Thanks delivered by Rtr. Harkim Thameem and everyone gathered for fellowship and refreshments.

The Rotaract Club of University of Colombo, Faculty of Management and Finance (RACUOCFMF) would like to extend warm wishes to Rtr. Pasan Ganewatte and his Board for a fruitful year ahead.