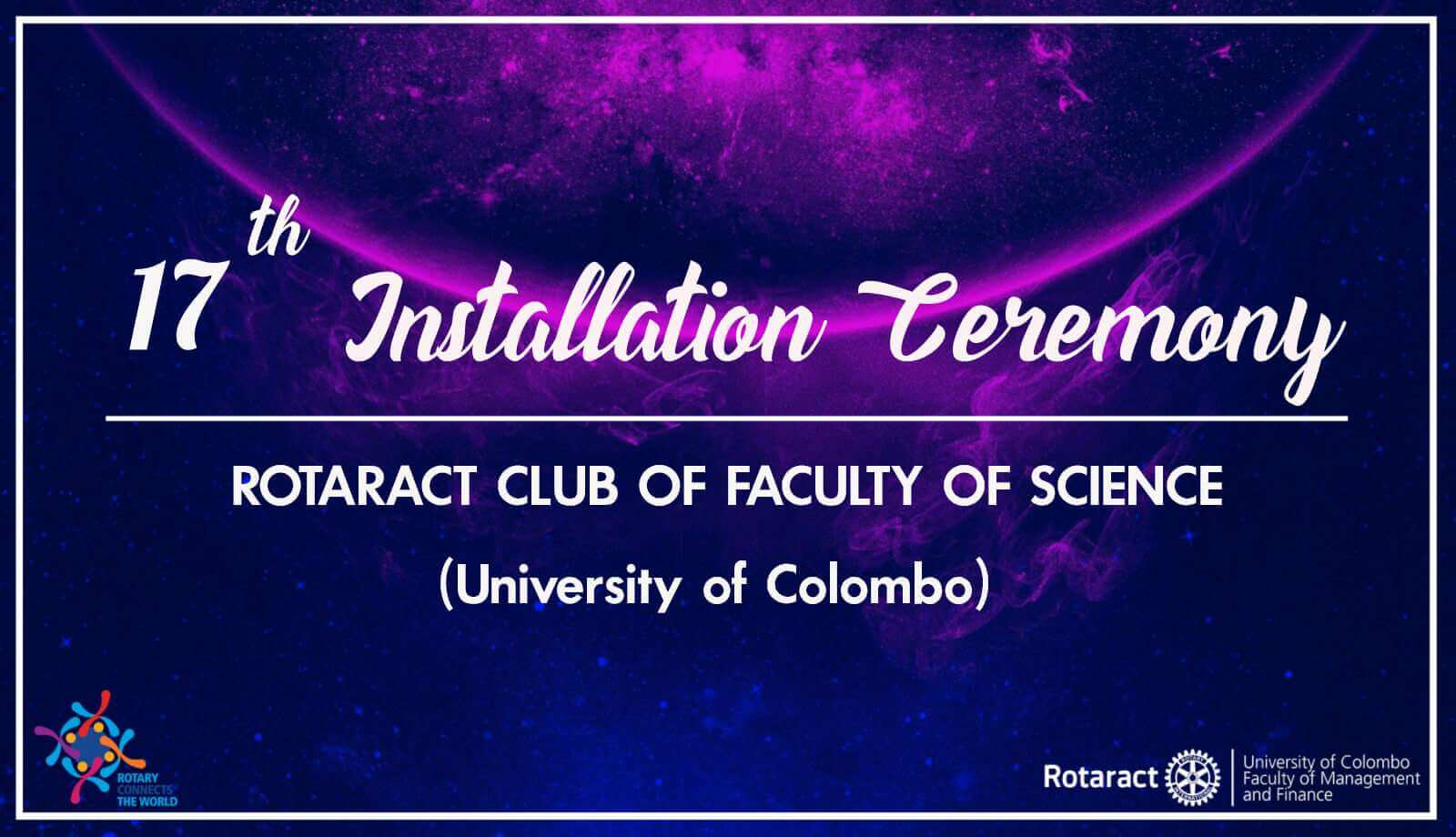 26 Oct 17th Installation Ceremony of the Rotaract Club of Faculty of Science, University of Colombo

Posted at 10:43h in Installations, Others by rcuocfmfadmin 0 Comments

The 17th Installation Ceremony of the Rotaract Club of the Faculty of Science University of Colombo was held on the 28th of August 2019 at the DHPL Auditorium, Colombo 02. Rtr. Shehani Leo, Rtr. Piyumi Abeywardhana, Rtr. Vishmi Withanage and Rtr. Dilsha Perera from RACUOCFMF were present to rejoice this new leadership. The ceremony officially commenced with an introduction by the compere and the lighting of the oil lamp after which the Sergeant- at -Arms called the house to order. This was followed by the National Anthem and the conventional formalities. 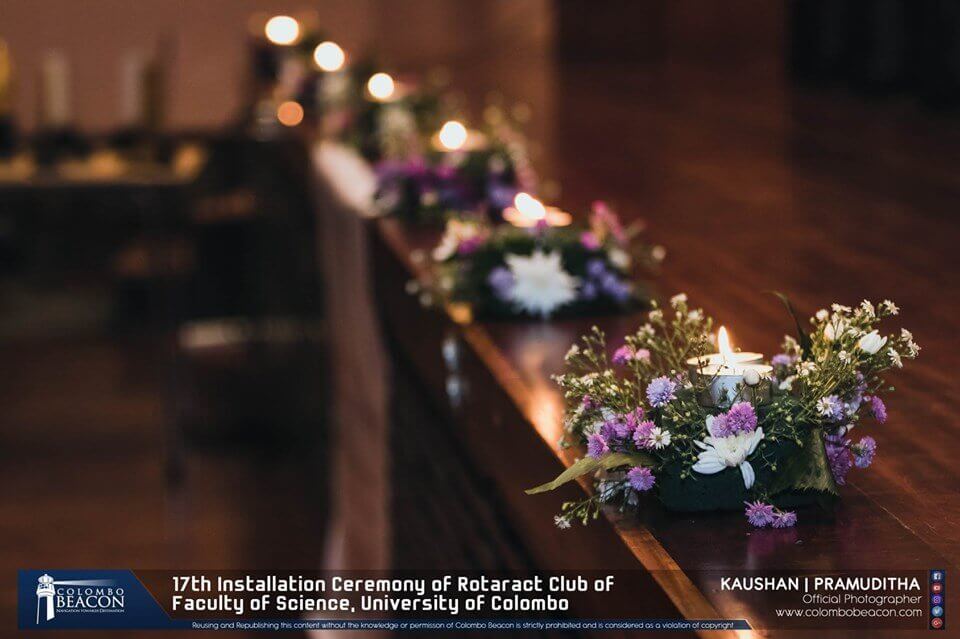 Afterwards the Secretary’s Report for the year 2018/19 was delivered by the Past Secretary Rtr. Nadeeshani Ekanayake who was recognized as one of the “Most Outstanding” Secretaries at the 29th Rotaract District Assembly Awards. The club had successfully executed 25 projects across all avenues throughout the Rotaract year making them win several District Assembly Awards including “The Most Outstanding Club” and “The Most Outstanding President” awards. Projects “Danindri”, “Akankara” and “Yoga O’clock” were highlighted as signature projects. 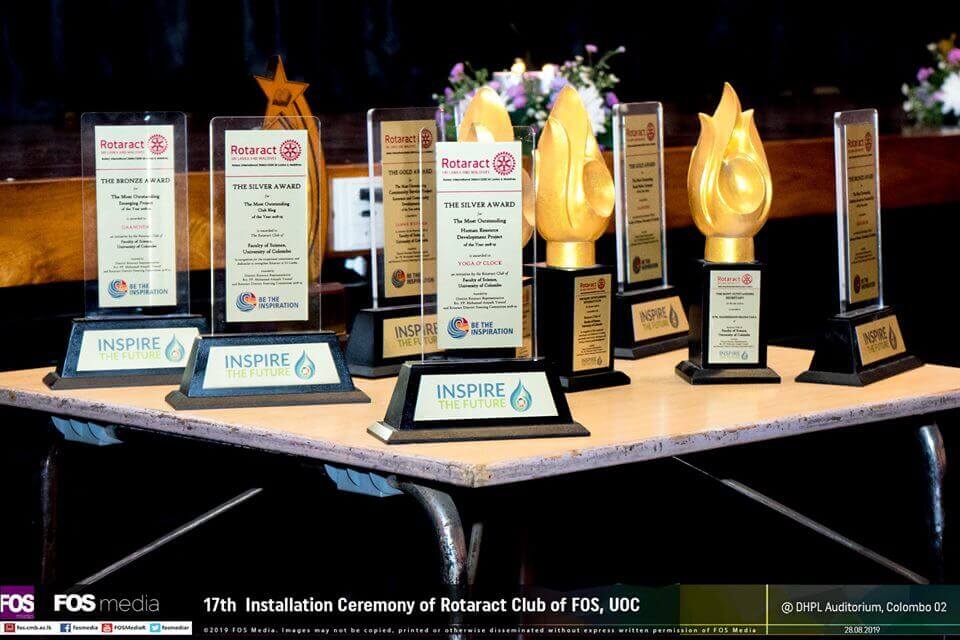 Next was the address by the Outgoing President Rtr. Thanuja Jayawardena who was also recognized as one of the “Most Outstanding” Presidents at the 29th Rotaract District Assembly Awards. He quoted C. S. Lewis, a British Writer by saying, “Hardships often prepare ordinary people for an extraordinary destiny.” The invaluable contribution and the unforgettable memories made throughout the club’s journey were remembered by him with happiness, a sense of pride and gratefulness.

Then, the Tokens of Appreciation and certificates were distributed to the Outgoing Board of Directors by the Outgoing President, Rtr. Thanuja Jayawardena.

This was followed by Randima Fernando affectionately introducing his best friend as the Incoming President for the year 2019/20 - Rtr. Mindula Perera. After the Induction of Rtr. Mindula, he addressed the gathering where he mentioned that he always wanted to do good and help others. He also mentioned that he never looked back on the decision of joining Rotaract. In conclusion he gladly introduced his board of Directors for the year 2019/20.

District Rotaract Representative Rtr. PP Krishan Balaji, in his speech, interestingly responded to a video shown after the Secretary’s Report and said that what he liked the most were the smiles he saw in each of those pictures. He also wished the club to achieve more in the coming year. His thoughts and wishes were followed by District Rotaract Committee Chairperson Rtn. PP Pirassanth Jegatheesan’s address to the gathering.

Then a beautiful entertainment item was performed by the club members and it was followed by the introduction to the Chief Guest - Rtn. PHF President Samitha Seneviratne. He stated that the experience we get by being a part of the Rotaract Club would eventually make us shine in the corporate world.

Finally the Tokens of Appreciation were distributed to the guests of the evening and thereafter all Rotaractors who represented different clubs congratulated the Outgoing Board for successfully completing the year and wished the Incoming Board for yet an even more successful year ahead. 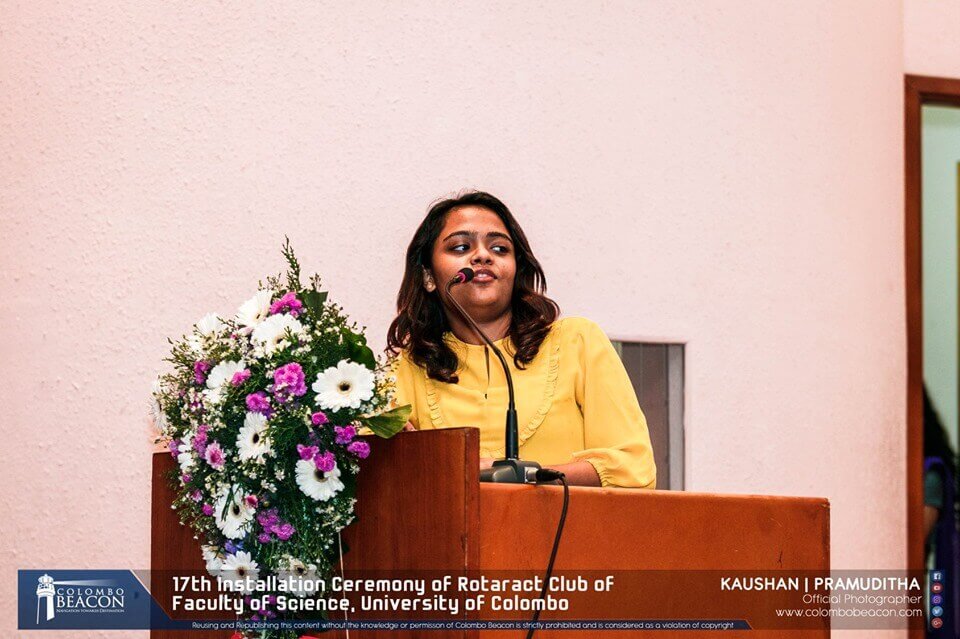 The vote of thanks was delivered by the Secretary for the year 2019/20 Rtr. Sachindee Chandula. The Rotaract Club of Faculty of Management and Finance (RACUOCFMF) would like to extend its wishes to Rtr. Mindula Perera and his Board of Directors for the upcoming year which we sincerely hope would be “Outstanding” just like the previous year!