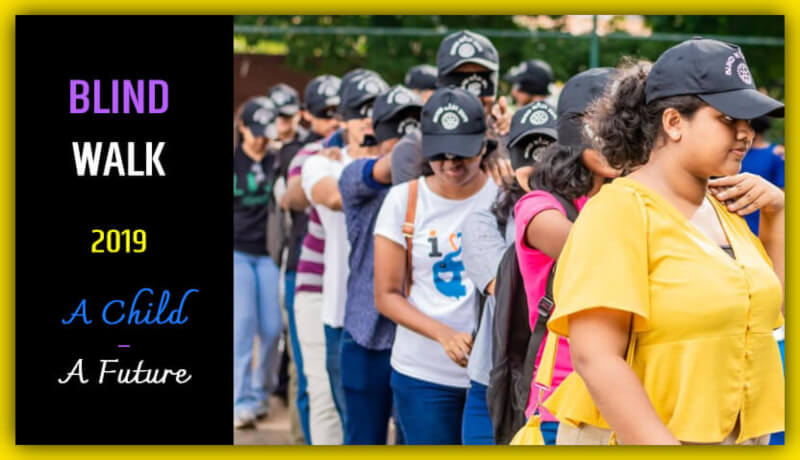 “With every step kept forward, our hearts moved a step farther.” – This undoubtedly was one of the many silent thoughts that were felt by all those who took part in the Colombo Blind Walk 2019 which happened on the 12th of October from 2.30 p.m onwards.

Nearly, 200 + enthusiastic and excited individuals thronged the registrations desk at the Royal College Union Skills Centre where each participant was given a blind fold and a cap, priced at nothing but pure empathy - worth more than any currency. 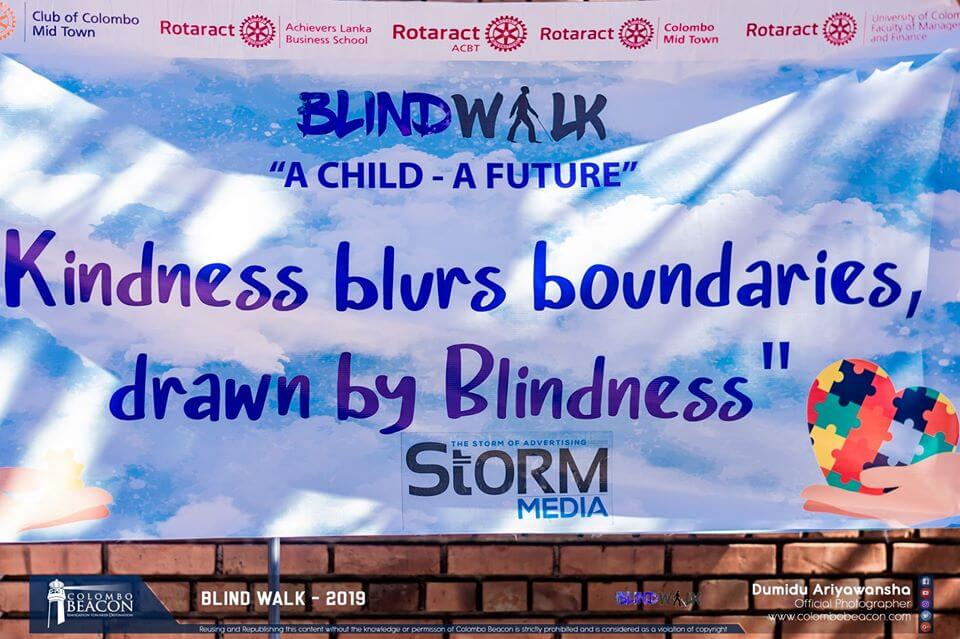 In the meantime, a bunch of these individuals also made it an opportunity to come forward and pledge their eyes with the sincere hope of breathing in more colours to the lives of those who see only one colour, by deciding to make their eyes live twice. It wouldn’t be wrong for one of them to believe that their pledge turned them in to superheroes whose names shall be remembered forever as they decided to pass it on and leave behind a legacy.

This year’s theme for Blind Walk was, “A Child – A Future” which was justifiable indeed concerning its aims that were perfectly aligned with both the local and world contexts of the visually impaired community in general. The main aim was fundraising through tickets, sponsorships and donations, to provide spectacles for 500 school children in great need of it. Among the other objectives were increasing eye donation pledges in Sri Lanka,  promoting sponsorships for cataract surgeries and raising awareness about preventable blindness.

Here’s a bit about the unfortunate truth that made these aims more meaningful and worthwhile. According to the 2019 W.H.O World Report on Vision, released ahead of World Sight Day which fell on 10th October this year, “At least 2.2 billion people have vision impairment or blindness, of which over 1 billion cases could have been prevented or have yet to be addressed”. The report further reveals that the lack of access to a pair of spectacles is one of the reasons behind these circumstances. Meanwhile, based on local statistics it can be said that approximately 45% of school going children in Sri Lanka are in need of spectacles and yet cannot afford it.

On a mission to realising the future’s vision and to know what eternal darkness felt like, individuals from all walks of life embarked on this walk for a cause, guided by individuals representing the organizations behind this initiative – Namely the Rotary Club of Colombo Mid Town and the Rotaract Clubs of; Achievers Lanka Business School, Australian College of Business & Technology (ACBT), Colombo Mid Town and University of Colombo-Faculty of Management & Finance. 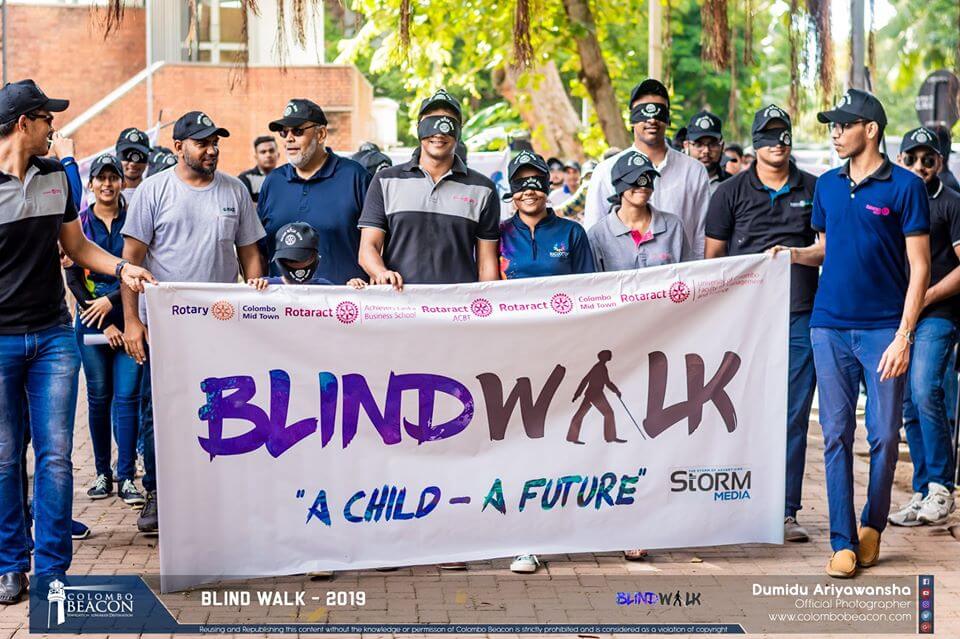 In broad day light, the majestic architecture of Royal College encircled by the endless beauty of tall grand trees suddenly drowned in pitch black darkness for those who wore their blindfolds. Divided in to small teams of 15 to 20, guided by a few, with their hands placed on the shoulders of the individual in front of them, the blindfolded participants trudged along the busy streets of Colombo 07. In short, it was a challenge and a silent reminder of how blessed and fortunate we were.

Image Courtesy: Colombo Beacon
The walk which was approximately 2 Km long was a mini adventure on its own.

These lines which were often heard throughout the walk as they were initially uttered by the guide to the first person right behind him or her bear testimony to this fact - “Right! Left. A bit more to your left. Be careful. A slight downward slope. A small upward slope. Walk straight. There’s a wall on to your right. That was a small branch that brushed against you – we are walking under a line of trees. Speed up a bit, we are crossing the road!”

From time to time, a few of them walked in a completely different direction, some slightly knocked themselves on vehicles parked on either sides and some nearly bumped in to lamp posts.

Almost everyone was curious to know the location and remaining distance, every now and then. But the guides did their job right by constantly ensuring everyone’s safety with the determination to not get confused between left and right till the finishing point.

As this point was approached and the blindfolds were removed with a sigh of relief, the world of darkness we were soaked in was slowly replaced with a world full of emotion and memories to be cherished forever. 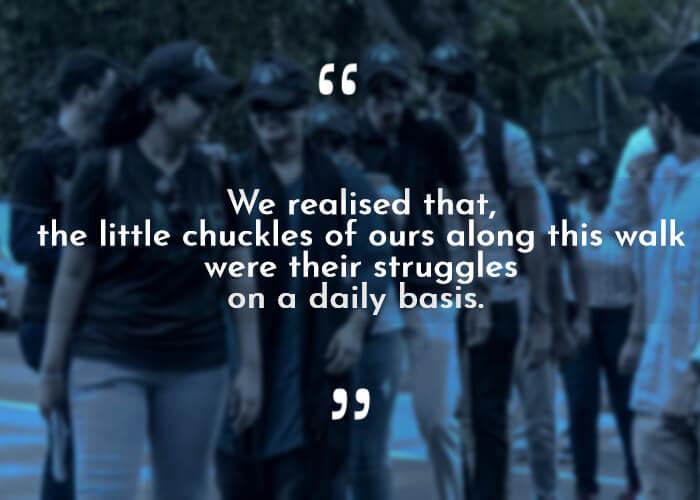 We realised that little things like the green grass, blue skies, traffic lights and street signs, we only see and do not hear, were often taken for granted by us.

We realised what it felt like to never see a blue sky adorned by a rainbow and to only feel the sunshine and dew.

“Tired faces wearing wide smiles” – This was what seen as the certificates of participation were handed over to each and every participant in appreciation of trying the Blind Walk 2019.

While the performers sang their hearts out, the audience absolutely enjoyed every moment of it without a speck of guilt since it reminded them of a beautiful reality in life – The fact that, music can be enjoyed by the visually impaired too, just like them.

To all those who were part of the Blind Walk 2019, here’s a few things that deserve to be mentioned.

Your pledge will be a privilege for someone, someday.

Your generosity will be remembered with utmost gratitude.

The price you paid was truly priceless as your ticket was their ticket to a world of colour, clarity and beauty.

Have no regrets and join the walk next year to feel their plight, imagine their fight and to be their luck if you can!