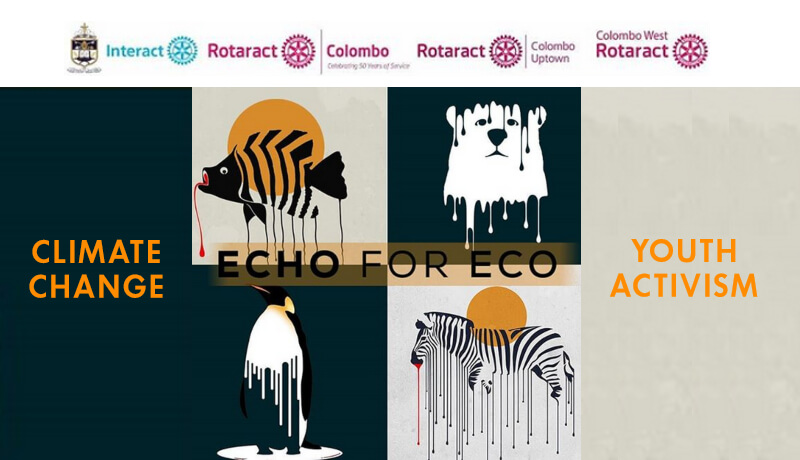 Posted at 03:26h in External Club Events, Others by rcuocfmfadmin 0 Comments

“Echo for Eco” organized by the Rotaract Clubs of Colombo, Colombo West, Colombo Uptown and the Interact Club of St. Peter's College successfully happened on the 9th of November at the Royal College Union Skills Center from 3.00 p.m onwards. The insightful session commenced with Dr. Chathurangi Wickramaratne introducing herself as the Head of Science Division at Environmental Foundation (Guarantee) Ltd (EFL) and her first few words was a simple question to which she gave a simple and concise answer.

Q. What is Climate Change?

It basically refers to the shift in global and regional weather patterns due to an increase in temperatures since mid 20thcentury till the present.

From there onwards, it was all about making us aware of this whole issue by shedding light on the not so known terms, facts and stats and by reminding us of the widely known yet ignored facts.  So here’s what we learnt from her.

Q. Why is the Earth warming?

-It’s the “greenhouse” effect. (Well, you can Google this. But we were given a simpler explanation that the entire audience was able to grasp).

We get energy from the sun. Some of it is absorbed by the clouds and the atmosphere, about 26% of it. About 16% is reflected back in to the atmosphere. The rest of it, about 55% reaches the earth and because the earth is colder than the sun some of this energy is re-emitted. That’s when these greenhouse molecules absorb this heat and re-emit the energy in all sorts of directions and that’s what’s warming up the earth.

Q. So what are greenhouse gases? Examples?

If you consider the timeline from 1850 to 2019, it can be seen that after 2019, there has been a rapid increase in temperature due to energy production – fossil fuel productions.

Given this backdrop, there’s one important agreement that needs to be discussed.

It’s the Paris Agreement which is an agreement within the United Nations Framework Convention on Climate Change, dealing with greenhouse-gas-emissions mitigation, adaptation, and finance, signed in 2016. It mainly aims to keep the global temperature rise this century well below 2 degrees Celsius above pre-industrial levels and to pursue efforts to limit the temperature increase even further to 1.5 degrees Celsius. However unfortunately, so many countries have exceeded these limits already and in Sri Lanka, the temperature increase from about 1850 to 2018 is 0.7 degrees. The Arctic Ocean region seems to be affected terribly with an approximate increase of 2.6 degrees. 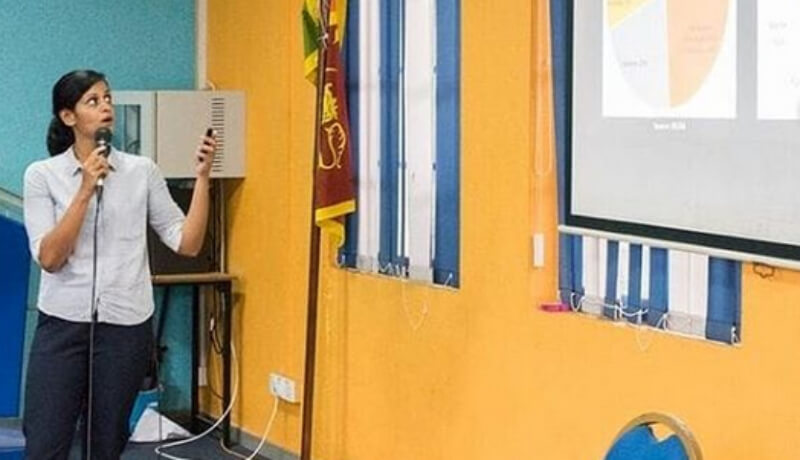 Q. Other than feeling warm, what else have you and I experienced due to climate change?

In short, it’s erratic (unpredictable) weather patterns and the effects of it on wildlife and tourism have been devastating.

Dr. Chathurangi further explored in to how “erratic” it is.

Certain eco-systems turn irreplaceable when temperatures increase beyond a certain level. Regions which are in need of rainfall go through severe droughts. Vice versa, other regions experience extremely heavy rainfall and even before you can think of what to do, the next thing you see is people being displaced in numbers.

She also made us understand how we as individuals, may not be able to relate to it and feel unaffected. Yet if we think of disruptions caused to food production and services provision, we are victims too.

German Watch Climate Risk Index –It’s basically an index that takes in to account weather extremes that are recorded from all over the world and in 2017 according to it, Sri Lanka was the 2nd most vulnerable country to weather extremes after Puerto Rico. It further suggests that every country is vulnerable to climate change.

All of these translate in to serious financial loss. (Flood relief and drought relief – Farmers committing suicide attempts without being able to pay their loans due to harm caused to their harvest – Environmental impacts cannot be considered in an isolated sense – socio economic impact)

Q. What is the main thing we can do to combat climate change?

The first thing to do is switch from coal to renewable energy! Clean energy production such as solar, wind and hydro are absolutely important. Fossil fuels create the biggest harm and it’s high time we push for better transportation modes in terms of the environmental impact.  Besides, it’s important that we protect forest cover while increasing forest cover.

Then, Dr. Chathurangi went on to emphasize upon the importance of de-carbonizing our economy by better mobilising ourselves in order to support the global targets of halving greenhouse gas emissions by 2030 and becoming carbon neutral by 2050. It was further revealed that Sri Lanka’s coal production has increased significantly from 2008 to 2017 despite such global and national efforts to tackle climate change.

Q. What are the demand side management activities we can engage in, on an individual level? (In other words, what can we as individuals do to reduce our carbon footprint?)

Turn off electronic devices, when not in use, switch to CFL and LED, “Reduce Reuse Recycle”,
bulk iron clothes, travel consciously (That’s a real challenge. But aviation happens to be one of the biggest culprits!), try to walk as much as possible instead of driving, conscious consumption (Do not serve like there’s no tomorrow. That ends in a waste dump.), print less and plant more tress etc.

2 of the options mentioned stirred the audience. 1. Go on a plant based diet (using less meat) and 2. Having a small family. Yet, Dr. Chathurangi was able to justify the options and also agreed that these two options sound impractical just as much as they sound effective. The latter out of the two was stated relative to the shrinking resource base compared to the increasing population. In simple words, there isn’t going to be enough water and food in future. However she didn’t forget to mention that population control comes with its own repercussions such as an ageing population. 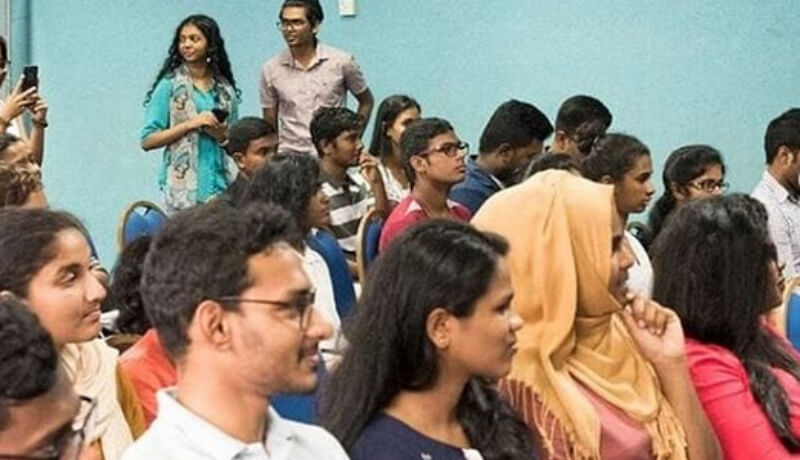 Yes. There’s a significant “Return on Investment” for nature conservation.
Estimates suggest, every dollar spent on nature gives you an approximate return of 8 dollars. But in reality it’s apparent that many don’t seem to be aware of this. For example, the global annual expenditure for ice cream is way higher than environmental conservation.

Afterwards in response to a couple of questions that came from the audience, Dr. Chathurangi revealed the following.

Costa Rica – Is an exemplary developing country as it has been able to, achieve an increase of 50% in their plantation cover, double their population and triple their economic growth, attempting to be 100% carbon neutral. They’ve seen financial growth while protecting nature setting themselves as a great example for countries like Sri Lanka in terms of how we can sustainably capitalise on our eco-tourism opportunities.

The final half of the session was taken over by Bhagya Wickramasinghe who introduced herself as the Head of the Legal Division at Environmental Foundation (Guarantee) Ltd. (EFL). Her focus was on the political and legal background related to environmental conservation and climate change. Thus her main subject of the discussion was the international law making process and national policies.

She initiated by putting forward the big question - How do we regulate what Dr. Chathurangi said? This in fact served a powerful start to the session by reminding the audience of the gravity of this issue.

According to her and as we can see, it has come to a point where action by individual states isn’t enough anymore, leave alone Individual action. Not even states alone. The world needs to act together. The multi-layered nature of the issue was elaborated by pointing out the difficulty law is faced with in touching so many aspects as part of one big issue. It’s harder than crime management.

If you just consider the affected or vulnerable, there are levels of both vulnerability and risk. When you take nations, we have levels of development. So the question remains – How do we address them with policy and law?

Although areas and species can be specified and addressed, the broad scope of climate change doesn’t enable us to do with it. These reasons are why even the law has seen transitions from mere Environmental Law to International Climate Change Law.

Next she enlightened us on climate migration by citing a local example – Trincomalee. During dry seasons, people move away from agriculture and instead go to urban areas in search of a job where they usually settle with being paid daily wages. What makes them able to no longer live in their areas is the lack of job opportunities in such areas.

The current global and national situations prove that most countries have just agreed in principle whereas they haven’t really agreed to the commitment. It was revealed that developing nations have the advantage of receiving financing from developed nations if commitment towards resolution of this issue is made.  However, it demands integrated policy making even involving fields of power and education. 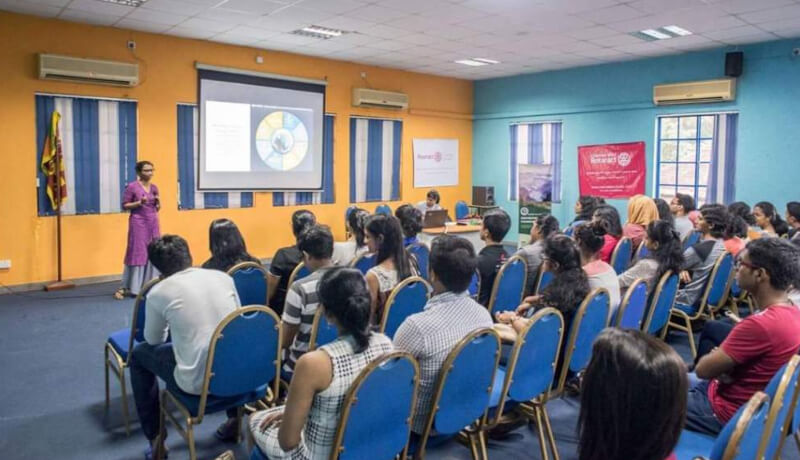 Afterwards, our attention was drawn towards 3 key areas in the legal framework related to climate change.

In conclusion, the following was highlighted.

It might feel unfair for a developing nation to be burdened with climate action while making it to the list of most vulnerable countries too without contributing much towards the issue in the first place. Developed nations are the ones who are largely responsible. Still, this doesn’t suffice for a developing nation to back out by justifying on these grounds. Climate change is a common but differentiated responsibility in the sense that combating climate change is common while the level of contribution is different.

With the hope that Sri Lanka actually adheres to the National Climate Change policy without letting it stay as mere piece of paper on a shelf and urging the young audience to come forward in this regard, her presentation ended and was followed by a quick “Question and Answer” session.

Both speakers always ensured the audience understood everything that was explained for such was their level of enthusiasm as two passionate climate activists engaged in being catalysts of change in the field. They also mentioned a few words about their organization EFL with over 37 years of experience in conserving and protecting Sri Lanka's natural environments through legal and scientific means. Here’s the link if you’re interested! 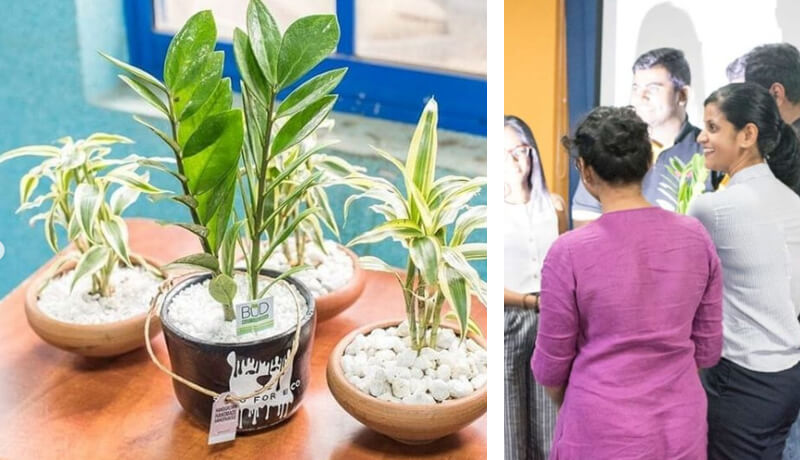 Finally after clicking a group picture, having refreshments and enjoying a few minutes of fellowship, the programme ended, successfully leaving the audience empowered and inspired.

Kudos! to our comrades from the Rotaract Clubs of Colombo, Colombo Uptown and Colombo West for organizing a timely and insightful session that definitely made the voice for mother nature stronger and long lasting! It was a pleasure to be part of the “Echo” for “Eco” ! 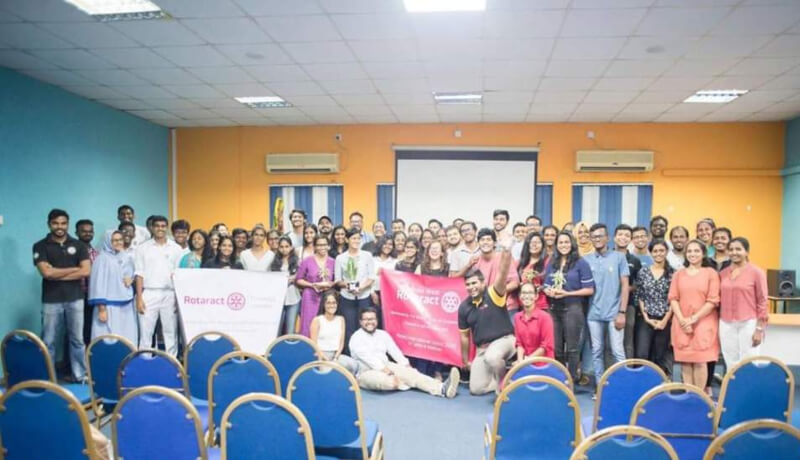