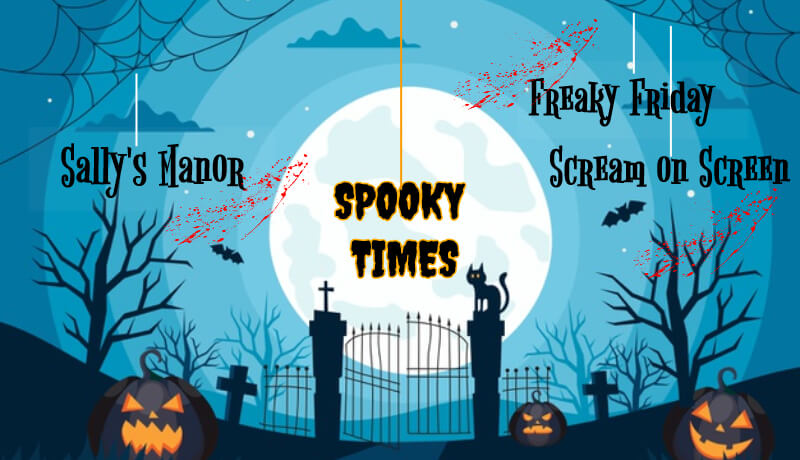 Posted at 19:32h in External Club Events, Others by rcuocfmfadmin 0 Comments

The spirits of Halloween spookily swept across the months of October and November in the Rotaract calendar making these two months frightfully fun with a host of Halloween events organized by various Rotaract clubs! The line-up of events included “Psychoville” by RAC Pearl Island, “Howl-o-ween” by RAC University of Peradeniya, “Fright Night” by RAC NSBM, “Freaky Friday” by RAC ICBT, “Scream on Screen” by RAC ACBT and “Sally’s Manor” by RAC IIT.

RACUOCFMF managed to make it to the latter 3 events in the aforementioned list, rather 3 venues that turned haunted on the day of the event! 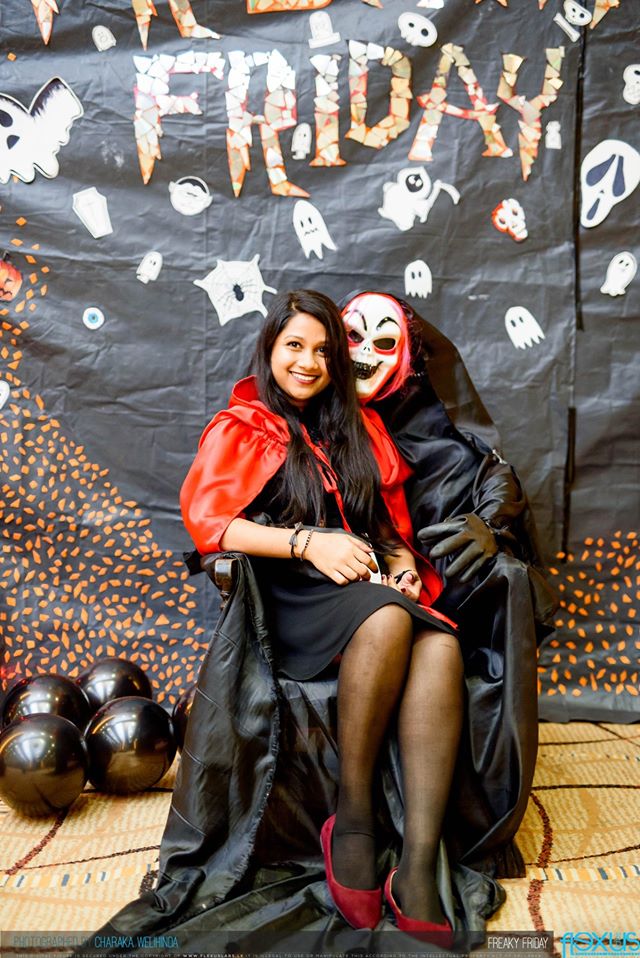 Rtr. Methmi seated on the
mighty throne with the ghoul

It was on this day that the Rotaract Club of University of Sri Jayawardenepura (RAC USJ) had organized an open-mic night in aid of project “Ayubowan”. Following a few hours of refreshing music and raw talent at the Java Lounge I made my way to the Havelock City Clubhouse and as I stepped in I really did feel my casual Friday night turn freaky in a split second!

Apart from the red and black balloons strewn across the floor, all you could see were, Draculas, Nuns, Harley Quinns, Angels, Demons, Prisoners, Jokers, Corpse Brides and also a guy dressed as Princess Jasmine! The list doesn’t end there. There was a McDonalds delivery guy too! Needless to say, they rocked the costume dress competition judged by Minoli Dayarathne and Tymeron Carvalho. Rtr. Charani from RAC ICBT won the title of “Best Costume” while Rtr. Nipun from RAC Colombo Midtown became the winner for the “Best Performance”.

Meanwhile, Rtr. Jehaad, the President of the RAC ICBT who (apparently and mysteriously) went missing days before the event, was found with a half burnt face along with his Secretary Rtr. Methmi dressed up as Little Red Riding Hood!

With spooky music playing in the background and creepy décor around, the house was in fear only till DJ Trev started to spin the party playlist! The house was on fire from that moment onwards. As RAC ICBT predicted, the crowd killed their fear and found the best of their dance steps on the floor. The streaks of disco lights that flashed across the hall to the rhythms of DJ Trev, brought all the ghouls and spirits back to normal, partying hard just like on a typical Friday Night!

Kudos! to our comrades from the Rotaract Club of ICBT for successfully organizing an amazing night of fun and fear, to be cherished forever which definitely made it to the list of spooky Rotaract memories!

In a comfy and cosy yet a creepy ambience, this night was a test of bravery in itself which I think most failed including myself despite stocking up on burghers and mojito. The plan was to munch and drink away the expected waves of fear but it didn’t work at all. The room filled with darkness was lit only by the screen light throughout the night during which “The Curse of La Llorona” was screened first. That was a terrifying start indeed. Phew! Even the club members of ACBT including their President were keeping themselves busy to deliberately distract themselves from all the horrifying scenes in the movie.

After a break, the second and the final movie was screened – “The Sixth Sense”- a story revolving around a little boy who could see and talk to the dead. In short leave alone the sixth sense we felt nearly numb in terms of all senses, as this movie too came with a generous helping of terror.

However like all horror movie sessions in general, the night ended leaving us feel ridiculous for getting scared yet silently terrified till the following morning dawned. It was a night where fear and fellowship collided with a scream! 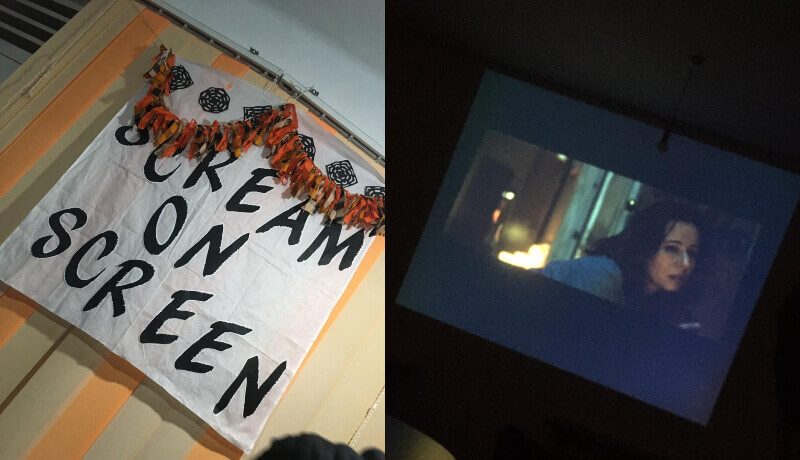 Kudos! to our comrades from the Rotaract Club of ACBT for successfully organizing an entertaining movie night which screamed the spirits of Halloween on screen! (and in the audience for sure too!)

The much awaited “Sally’s Manor” was a hit this year too for the barrier between the dead and living were blurred to an extent as if there was no barrier at all! There were queues of enthusiastic individuals impatiently waiting to take up the dare of meeting the ever famous “Sally”.  After quite a long time, finally arrived our chance and this is when our feeling of “We are so ready” suddenly faded and replaced itself with the feeling of “After all, we might be not so ready”. However, there was no chance by then.

After a few steps in to the very dimly lit horror house with patches of red light, dripping blood, terrifying clowns, zombies and eerie sounds, our hearts started to skip a beat every now and then! After climbing a few fleets of stairs and experiencing countless screams and moments of clinging on to whoever was next to us in fright, we finally arrived at the floor in which “Sally” was kept – a terrifying blood splattered scene that would even make the toughest tremble! Yes. We were scared to death!

With a loud sigh of relief, a speedily beating heart and a feeling of triumph for surviving it, the spooky journey came to an end with yet another anticipated session of the event. By then it was time to rock the floor to the DJ’s beats that commanded our souls to dance away all fears! As the residents of “Sally’s Manor” also joined us on the floor, it reminded us of the lyrics in the Sri Lankan party rock anthem “සුමිහිරි පානෙ” – “නොකා නොබි ලොබකමට වස්තු සොයන්නෙ මැරුනදාට කොෆින් එකෙ අපි නිදියන්නෙ!” (Just like the ones in the coffins at Sally’s Manor).

Kudos! to our comrades from the Rotaract Club of IIT for successfully organizing a top notch horror house and an after party that definitely got our heart beats up and adrenaline soaring! As with every year, this year’s “Sally’s Manor” too topped the list of spooky Rotaract memories!

So going back to Freaky Friday, just in case you wondered why our President Rtr. Shehani Leo didn’t dress up for it and thought it was because she went for it after the open mic night, well you’re wrong. She doesn’t have to dress up! (Get the hint. If you said, “කොහොමත් හොල්මනක් නෙ”, well you got that right! 😉 )

Jokes apart, what can be more terrifying than these Halloween events is the announcement of your university end-semester exams time table that says exams go on till the 24th December! That horrible time table put up on the notice board did a better job than Sally thus creating the perfect end to the Halloween Season!

However, RACUOCFMF managed to survive the “End Semester Exams” too!