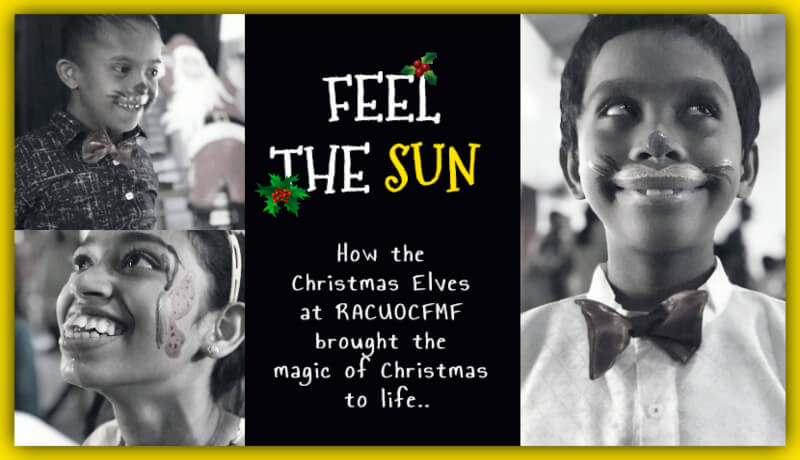 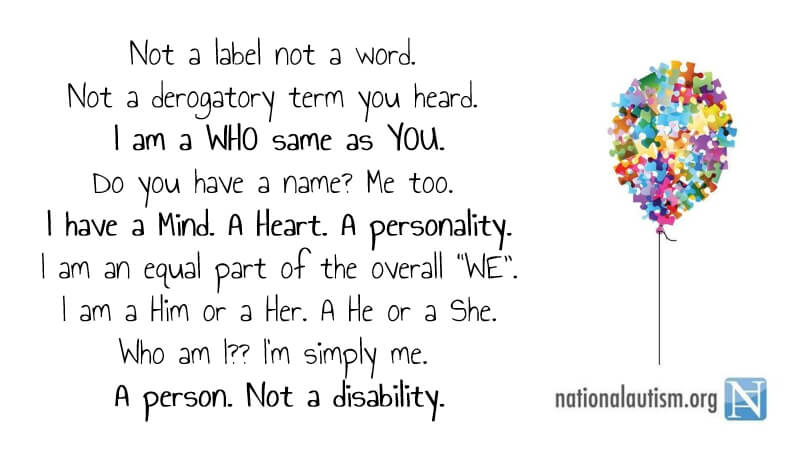 Project “Feel the Sun” (Phase 3 of Mission Compassion) made us strongly feel these words and thoughts.

Every child should have the chance to feel special.

With the hope of adding more sparkle to the beautiful “season of giving” on the 30th of December 2019, we at RACUOCFMF became the Santa to a very special bunch of children at the “Sahana School of Special Education” located on the Biyagama road, in Gonawala, Kelaniya. The calendar page for the month of December in 2019 must have been ripped off, crumpled and thrown in to the bin. Yet, I’m sure this day has been marked with a smiley face and a heart in our minds – All of OURS.

When members from our club and these differently abled little warriors along with their parents and siblings had arrived at the Red Church, Biyagama which was the venue for the programme, we started off with a brief welcome speech by the Project Chairs Rtr. Avishka Chiranthana and Rtr. Anuki Munasinghe. All of them were dressed in colorful attire and had faces full of curiosity and excitement. 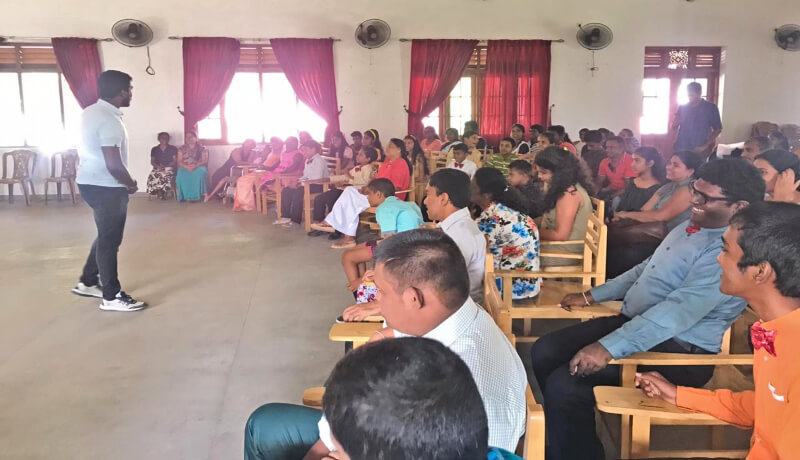 Next there was a singing session for them in which they had to perform. As they clapped, sang and swayed themselves to the tunes of the songs they sang, we applauded them with a melting heart and kept encouraging all of them to sing. We didn’t forget to admire everyone. That was a very heart-warming start to the program. Following that was a solo singing item by a boy from the church choir and a beautiful dance performance by a few of the beautiful souls with special abilities.

Yes, they are special! That’s where we realized that they too deserve all the love and appreciation in this world, nothing less than the others.

Afterwards, we moved on to playing “Pass the Hat” where each time the music stopped, the one with the hat in hand was asked to sing a song or dance. Some of them needed our help to pass the hat and we gladly helped them do that. This session also felt so fulfilling and it was nothing but FUN!

Then came the time for a short break made better with a pack of refreshments arranged by us. The break time was also another bitter-sweet experience. The fact that most of them had to be helped in carrying out the simplest of tasks like unpacking a snacks bag, fitting the straw to the pack of milo and so on, was sad. But the fact that we were able to reach out and be a support to them at least for a few moments, made us feel very happy.

Next up on the agenda was Face Painting and Dancing!

Two of our very own talented Rotaractors patiently and lovingly painted their faces which they really enjoyed. Meanwhile, some of them danced with us to music and we had a great time taking care of them and fulfilling their little requests while dancing. Some approached some of us by signaling us to come and dance with them. Some even requested songs by mentioning band names! Some of them adorably imitated our dance moves too.

In the middle of the dancing came the familiar “HO HO HO!!!” One of our own club members dressed up as Santa Claus made a grand entrance carrying a bag full of presents and goodies, grabbing the spotlight of the event. Our Santa truly brought the magic of Christmas to life to these little warriors who had told us of what they dreamed of having this Christmas. 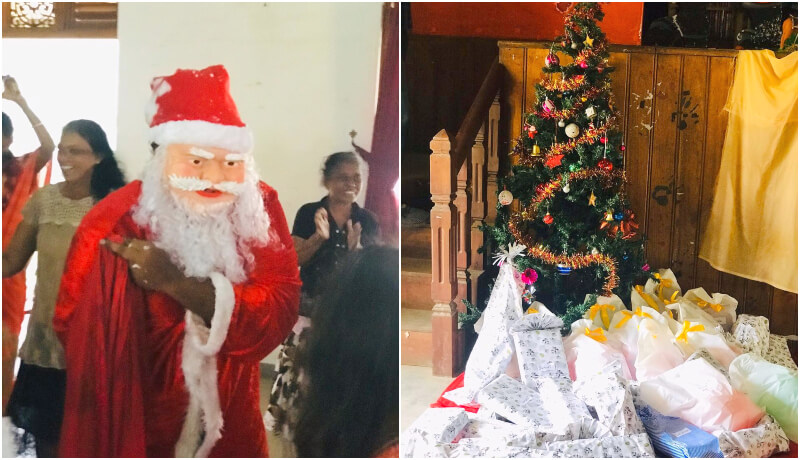 Looking at their wish list, we realized how privileged and blessed we were to lead the lives we currently have despite our constant complaining –especially, being university undergraduates. In the same country not too far from us, there were kids who dreamt of having things we take for granted.

The gifts they had wished for were then distributed individually by calling out their names. To see them chuckle out of joy upon receiving their gifts made us feel content indeed. What a blessing it was to see them smile. Those were the real smiles I repeat!

The Christmas gifts given were of 2 types; one was special present for each one of them which was previously noted down on our initial visit to the school as a wish list which included what they wanted for Christmas and the other one was a common gift pack which had basic stationery items and a lunchbox for their new year in school! Further, along with every gift, they also received a thoughtfully handmade made detailed Christmas cards which was done by one of our fellow batch mates for free.

Apart from all things material, gifts of time and love are surely two basic ingredients of a truly merry Christmas and this was what Project “Feel the Sun” was all about.

We, who merrily called ourselves the “Christmas Elves at RACUOCFMF” were able to collect the presents in just less than 24 hours. (Woah Woah!) Once again, A VERY BIG Thank-you goes out to our kind donors and well-wishers who did a miraculous job in getting the presents and the monetary donations. With your kindness and generosity, you lit our hearts so that we could light their hearts and paint their dreams.

Last but not least it won’t be complete if I don’t mention our Community Service directors for being so supportive and our Club Secretary Rtr. Piyumi Abeywardhana and loving Club President Rtr. Shehani Leo for being a guiding light and pillar of strength behind us in making this event a success.

As the saying goes, “In a world where you can be anything, BE KIND.”

The event concluded with so much joy and love highlighting the fact below. 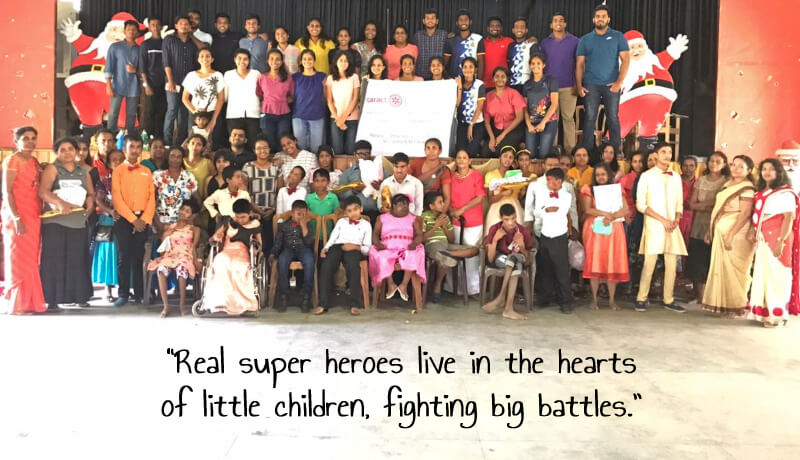 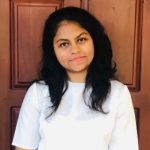