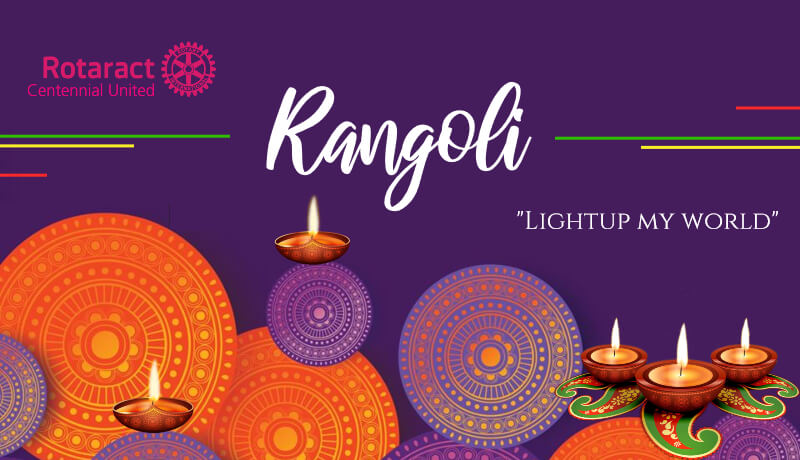 Posted at 19:39h in External Club Events, Others, Uncategorized by rcuocfmfadmin 0 Comments

“Rangoli – Light up my world” organized by the Rotaract Club of Centennial United successfully happened for the 3rd consecutive year on the 12th of January at Idea Hell from 6.00 p.m onwards. Like how a variety of colours seamlessly harmonised in to the magnificent and massive Rangoli at the entrance to the hall that evening, “Rangoli 2020” brought together individuals from various cultures and religions under one roof.

However, when looking at it there was something even more special than just that. Amongst us coming from different cultures there were differently abled talented souls from the Mother Charitable Foundation, too. In fact, “Rangoli 2020” was a project for THEM. What better way to celebrate the month of a new beginning and the Thai Pongal season by offering hope and love to those in dire need of them to prosper in life. 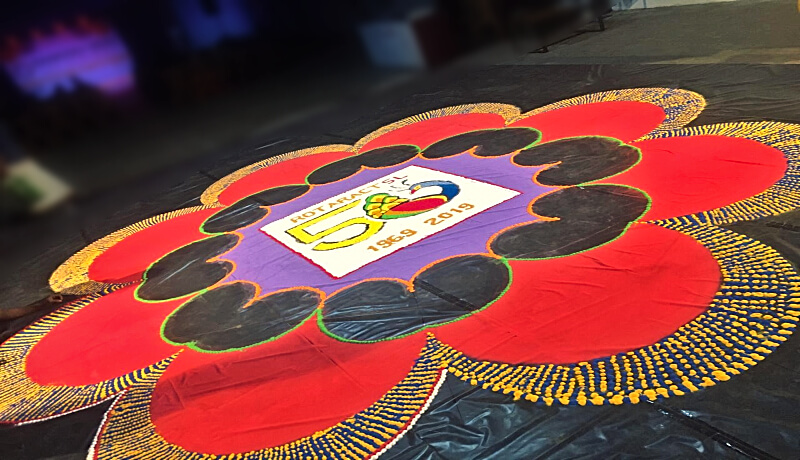 Rangoli drawn with the
“50 Years of Rotaract” logo in the middle
depicting the vision of the
District Steering Committee for the year 2019/20.

Turns out that that the colours in the Peacock have a real meaning behind it. Blue and Golden Yellow to represent Rotary, Cranberry coloured beak representing Rotaract and the feather colours representing our National Flag.

Also, kudos to Rtr. PP. Sugukan Shanthirarasa and Rtr. Jesuthasan Stebi from the Rotaract Club of Jaffna Mid Town for all the effort put in to patiently drawing the "Kolam".

We were warmly welcomed by the President of the Rotaract Club of Centennial United – Rtr. Yoshana Premarathne and the welcome was followed by a trailer which made us walk down the 2 year old memory lane of Project Rangoli. Afterwards, Rtr. Kulani Abayaratna and Rtr. Sanduni Liyanapathirana with their lively performance opened the stage which was later adorned with a string of performances.

Next a video outlining the cause of the project and its beneficiaries was played. The scenes in the video tugged at our heart strings. Frankly speaking as true Sri Lankans, the video made us go “Aney. So sweet / Aney. So cute..”

So here’s what we learnt about this initiative.

“Rangoli – Light up my world” spearheaded by “Mother Charitable Foundation” (MCF) gifted the opportunity for the differently abled children at “Pathum Uyana Centre” to hand craft decorative lamps with unique and colourful designs in an effort to uplift their lives. The Rotaract club of Centennial United with the aim to create an all inclusive society joined hands with MCF to promote and sell the decorative lamps made by their kids and to provide a platform to showcase their talents and skills at Rangoli with traditional music and dances while celebrating both the dawn of a new year and the Thai Pongal season. Funds collected from the sale of lamps will be donated to MCF to enhance educational assistance and medical care facilities provided for these children.

Thereupon, Iresha Sithari, Michelle Imesha and Suresh Wasantha from MCF owned the stage to showcase their talents with the support of a few others. The performance started off with “Mey rata mage rata” playing in the background while the National Flag and the “Sesatha” were held on either sides of the stage. The slow and immersive tunes together with the sight of these children dressed in traditional costumes and wearing traditional jewellery, evoked feelings of patriotism, unity, sympathy and much more – all at once.

Looking at the Sesatha, a beautiful symbol of the vibrant Sri Lankan heritage, my mind couldn’t help but resonate with colourful Rangoli motifs, a symbol of the rich Indian heritage and Tamil culture, while yet again reminding me of how similar we all are despite our differences of creed culture and distance. Sometimes the little things that often go unnoticed convey the deepest of meanings if you stop for a while and ponder about them. 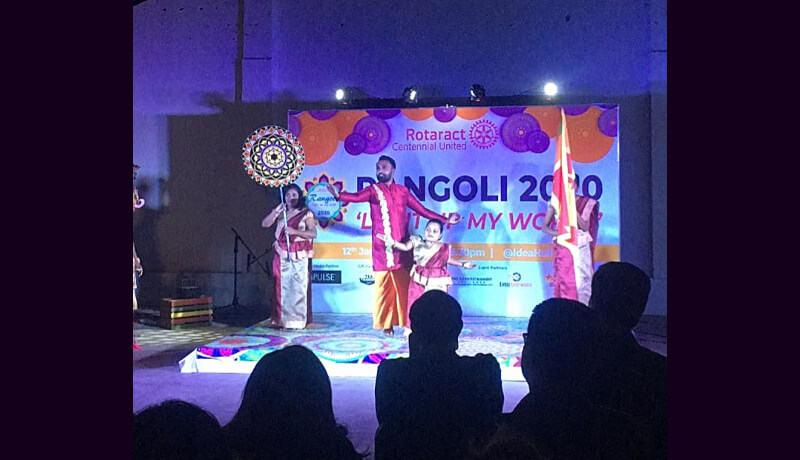 Suresh took over the next few minutes of the item which treated the audience to an invigorating Devil dance backed by a typical Yaka dance music track that filled the hall with loud sounds of chanting and beats of traditional Sri Lankan drums. 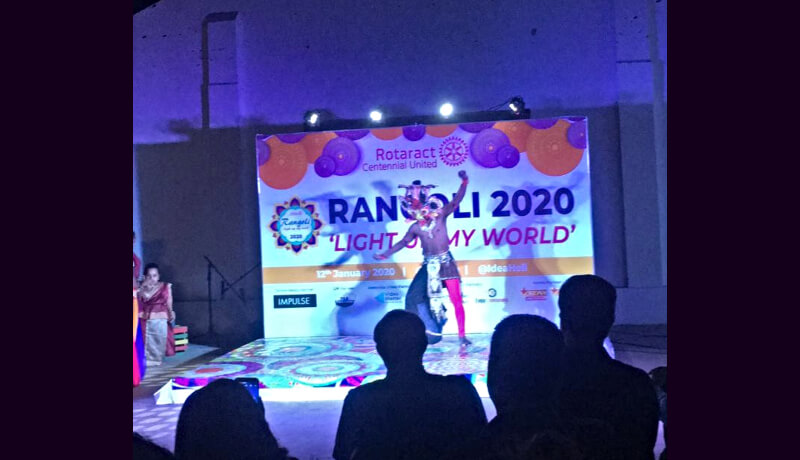 The final part was taken over by two girls who cleverly retained the energy brought in by the Yaka with their swift Bollywood moves as they danced to Aaja Nachle! While they twirled to the catchy beats clad in strikingly coloured skirts and tops, even their plaits whirled round in the air along with them thus captivating the audience who spontaneously started to clap along till the very end. The performance received a standing ovation from the audience accompanied with a loud applause of admiration. It indeed showed how able they were. 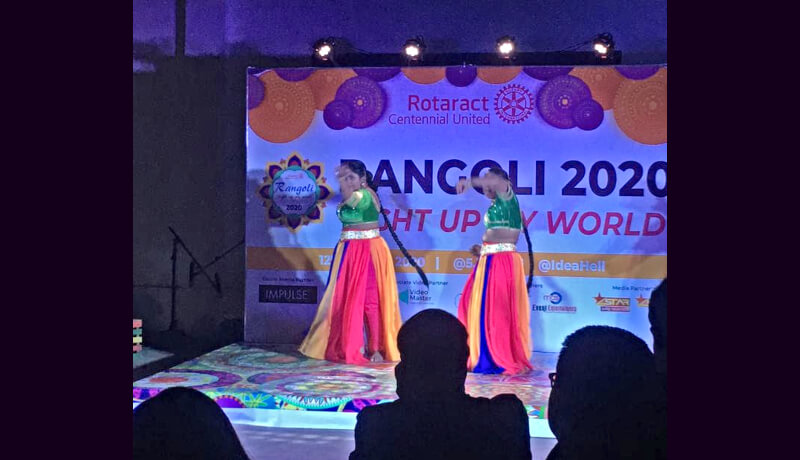 Next the Chief Guest for the occasion, the Charter President of the Rotary Club of Centennial United – Rtn. PP. Prasantha Lal De Alwis addressed the gathering where he began by sharing an emotional yet inspiring chapter of his life story which was about his second son named Abishek who’s differently abled.  He said he felt the heartbeat of this project as the father of a differently abled child and therefore honours the club for continuing such a wonderful initiative that helps these souls find their skills.

With a sense of gentle pride he encouraged the audience to help such children find their path in life just like how he did the same with his son Abishek who was born in the year 2000 and grew up to be a perfect child by today. “My son fortunately loves music. He’s a good drummer” he affectionately said.

As revealed by Rtn. Prasantha, “Abishek” means “enthroned” and by the time he had told the story of his son and him, we felt that as a father he had been nothing short of a King to his son by gifting him the treasures of love and support to crown him with the independence and confidence to lead a successful life.

He then moved on to speak about the movements of Rotary and Rotaract where he said that he believes Rotaractors are the blood and flesh while Rotarians are the skeleton that holds them and together they create a very strong force in society. Further, quoting last year’s Presidential Elections, which he referred to as an election that was divided along racial and religious lines, he expressed his pleasure about the way Rotaractors in the same island strive to bring everyone together as one nation, Rangoli 2020 being one of the prime examples.

Stating that the young generation including all Rotaractors were the sole hope for the future and urging the young audience to continue being united, he concluded his heart warming speech by saying, “This project is amazing. I’m proud to be part of it”. 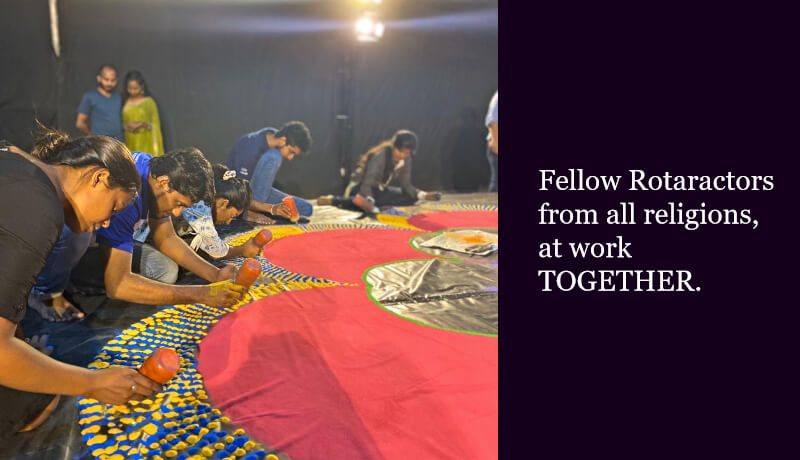 Up next on stage was a duo representing “Shrish Baratham and Yoga” with their truly divine dance of energy. It was one beautiful fusion in which the powerful and dramatic gestures of Baratha Natyam met the grace, agility and stunning balance of Yoga. Needless to say, the audience was left spellbound and mid-way through the performance they received an applause which continued.

At one point when the duo balanced on one leg and held hands together to create a captivating pose on stage for a few seconds, it once again evoked thoughts about unity in our minds. “Unity is beautiful but at times it can be shaky with all the differences, yet it’s all worth it, for that’s how beautiful it is” we thought to ourselves.

Keeping the spirit of Rangoli 2020 alive, the President of the Rotaract Club of Cinnamon Gardens - Rtr. Haneekah Rahil took the stage with her mesmerising voice. Afterwards, an award winning Sri Lankan actress and media personality, Ms. Niranjani Shanmugaraja addressed the audience as the Special Guest for the occasion.  This was followed by a traditional musical recital by the students of “Veena Natha Laya” which was made beautiful with the sounds of the classical “Veena.”  The string of performances continued as Rtr. Nanditha Mishra representing District 3232 dazzled the audience by flawlessly performing a Bollywood dance adorned by her elegance.

Afterwards, District Rotaract Representative Rtr. PP. Krishan Balaji, fondly known as “Bala”, took the podium and as always he proved his eloquence with the few words he shared which had an easy to remember and fruitful message to take home.

“Light is the reason there’s life on earth, it’s the source of energy that keeps us alive” he said, setting the perfect start to his address to the gathering. He admired the participation of the Rotaract Club of Jaffna Mid Town and the food stalls set up by various Rotaract Clubs which showed that Rangoli 2020 was all about lighting up different communities and bringing them together. His advice was to come together in everything we do.

The stalls deserve a separate paragraph. You can find it at the end of the article!

By telling how these differently abled children were actually as able as us or even more, he showed us that the inspiration and motivation we tirelessly keep looking for is more often than not, right around us. In the meantime he revealed that he had decided to come for Rangoli 2020 instead of being present at a wedding that same evening. He paused for a couple of seconds, broadly smiled and gladly mentioned that the decision he took was the right decision for it really enlightened and enriched his life. “I urge everyone to take this flame forward” he said in conclusion.

Following yet another energetic performance by Rtr. Diayana Thresha and Rtr. Vithya Subhasranjan, tokens of appreciation were given to the distinguished guests for their gracious presence.

In conclusion, Project Rangoli 2020 Co-Chairperson, Rtr. Dahara De Costa in her vote of thanks stated that their long run of hard work had successfully paid off. She further expressed how eternally grateful they were to all well-wishers and club members who supported the project which successfully achieved the target of selling 1000 lamps. Ending her vote of thanks with in a joyful tone she said that, everyone who purchased these lamps were actually shedding light on a community that has much to offer to society.

Finally, everyone was invited to light the colourful oil lamps. 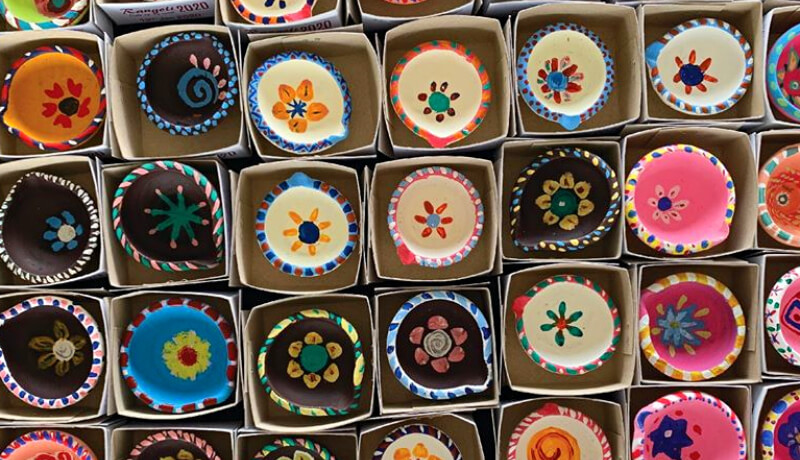 Back to the Food stalls!

The Rotaract Club of Wellawatte did a “Poori” stall where they served “Hot Hot yummm Poori with that nice Poori Curry” as our beloved President - Rtr. Shehani Leo says. The Rotaract Club of Colombo North had an “Achcharu” stall which served Guava, Pineapple and Ambarella achcharu along with orange juice and black currant juice.  Both stalls together offered just the right blend of spiciness and sweetness to add to the beautiful feeling of contentment we all experienced at Rangoli 2020! 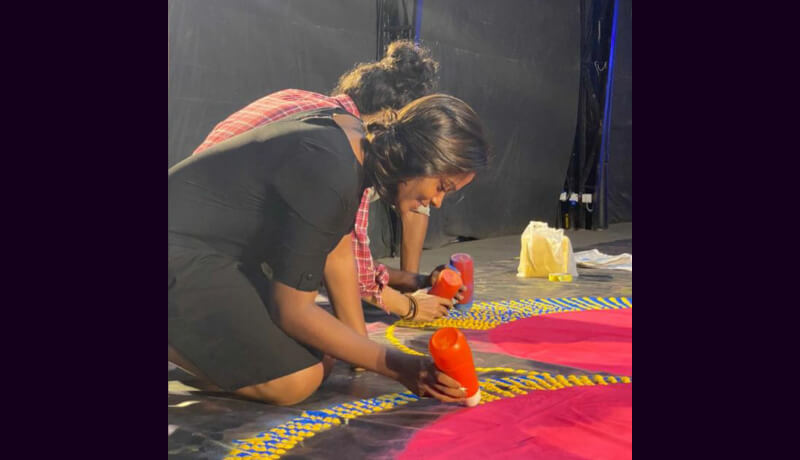 On a totally unrelated side note, don’t you think that Pizzas look a bit like Rangolis? (Literally, “FOOD” for thought.) That being said here’s our President looking like some sexy Pizza Parlour-waitress pouring ketchup on a Pizza.

Kudos! to the Rotaract Club of Centennial United for organizing  such a wonderful project! 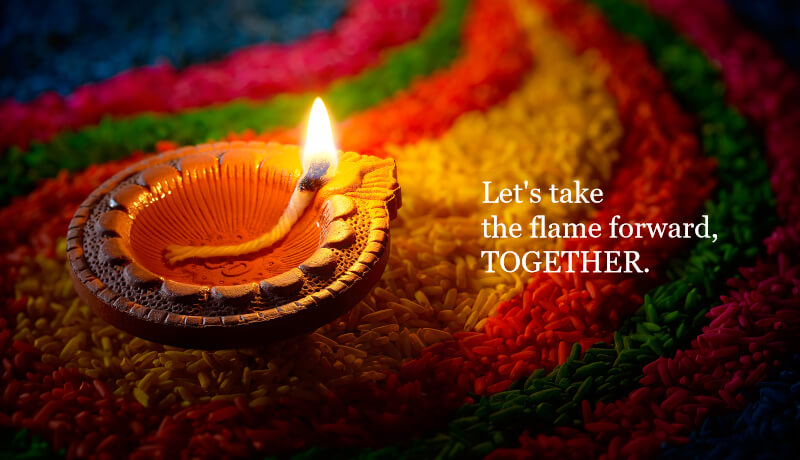