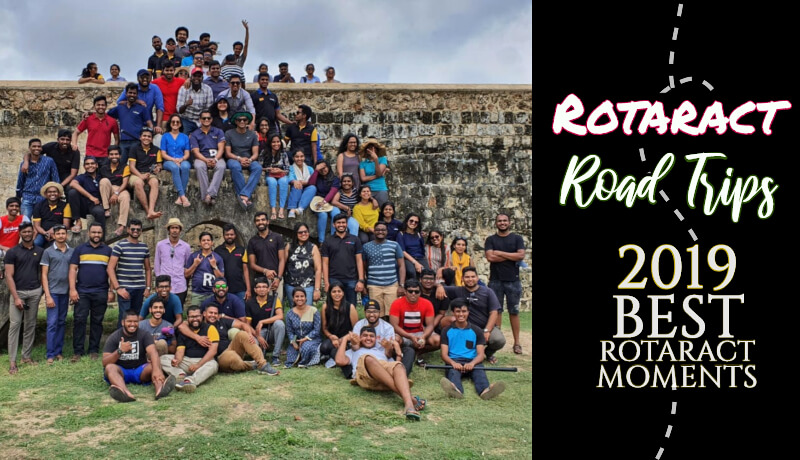 Posted at 12:41h in District Events, Others, Uncategorized by rcuocfmfadmin 0 Comments

“Rotaract Road Trips” was a fresh concept introduced by the Club Service Avenue of the District Steering Committee for the year 2019/20 and it turned out to be one of the best decisions ever as it gifted life-long memories to all fellow Rotaractors of the District!

So here’s a throwback to all those Road Trips that RACUOCFMF was fortunate to be part of and these surely top the list of the “Best 2019 Rotaract Moments” that left a foot print in our hearts. 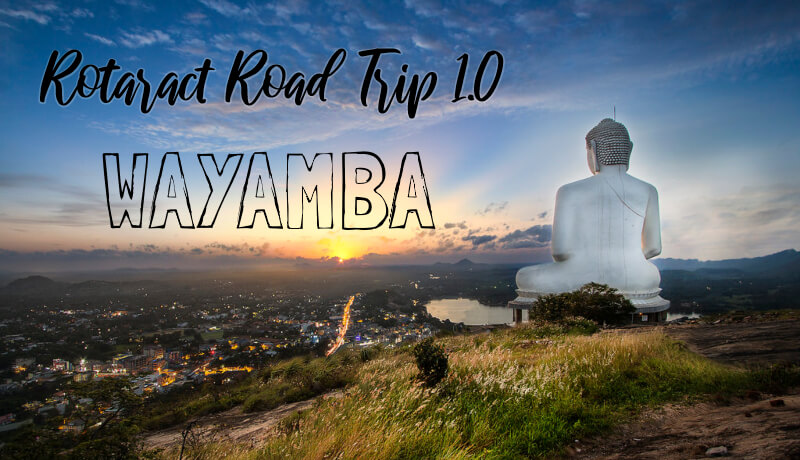 A little less than a 100 Rotaractors flocked to Racecourse early in the morning on the 18th of August 2019, feeling excited yet sleepy at the same time. The 2 buses which left at around 6.30 a.m reached Kurunegala at 9.15 a.m where the crowd in one bus made their way to Hotel Blue Sky for the District Council Meeting and the others visited the ancient Athugala Temple.

Following the adjournment of the District Council Meeting for the month of August which was hosted by the Rotaract Clubs of Kurunegala, Mid City and Neptune Edification, the customary fellowship session accompanied with refreshments took place. In the meantime, the Rotaract Club of Kurunegala was energetically prepping for their 5th Installation Ceremony which started at 12.00 noon. As all Installation formalities came to and end, we were well treated to a delicious lunch after which we headed to the University of Wayamba to attend the Charter Installation Ceremony of their newly formed Rotaract Club. 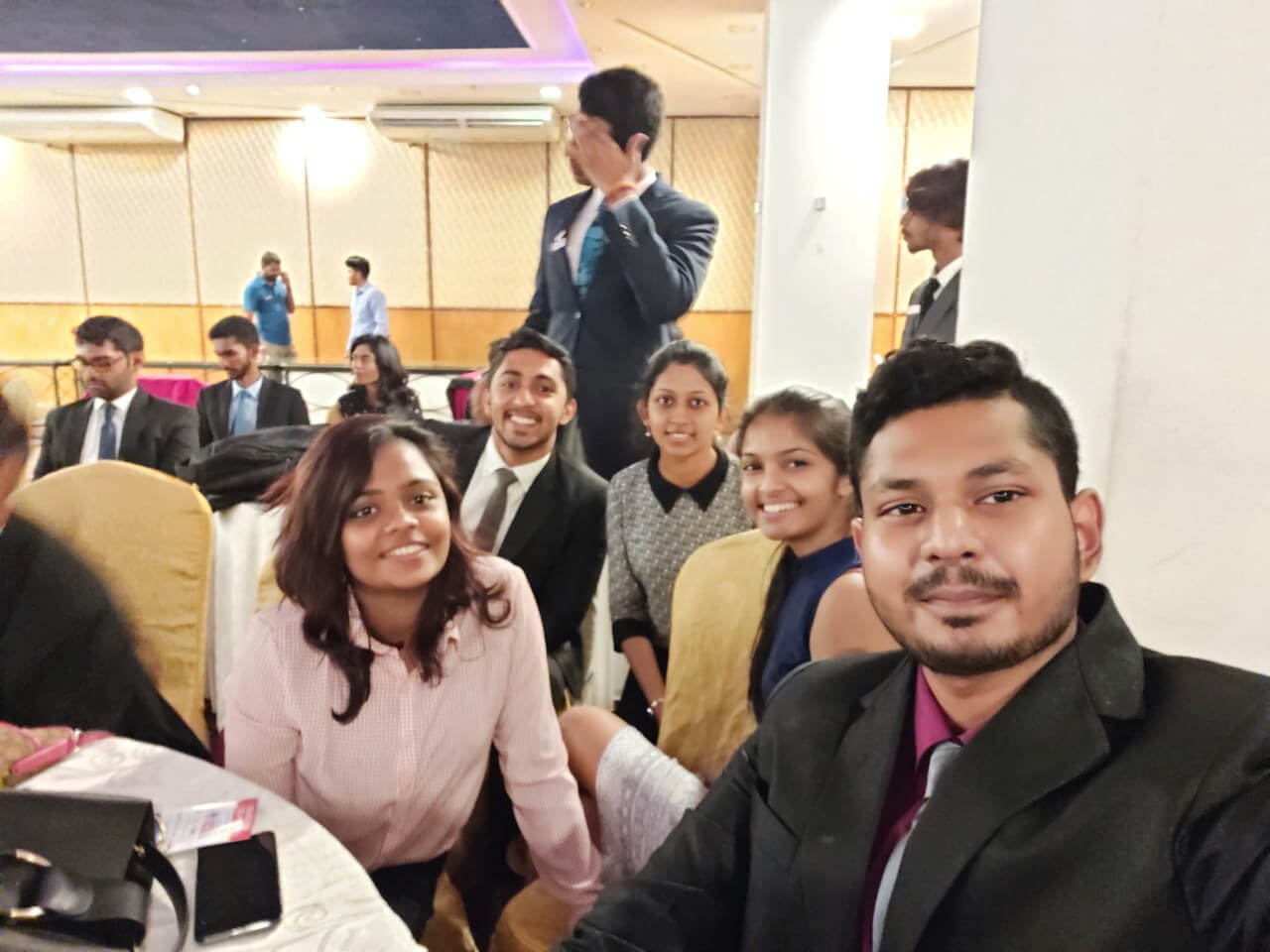 It was a pleasure for all of us to see our how our Rotaract Family kept growing bigger each year with individuals from various regions in the country deciding to join the movement.

With the end of this Installation Ceremony, the official formalities for the day came to an end too and it was time for the much awaited and thus the most exciting session of the Road Trip!

From the moment we stepped in to the buses and till we had to step down back in Colombo late night, the sing-a-long session and dancing continued with the same level of energy!

Moments of loud laughter and musical talent reigned the wonderful night of fellowship in the buses. We stepped down with our little luggage and lovely memories while eagerly looking forward to the next Rotaract Road Trip all the way to the Northern Province! 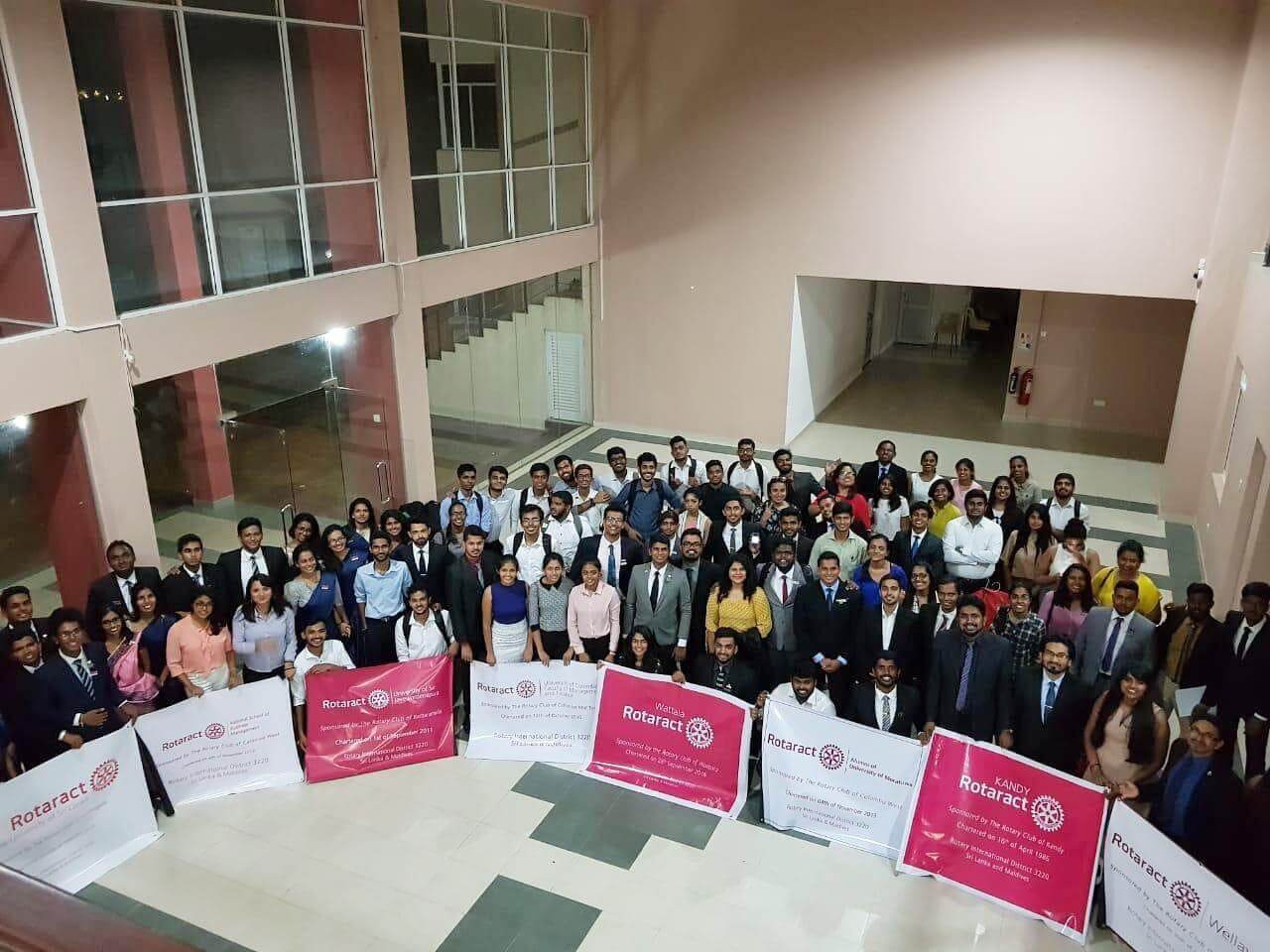 The day we had been impatiently waiting for finally dawned with our departure at around 10.00 p.m on the 12th of September 2019! 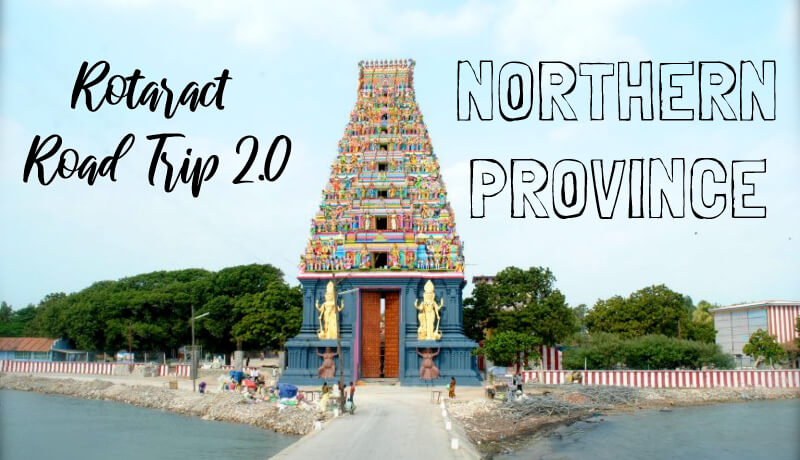 At the beginning it was a sleepless night in the bus and it seemed as if it was a continuation of the fun night in the bus during the first Road Trip to Wayamba. However one by one, we all began to fall asleep like dominos. Yet, at around 3.00 in the morning we stopped at Anuradhapura for “Koththu” to re-energize ourselves and finally reached Jaffna a few hours later at 7.00 a.m on the 13th of September.

Day 1 – After filling ourselves with typical Jaffna delicacies, we visited the “Nagadeepa Raja Maha Viharaya” and the “Nainativu Napaooshani Amman Kovil” located on the “Nainativu” island, off the cost of Jaffna Peninsula. The ferry ride with all our fellow Rotaractors to the island sheltered by coconut palm groves and palmyrah palm trees made this session a memorable and novel adventure indeed!

The next half of the day was spent at the beautiful Casuarina Beach. While gazing at the stunning blue waters, it did not take us long to realise that this nature’s piece of pure splendour was named after the signature trees lined along the beach - Casuarina Trees! This was where the beach clean-up “We Love the Sea” took place and it was jointly organized by the Rotaract Clubs of Colombo Midtown, Colombo West, American National College, Chullipuram, Chunnakkam, Kandy, Nallur Heritage, Informatics Institute of Technology and us!

After a quick dip in the beach we left the sandy shores of Casuarina that looked a lot brighter following our efforts. That night we had our dinner in the Jaffna town and went back to our accommodation where the day ended with a “Baila” session that kept the night young and going strong even way past midnight.

Day 2 – The day began with a scrumptious breakfast at “Ammachchi”- a famous local outlet in the North conducted entirely by women who are survivors of the conflict. Here we savoured a wide variety of nutritious yet surprisingly delicious local dishes cooked by them with much love and devotion. Afterwards, we attended the District Council Meeting for the month of September which was jointly hosted by the Rotaract Clubs in the Northern Zone.

Next was the planned adventure for Day 2! – Jaffna Fort exploration! We did not realize how time passed while trying to capture the beauty of this lasting legacy of the country’s colonial past and the view from the ramparts was just stunning. This was followed by our visit to the “Nallur Kovil” which unfortunately was closed at that time much to our disappointment.

Then came the moments of the unplanned adventure! – The search for Jaffna crab curry! Yet once again, after about half an hour of walking in the scorching sun, all we ended up with is steaming bowl of disappointment instead of the crab curry. This is when we stopped to enjoy “Thaali” for lunch and afterwards stepped in to the RIO Ice-cream Parlour to beat the heat with its array of mouth-watering flavours.

We returned to our accommodation and set off to “Kankesanthurai” where we had one thrilling time at the beach! To take a dip in its glittering waters with a bunch of friends was definitely the best thing to do after traversing the city in the hot sun!

That night’s dinner was at “Gaja Restaurant” and the few remaining hours of the day were spent playing friendly card games, sharing interesting stories and singing together as usual.

Day 3 - The third and final day was all about the Installation Ceremonies of our fellow Rotaractors in the North. Firstly the Joint Installation Ceremony of the Rotaract Clubs of Jaffna Peninsula, Nallur Heritage and Chullipuram was held where Rtr. Joy Mathavan, Rtr. Sukumar Sutharshan and Rtr. Jathusha Shanmuganathan were gracefully collared as the Presidents for the year 2019/20, respectively. District Rotaract Representative Rtr. PP. Krishan Balaji’s speech in Tamil and the felicitations done in Tamil were truly special moments that we shall hold close to our hearts as they bore testimony to the beauty of this multicultural movement. No matter the creed or culture as we are proud to be Rotaractors, indeed.

After our final Jaffna style meal for lunch and a few minutes of strolling in the beautiful vicinity, we settled down for the second Joint Installation Ceremony of the Rotaract Clubs of Jaffna and Jaffna Midtown. Rtr. Varatharasa Rajinthan and Rtr. Jesuthasan Stebi were gracefully collared as the Presidents for the year 2019/20, respectively. Once this Installation Ceremony ended with fellowship, refreshments and the clicking of a group picture, it was time to bid Goodbye to our comrades in the North which was actually a sad moment for we knew we would miss their great hospitality especially since we rarely get to meet them. The fact that they yet manage to carry out projects while preserving the spirit of the movement amidst all challenges is commendable indeed.

Back to a night in the bus!

The night was all about trying your level best to get some sleep and yet suddenly waking up to a roar of laughter or your name being shouted by a bunch waiting to capture you on camera as you fell asleep. When our phones started buzzing on receiving non-stop Whatsapp messages, we knew the Paparazzi in the bus had done their job right. Almost everyone in the bus that night became a joke. 16th September, early in the morning, we reached Colombo officially concluding Road Trip 2.0!

Now, that undoubtedly was a TRIP TO REMEMBER! 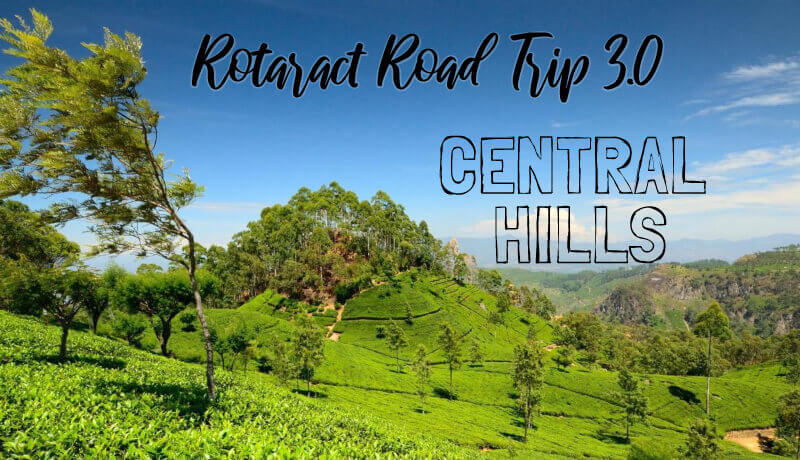 The starting point was Racecourse once again and the journey began at around 10.30 p.m on the 4th of October. Excitement was in the air, since by then we all knew that every Rotaract Road Trip would be a memorably fun experience! The night travelling experience was like how it was during other Road Trips too yet it didn’t have a single dull moment. It was about 6.30 a.m when we reached the scenic Badulla and by then we had made a couple of new friends too from the night before.

Afterwards we journeyed to the University of Uva Wellassa to attend the 7th Installation Ceremony of the Rotaract Club of Badulla where Rtr. Charutha Dayarathne was collared as the President for the year 2019/20. Much to our amusement, we were treated with the traditional "Belimal" drink served in coconut shells, along with fresh milk toffees. Following a tasty lunch, we set off to Nuwara Eliya fondly known as the Little England of Sri Lanka for its blend of natural country side beauty and cool climate. Needless to say, we thoroughly enjoyed our stay here and the night was spent the usual way- singing, playing cards, gossiping and making fun of each other till we doze off! 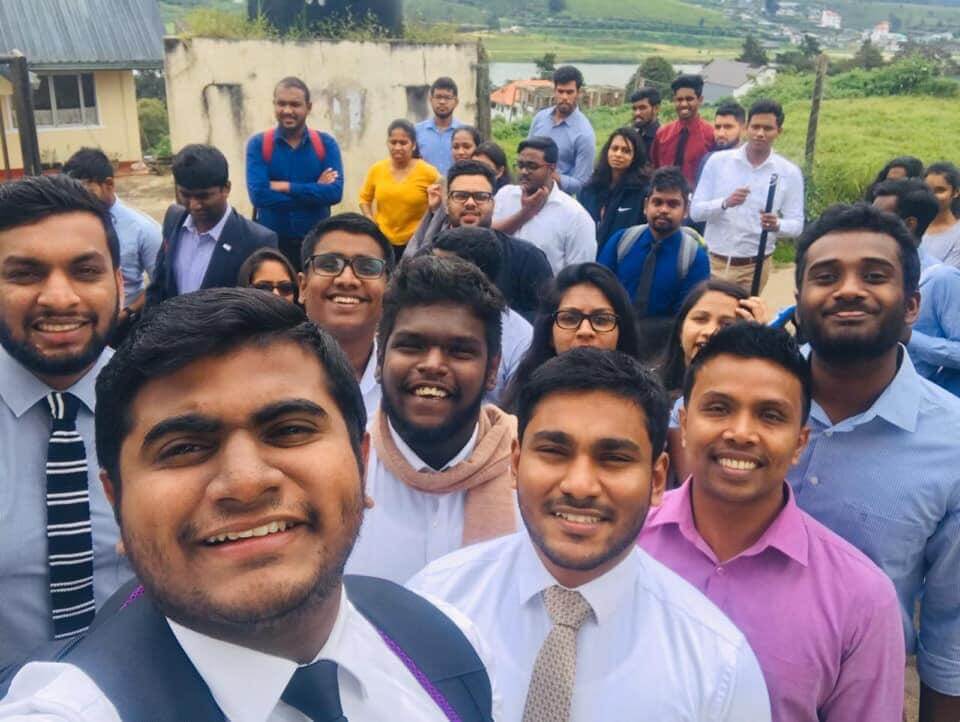 The following morning, we attended the 3rd Installation Ceremony of the Rotaract Club of Hatton Kotagala where Rtr. Merlin Gomez was collared as the President for the year 2019/20.

On our way back to Colombo, the “Bus” traditions were followed; Paparazzi and “Baila”.

The memories of this Road Trip too remain as vivid as the serene tea clad emerald landscapes of the hill country.

Sadly and unfortunately all we could experience of this Road Trip was limited to the Whatsapp message only! Sobs* Yet, one of our members living in Kandy was able to make it to the Installation Ceremony of the Rotaract Club of Kandy. 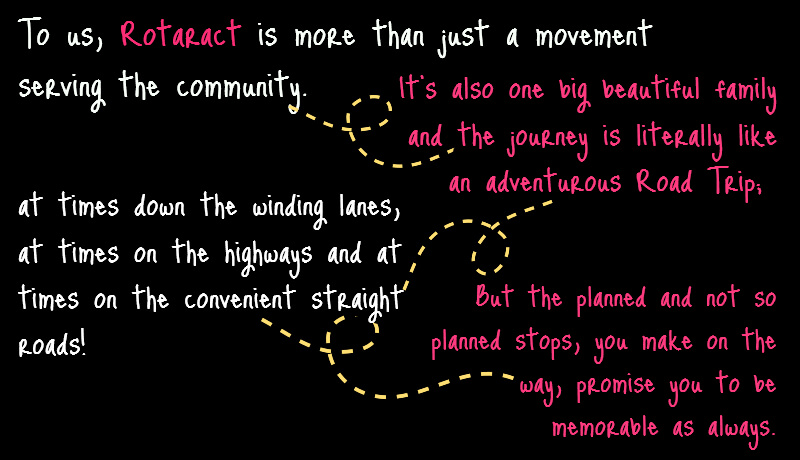