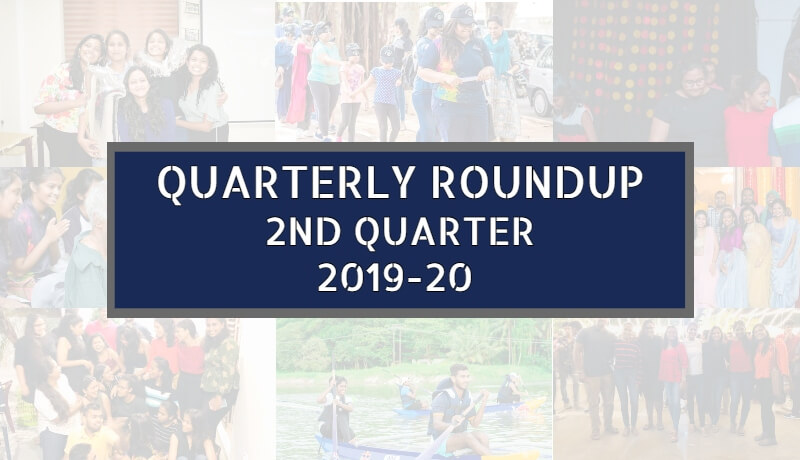 Posted at 15:08h in Round Ups, Uncategorized by rcuocfmfadmin 0 Comments

Here is a recap of how our First Quarter unfolded:

The blog of RACUOCFMF is a highly functional and important element of the club and throughout the 2nd Quarter, we reached the following milestones in the blog.

The official club and board group on WhatsApp burst with joy as we entered the “K” club on Instagram. (Approximately at 10 p.m on the 17th November!) As a club, we are really grateful to all of the support we’ve received from everyone throughout our incredible journey of service.

BLIND WALK 2019
Blind Walk 2019, organized by the Rotary Club of Colombo Midtown, together with the Rotaract Clubs they sponsor, which are the Rotaract Clubs of University of Colombo – Faculty of Management and Finance, Colombo Midtown, Achievers Lanka Business School and ACBT, was focused on the theme “A Child – A Future”.
Nearly 200+ sympathetic individuals joined the walk, which they had to do blind folded, through which they felt just a pinch of the hardships the blind goes through. The organizing clubs purchased and donated spectacles to children in need through the funds collected from the walk. Eye-pledges for donating eyes were also taken at the walk.

RELIVE 2019
A project organized to commemorate the International Elders Day, was organized with the intention of giving love, attention and affection to those who deserve it, but didn’t get it from their children. The Rotaractors of RACUOCFMF went to the “Home for the Elders” home located in Borella, and started off with serving refreshments to the elderly who were residing there. As the day went by, an outdoor singing session was conducted which lasted for hours, because they thoroughly enjoyed it. This project taught us the importance of taking care of our parents till their last breath.

This project was organized for the second time, as a phase of the project “Mission Compassion”, at the “Heaven and Sunshine” home in Punchi Borella. The home was shelter for women who are rape and abuse victims, and had not been accepted back home by family or loved ones. It was also home for the kids of some of these women, who had gotten pregnant through rape.

The objective of the project was to spend some quality time with these survivors, giving them a day to remember, forgetting all their hurt and pain. We played games such as passing the hat and musical chairs with them, which was followed by a sing-along session and a Christmas card making session, all which they highly enjoyed. The day came to an end as we gave them refreshments and a gift pack of essential items for both the women and the kids at the home.

This project was organized for the second time, as phase 3 of the project “Mission Compassion”, for the children at the “Sahana School of Special Education” located on Biyagama road in Gonawala, Kelaniya. These children residing here are little warriors battling downs syndrome and autism.

The objective of the project was to spend some quality time with them and gift them what they wished to have for Christmas. Each child received a common gift pack and a customised one too along with a thoughtfully handmade Christmas card. The day’s program included singing, dancing and face painting sessions as well as a few games like “Pass the hat” with a refreshments break in the middle. All of us enjoyed and we realised that we sometimes take for granted is what others long for.

Wave Runners, first ever outrigger racing challenge organized in the history of Rotaract in Sri Lanka, was open for both Rotaractors and Non-Rotaractors. The day of the event dawned with 21 duos turning up to compete at the Diyawannawa Rowing Centre.

While the high spirited competitors paddled their route to potential victory, the cheery supporters were uplifting their spirits even more, while enjoying themselves dancing along to the beats of the DJ. The crowd witnessed many ups, downs and rounds of the competitors before finally clapping along to the Champion duos of the two categories Mens Doubles and Mixed Doubles. The evening didn’t stop there, as the crowd was dancing away, until rain decided that maybe it was time we ended now!

This was organized in order to celebrate the mark of reaching the 10th year since the Rotaract Club of University of Colombo, Faculty of Management and Finance was originally chartered.

It was an intimate event carried out with the presence of current and past club members, past presidents of the club and a few members representing the District Committee. The celebration unfolded as we took that time to look back at all the ups, downs and the accomplishments achieved by the club during the past decade. Tokens of Appreciation were given to those who are behind the success of the club today.

A NOT SO SILENT NIGHT

This was the club’s Christmas party! Rtr. Vishmi Amendri, one of our Vice Presidents for the year 2019/20 graciously hosted us at her place for a night full of fun and frolic! We played a few games, sang our hearts out, savoured the delicious dinner, gobbled up the home-made desserts and danced the night away in full sway. Above all, we laughed a lot which was actually expected and this why we named the night a “Not so silent night”.

Q2-ENG-Internationalserv
is
is2
is3
is4
is5

A Letterhead Exchange was carried out with the Rotaract Clubs Panvel Sunrise, Pune Mideast, Pune Camp Next Gen, Aundh and Pune Hillside from District 3131 on the 17th of October 2019. It took place at Achiever’s Lanka Business School in order to express our interest in building a bond across borders with a group of Rotaractors that share similar values and interests as RACUOCFMF. It was carried out with the intention of establishing an understanding with the Rotaractors from India in order to be able to expand the scale and variety of projects initiated by the club.

A Letterhead exchange was carried out with the Rotaract Club of Forestry College Ponnampet on the 27th of November 2019. It took place at Achiever’s Lanka Business School in order to express our interest in building a bond across borders with yet another Rotaract Club from our neighbouring country, India, which shares similar values and interests as us. As aforementioned, it was carried out with the intention of establishing an understanding with the Rotaractor and his club in order to be able to expand the scale and variety of projects initiated by the club and also to receive a better understanding regarding the cultures of the two clubs and countries.

This project, which was organized for the fourth consecutive time, was organized with the motive to create awareness among the students of private and international schools, on the value of sharing what they have with underprivileged children.

This year, the school selected was Hewavitharana Model Primary School in Kotte which comprises of 300 students from nursery to grade 05. Monetary and non-monetary donations were collected along with the support of the Interact Clubs of St. Paul’s Girls School Milagiriya, Ilma International School, St. Peter’s College and Muslim Ladies College. Donations were distributed in a form of a gift pack for each student at an event organized by the school for this purpose. A few general items were donated to the school as a whole.

This project, organized in alignment with Diwali (The Hindu festival of light), was organized for the second time and was one of the most awaited Bollywood nights of the year. The promising gala celebrated Bollywood and its extravagant nature with the participation of many Rotaractors and Non-Rotaractors who were all dressed up in true Indian style.

From the items performed at the night, to the food served and the ambience of the event, the desi girls and boys were given the feeling of a trip to India. The energy of the night kept rising along with the beats of the DJ, which also resulted in a dance off, out of which the Desi King and the Desi Queen of the night was selected. 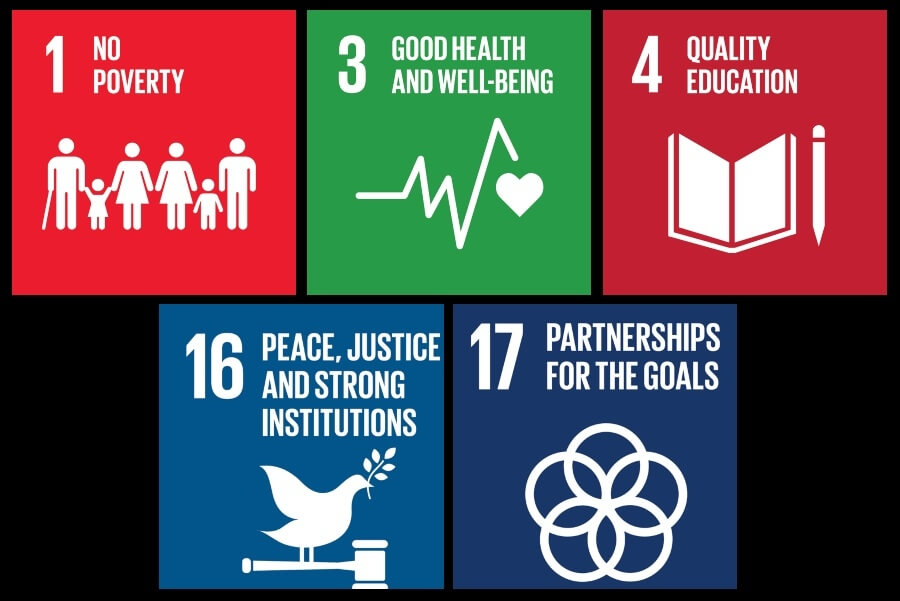 The following Rotary Focus Areas were covered throughout the 1st Quarter via the projects completed by RACUOCFMF. 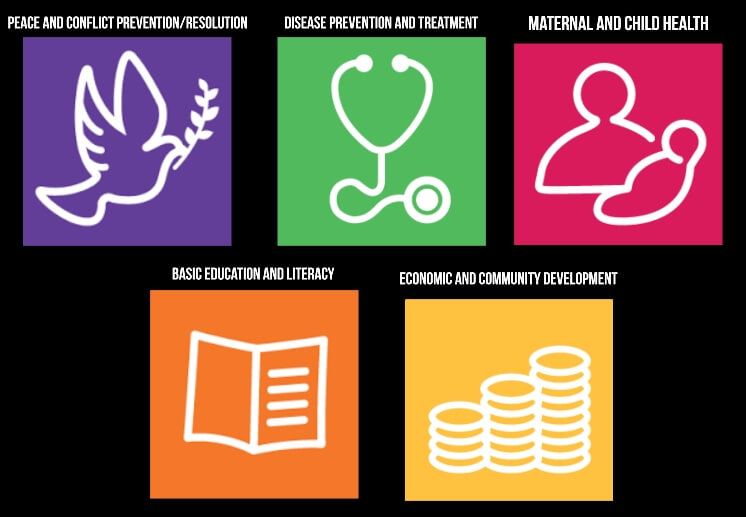 The following is a summary of the milestones we achieved as a Club throughout the Quarter.

The following are the District Events in which RACUOCFMF took part in, during the Quarter.

- Inter-District Youth Exchange Programme : This was a program in which 5 Rotaractors from various clubs in District 3131 in India, came to Sri Lanka to explore the culture and strengthen fellowship. RACUOCFMF took pleasure in joint-hosting our guests on the first day of their visit to Sri Lanka, together with few other clubs. The hosting clubs focused on allowing them to experience authentic Sri Lankan food and culture throughout their visit. During the first day, they were taken to eat “Lumprais”, “Rio Ice-cream” and other local specialties. They were also taken to shop at the Colombo City Center which allowed them to experience a developed Sri Lanka.

The following are the events RACUOCFMF participated in, which were organized by other clubs during the Quarter.

We are looking forward to
another amazing Quarter!