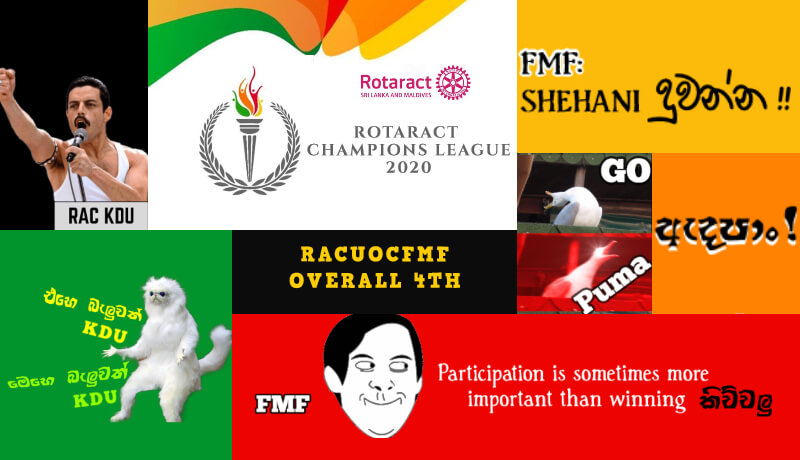 Posted at 15:09h in District Events, Others, Uncategorized by rcuocfmfadmin 0 Comments

Rotaract Champions League 2020 was a beautiful tale of friendly rivalry fueled by unrivaled passion. While talent was discovered a treasure trove of lasting memories was made. With approximately 15 types of sporting events held across 3 days, witnessing the participation of hundreds of Rotaractors coming from all corners of the island, RCL 2020 was a spectacular celebration of peace and reconciliation through the spirit of sportsmanship.

On the 11th of January 2020, after a few hours of running here and there, organizing stuff early in the morning, stopping and catching up with fellow Rotaractors, the command came to stand in lines according to our respective clubs. We were quite excited to see how the event was going to play out. Specifically, our dearest President and Secretary most certainly were overly excited! (Do go through “More Moments from Day 01” to see it for your-self!)

The event began with the usual Rotaract formalities. However we found it interesting that the Flag Salutation was presented in all 3 languages. This was followed by the Rotaract Invocation, 4 Way Test, and the Rotaract Song. 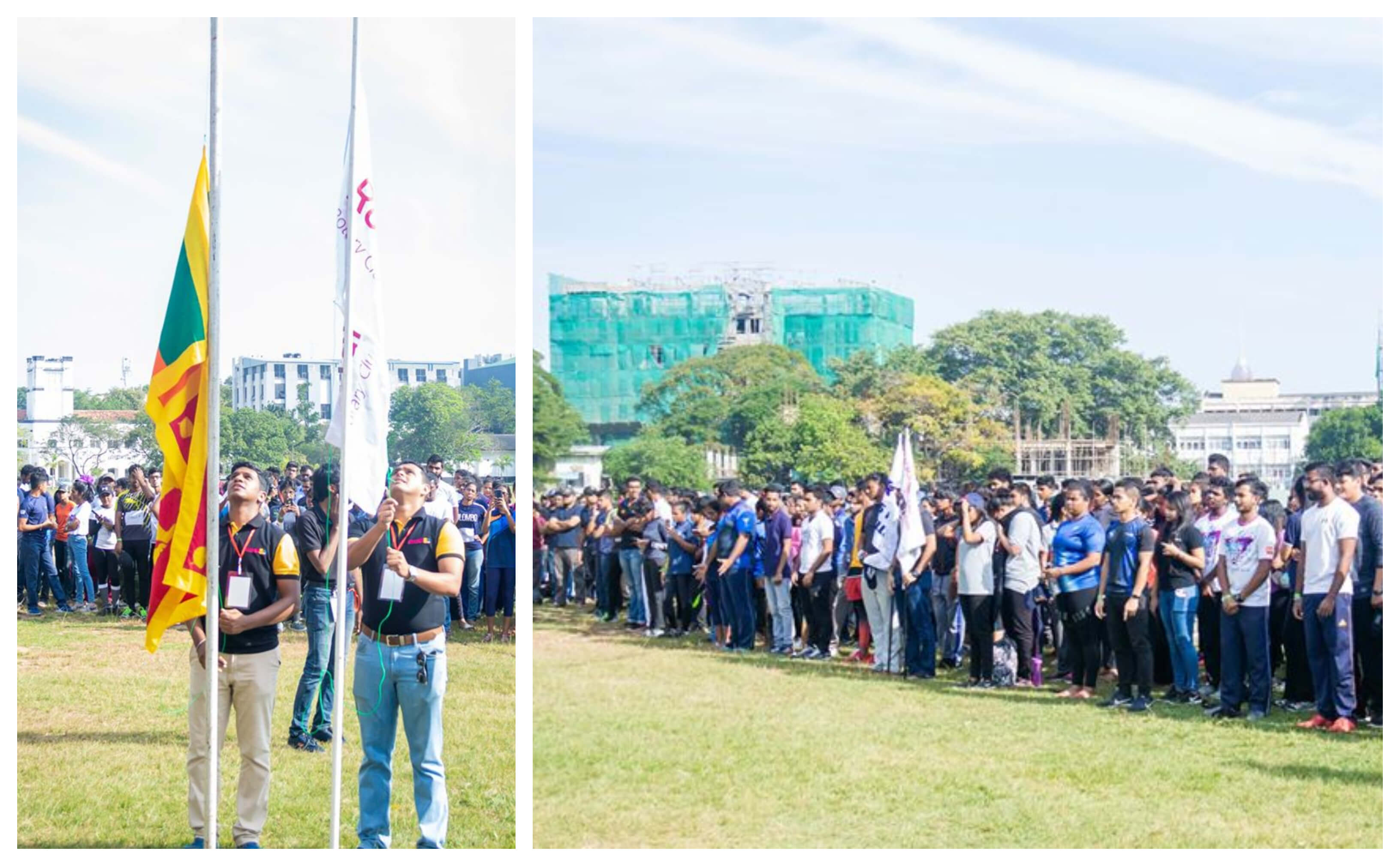 What’s a sports league without lighting the Olympic Torch?

The welcome address was then presented by Rtr. PP. Ravindu Jayakody, who highlighted that RCL is a beautiful opportunity to make new friends. Quoting Jesse Owens who once said, “Awards get corroded, friends gather no dust”, Rtr. Ravindu concluded. 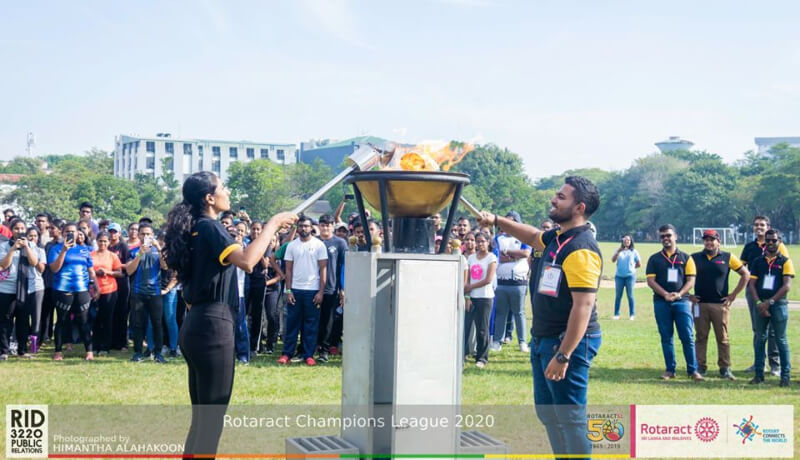 Next in the agenda was the placement of the RCL Shield by Rtr. PP. Nishadi Daluwatte, representing the Rotaract Club of Excellence, the 2019 RCL Champions. Rtr. PP. Oshani Singapuliarachchchi then presented the RCL oath, requesting all participants to say it along with her. The formalities of the Opening Ceremony continued with DRR Rtr. PP. Krishan Balaji addressing the gathering and ended with the organizing committee handing over sporting equipment to the host clubs. 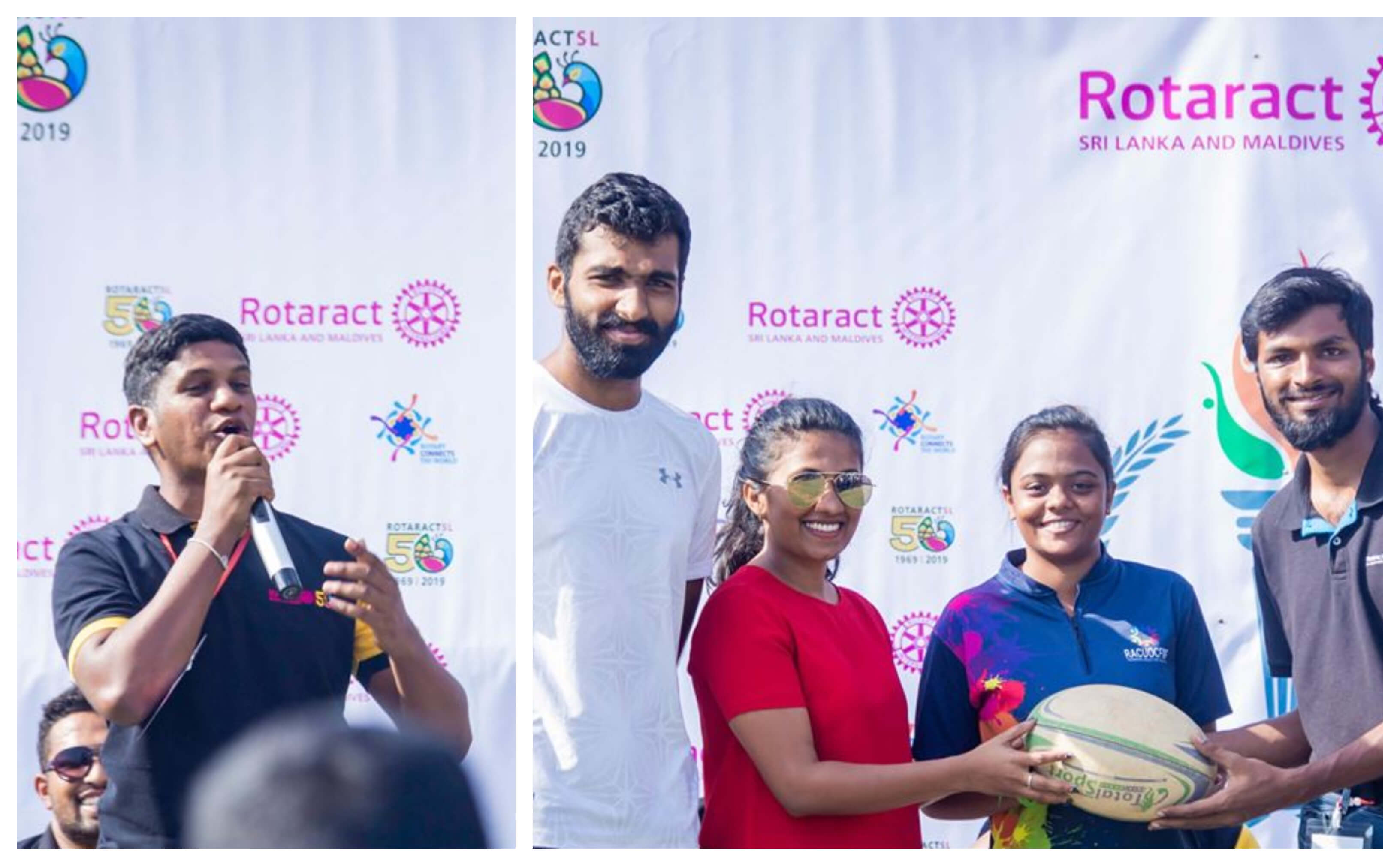 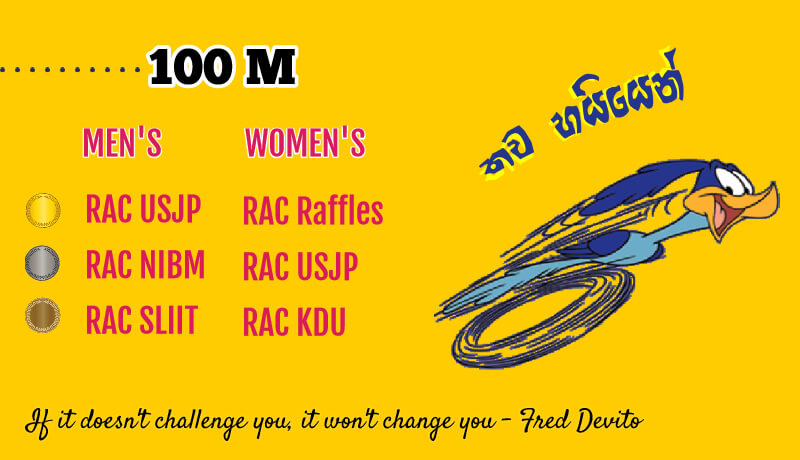 Here’s what Rtr. Aditha Dehigama from our club had to say about the race: Even without practice and techniques it still was an honour and a pleasure to represent my club at RCL 2020. I am not at all disappointed for not being selected to the finals but I’m so glad I could participate on behalf of my club. I am grateful to Rotaract for giving me this opportunity! 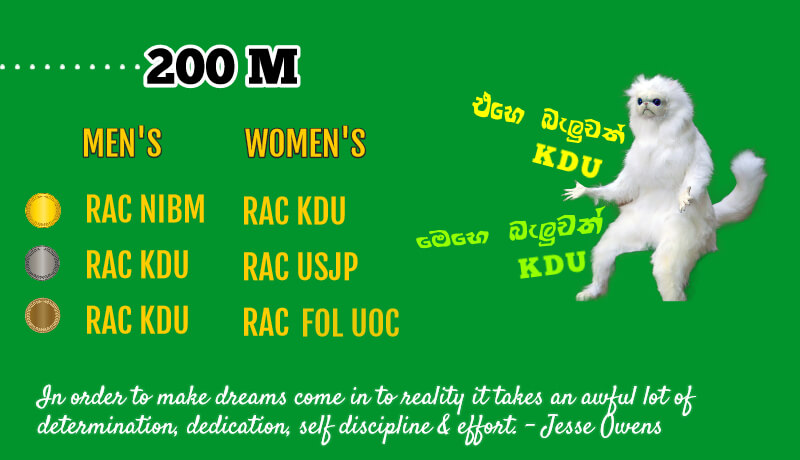 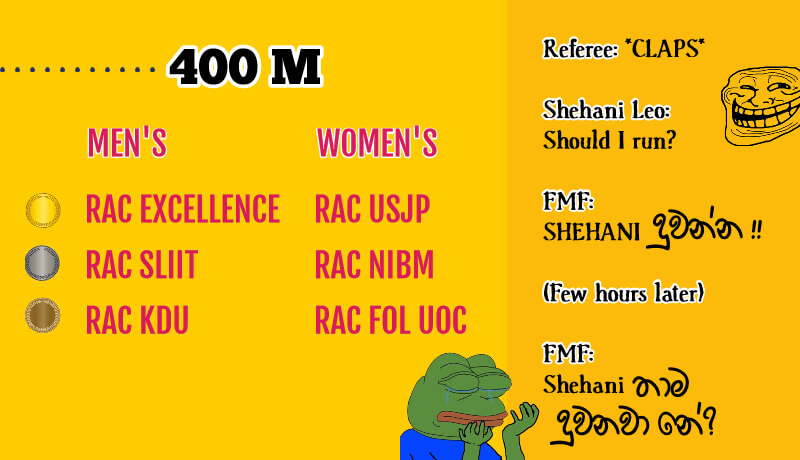 So our extremely passionate, yet not at all athletically talented President, Rtr. Shehani Leo, decided to run the 400m women’s race! (yeah! Those who know her know that this was in one way or the other, going to end up being laughing stock). As she and the other participants were all set and in position to run, the referee clapped and the participants started to run. But then there was Leo, who was still in position, because she FORGOT to run! Yes, she forgot to run in a race meant for running! Alas! Needless to say, that quite became a highlight. 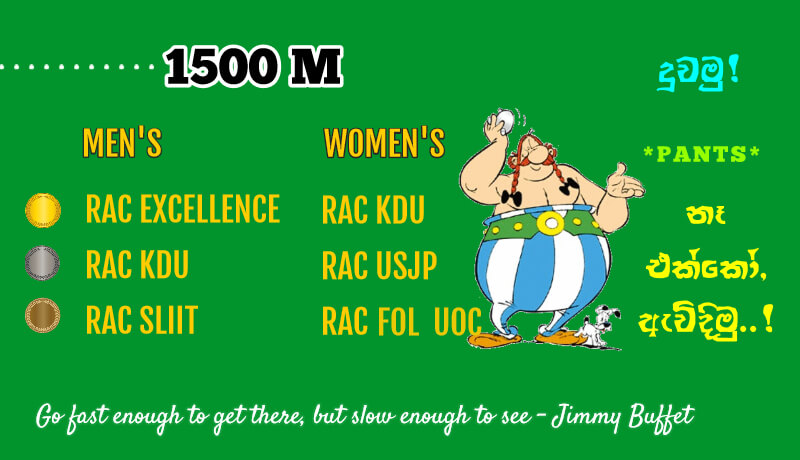 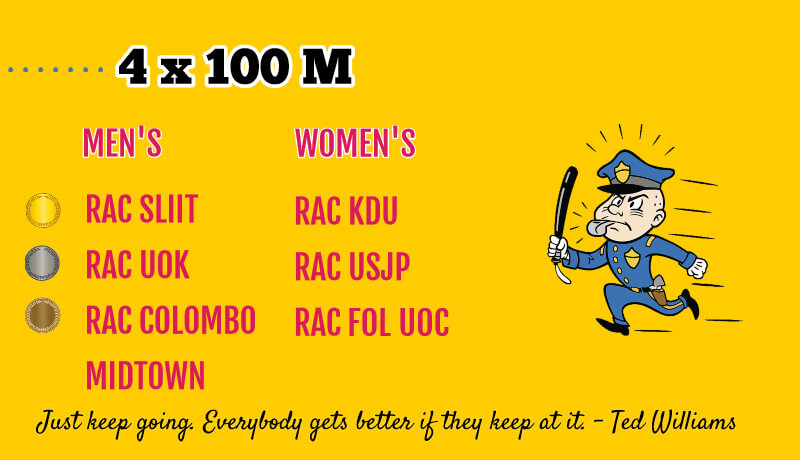 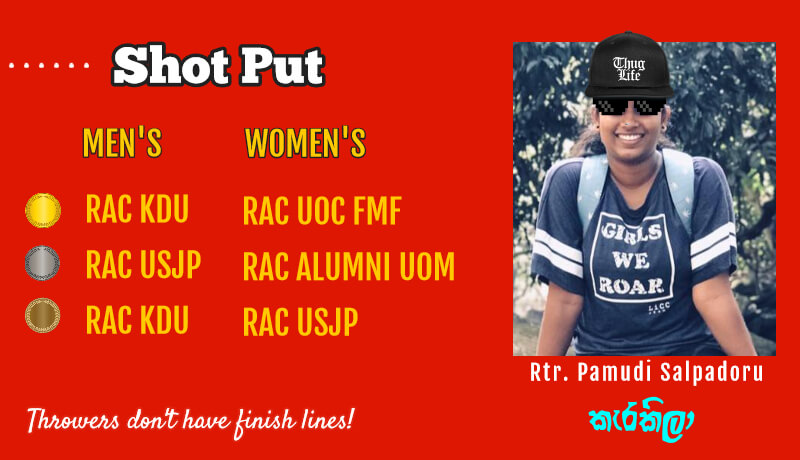 Mitochondria is the powerhouse of the Cell! Pamudee Salpadoru, fondly known as PANU is the Powerhouse of FMF. 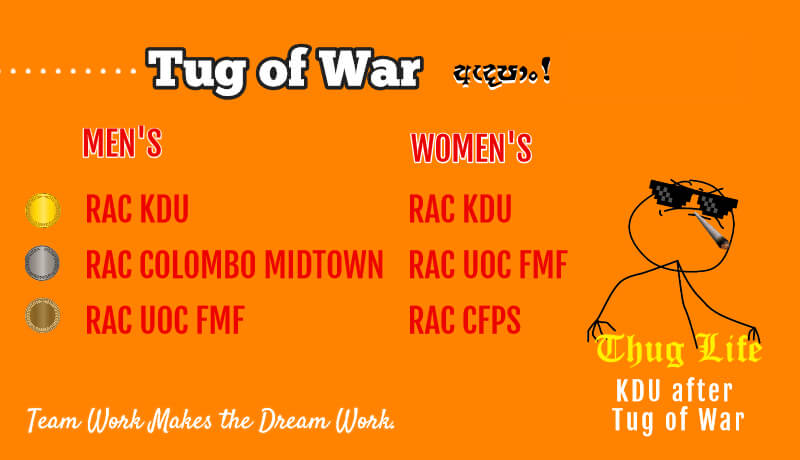 This certainly was the highlight of Day 01, rightfully so, as it was the event that took nearly half of the time allocated for the day, while having the largest crowd fully engaged and excited throughout the tournament. Yes, it did feel like an international Tug of War tournament, for many reasons.

Firstly, almost every participating club took part in this specific event, both under men’s and women’s categories. Secondly, and also the main reason as to why it took long to end, is because all the teams were SO GOOD! They were all tough and competitive, which made it that much more enjoyable for the cheering squads and audience. The screaming supporters (and the non-supporters!), did not stop at all. They only became louder and louder towards the end.

At one point, it also started to look like a marathon between the audiences on either sides as they ran from one side to the other, when the team they were supporting for changed sides. After about 4 intense hours of what looked like an actual war (mainly because there were a lot of falls and bruises involved, I mean, its Tug of War after all!), our FMF fighters won the 2nd place in the women’s category and the 3rd place in the men’s category. 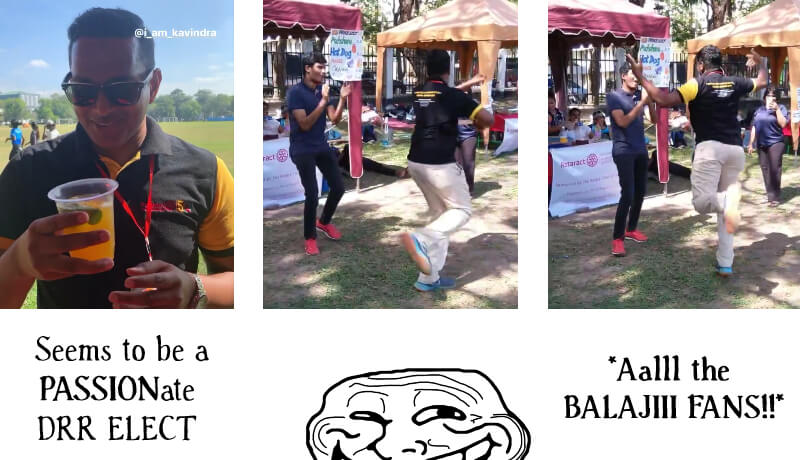 Our overly excited President and Secretary: honestly it was quite hilarious and sweet at the same time, just to see how excited these two were for RCL. Watch the video to see a bit of it.

RACUOCFMF had tough luck on Day 02. However our spirits remained high throughout the day and nor did we forget to enjoy every moment of both victory and defeat! Everyone gave their fullest and “Participation is what matters” was our manthra for the day! 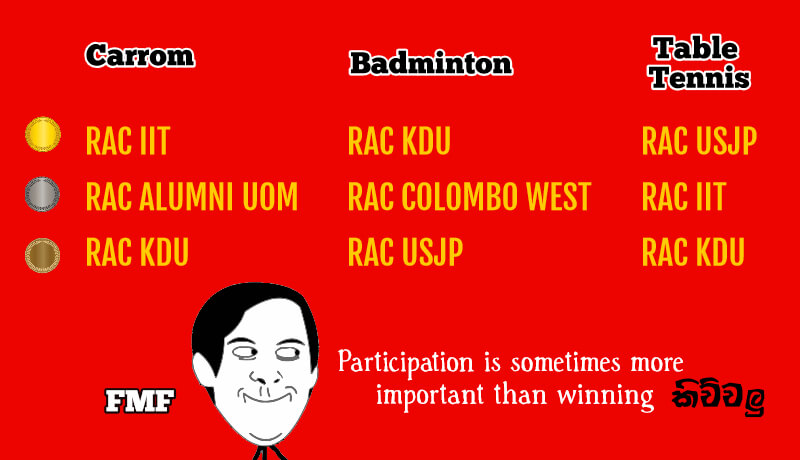 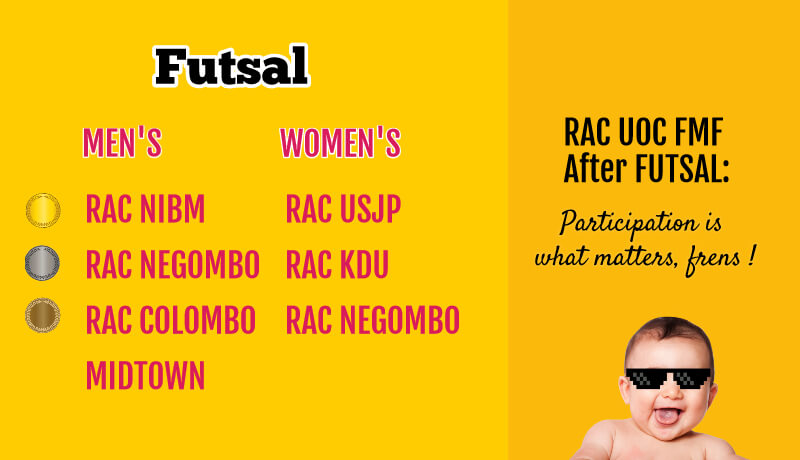 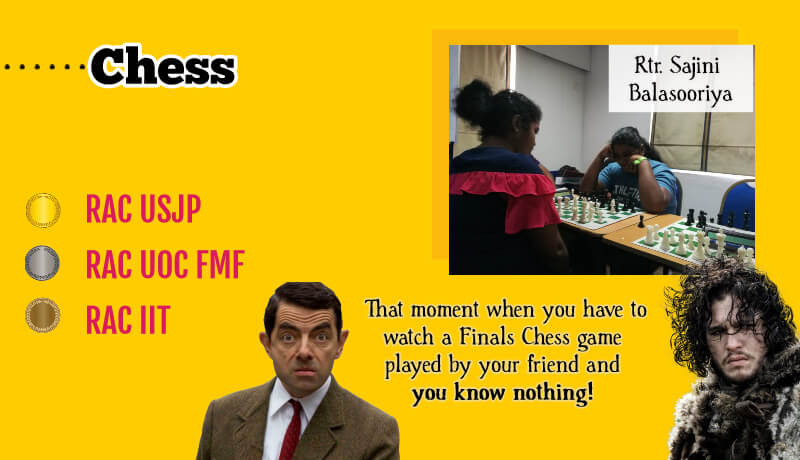 There was pin drop silence in the room during the final and it wouldn’t be an exaggeration, if we say that all air in the room was replaced with pressure. The 2 players were so intensely fixed on the board and so were we when witnessing the game! Knowing nothing about chess we were very clueless yet very hopeful!

RACUOCFMF, along with the Rotaract Club of Faculty of Science, University of Colombo and the Rotaract Club of Colombo North, took the responsibility to host Tag Rugby at RCL 2020. Day 03 for us FMFers began early for this reason (6.30 a.m to be precise), as we had to make sure that everything was well organized. The enthusiasm we witnessed in the participants for Tag Rugby, right from the registration table was quite exciting. Both the men’s and women’s tournaments began early in the agenda, as it was set to continue throughout the day.

On the other side of the ground, it was all about cricket and basketball. 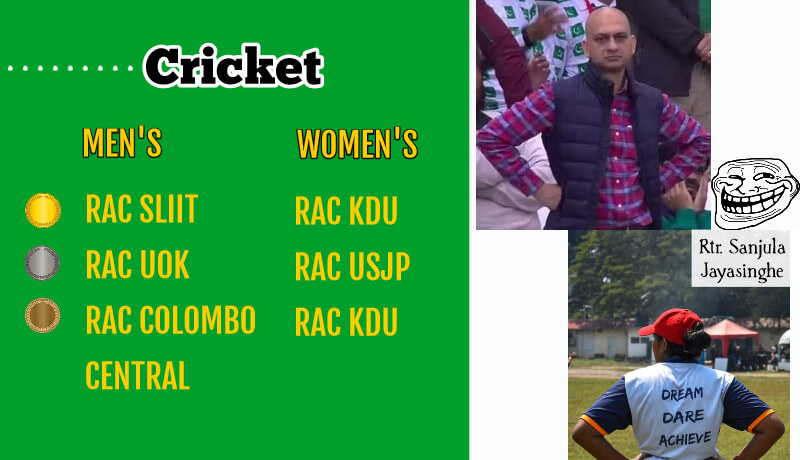 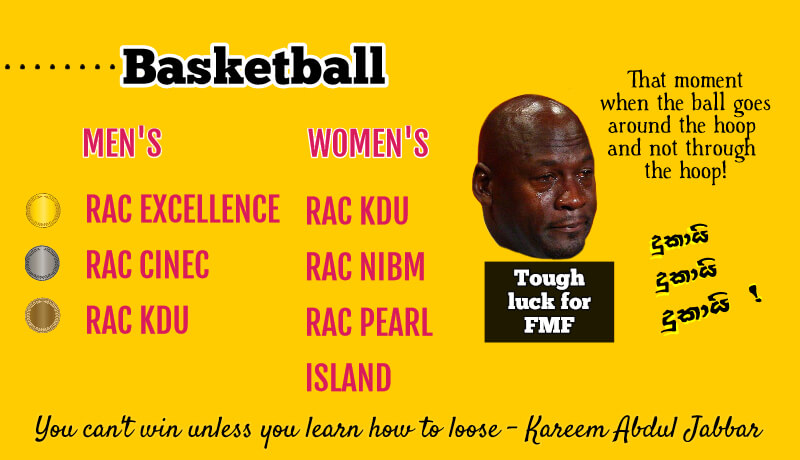 Back to TAG RUGBY! 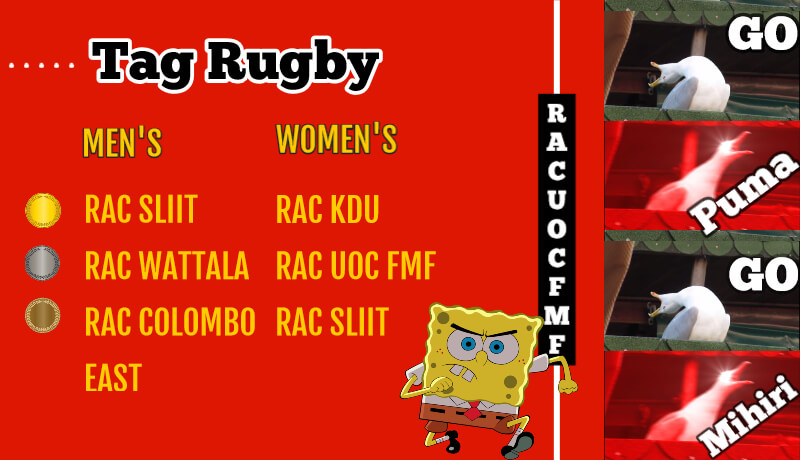 Two separate courts were lined for the men’s and women’s tournaments respectively, which made it even more interesting to the supporters, as they ran back and forth between courts to support their teams, adding to the natural excitement the sport itself brings. Right from the first round, every team had their game face on. Even though there were a few hilarious misses and falls throughout, the rest was tough competition. 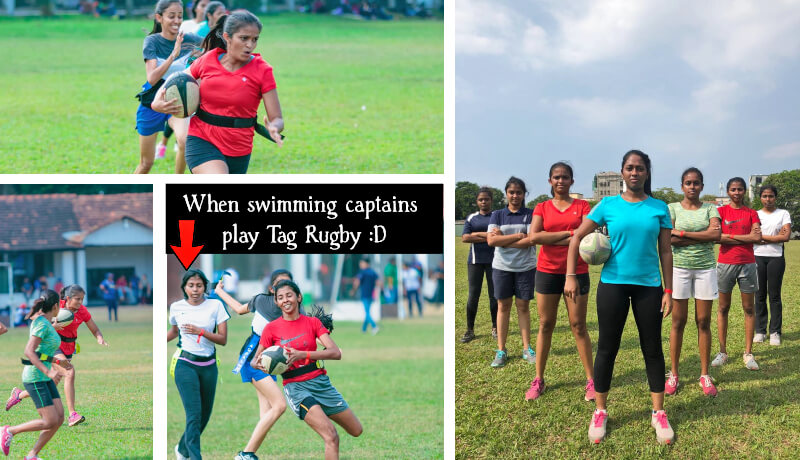 The unfailing spirit of the competitors, especially in the semi-finals and the final matches, made all of us forget the boiling sun and unbearable heat the day brought. After hours and hours of grabbing tags and scoring points, RACUOCFMF secured the 1st runner-up position in the women’s category and the 4th place in the men’s category.

The sports for the day, and for RCL 2020 coming to an end, was a call for some classic lighthearted celebration – Dancing! Everyone present there started grooving, moving and what-not to the beats of the DJ, but more than anything, purely enjoying the music, the company, and just the event itself! And at the end of this, began the closing ceremony of RCL 2020.

As the jubilant Rotaract Club of KDU lifted the Championship Trophy while the ever famous Queen track, “We are the champions” played in the background, RACUOCFMF sang and danced along! 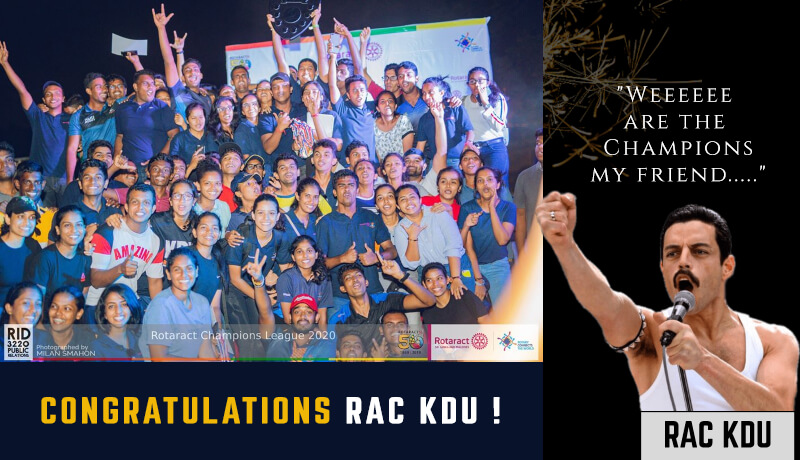 As they started to announce from the 10th position, the cheering only grew louder. When they had come down to about the 6th position, we had lost hope of being included in the top 10 (Specially Leo), which got us even more excited, thrilled, screaming and jumping when we found out that we were placed 4th Overall! 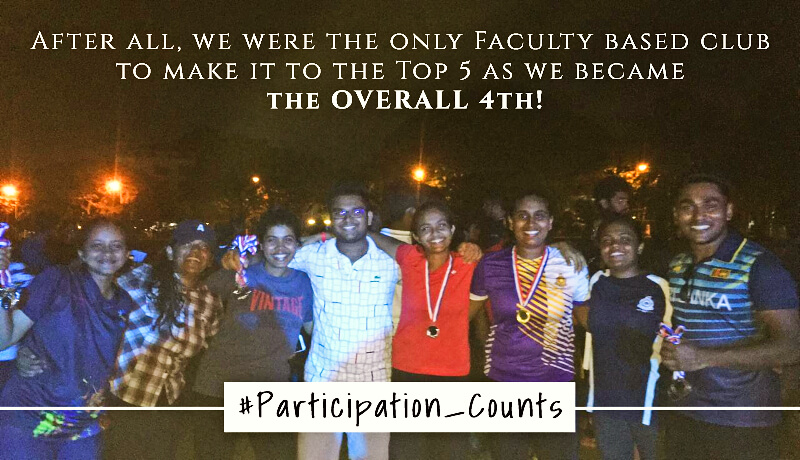 Above all, don’t we all deserve to be called Champs? Why? Coz, the penultimate RCL goals of redefining friendships and learning the best life lessons were achieved with everyone’s sweat, tears and hard core determination!

Friends, we repeat. Participation mattered. Yes, we had chess players play cricket. We had swimmers playing tag rugby. We had cricketers play basketball. We had co-editors play carom. But it all counted at the end. 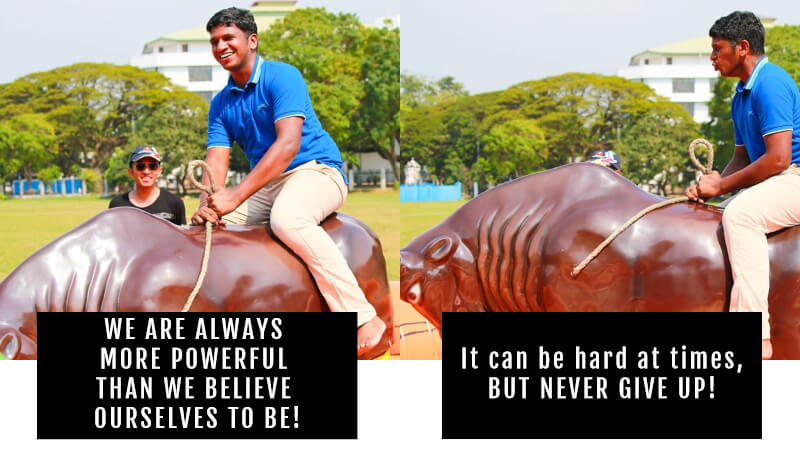 To go though Rtr. Faheema's and Rtr. Jeniff's thoughts about RCL 2020 penned in Sinhalese and Tamil respectively, click on;
රොටරැක්ට් சாம்பியன்ஸ் League 2020