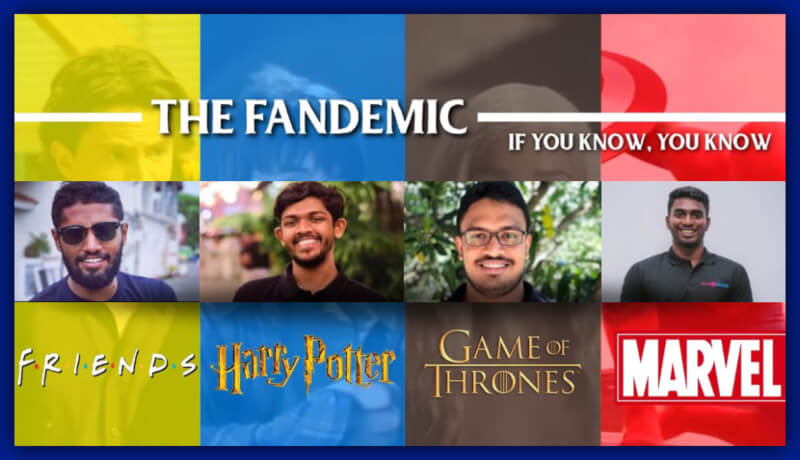 22 May The FANDEMIC – Fandom Quiz

The FANDEMIC was for the ones who doubted if all the gen acquired watching their favourite TV shows or movies would go in vain. The FANDEMIC – An Online Fandom Quiz Series based on 4 Fandoms was seamlessly the best platform for all loyal fans out there to showcase their know-how and make their lives in lockdown quite enjoyable. The excitement was whopping as the 200 slots that were at stake, were almost immediately grabbed within the first 48 hours. We had a message for all the loyal fans out there! – Our tagline!

The best is yet to come and “If You Know You Know.”

Here's our Teaser Video that was published on the 7th of April, a day before registrations.

The 15th of April marked a vital day to all “FRIENATICS” as they prepared to battle it out among themselves to claim the throne. The intensity of STAGE 1 was such that even the greatest of fans of the show were unable to place themselves among the Top 50 and make it to the next stage. With that being said one can only imagine the intensity that followed in the rounds to come. The 10 from the upper crust claimed their spot in the final and were now a jump away from being crowned the Champion.

Rtr.Riz Liyanage from the Rotaract Club of Faculty of Science University of Colombo triumphed with clear dominance over the others. By about 5.30 p.m on the 15th of April, we had one Unrivalled Fanatic with the first Quiz Champ Seat, rightfully claimed!

Next we had the “POTTERHEADS” on the 19th of April casting a few spells to get into the fore. Just as Hagrid exclaimed "I am what I am, an' I'm not ashamed. 'Never be ashamed,” the Potterheads flourished to amuse us with their loyalty. And just as Dumbledore said “Death is but the next great adventure”, RACUOCFMF promised all that, “The FANDEMIC is but the next great adventure! Amongst all the Potterheads out there, a very special one grabbed our attention as he was a top contender to claim the throne. However, our DRR. PP. Rtr. Krishan Balaji who topped the tables on most of the occasions finally had to face defeat in the lights of Sheron Felix, the rightful challenger who certainly made his fandom proud!

As the saying goes “No amount of money ever bought a second of time”, then arrived a “Do or Die moment” for all “MARVELITES” who had got themselves registered. The fight of their lives as they may claim it, took place of the 23rd of April where nearly 200 contenders once again, battled it out to claim their Quiz Champ Seat. The tables turned as Rtr. Adheeban Gowrishankar yet again from the Rotaract Club of Faculty of Science of University of Colombo made a strong comeback from being placed 21st in STAGE 1 to become the Champion in STAGE 3-The FINAL STAGE, outclassing all Marvelites who battled it out on that day. 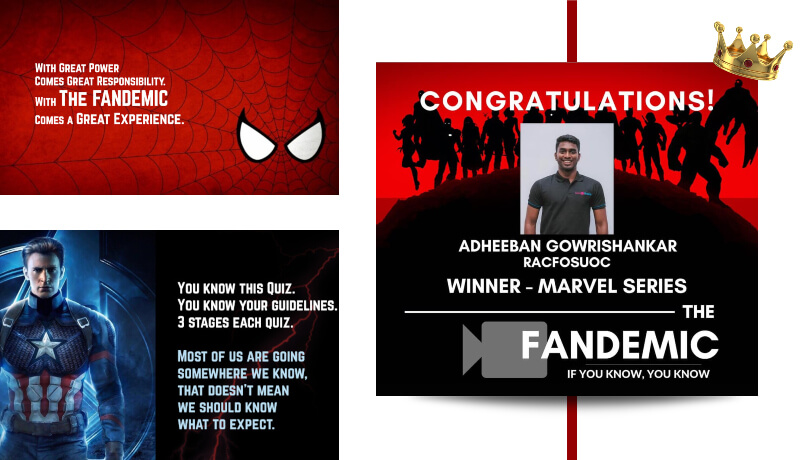 As dusk fell in the Realms of 4 Fandoms on the 23rd of April, 3 out of 4 Quiz Champ Seats were claimed by 3 Unrivalled Fanatics known by the name; FANDEMICS!

"The lone wolf dies but the pack survives." However a pack of fans were yet again split into lone wolves as the final quiz of the series awaited. The end was near but the enthusiasm of all “THRONIES” out there did not blob on any occasion.  The final champ seat was claimed after a hard fought battle by Ravindu Shehan on the 26th April marking an end to the 4 Quizzes that entailed 3 STAGES each and spanned for over 3 hours. 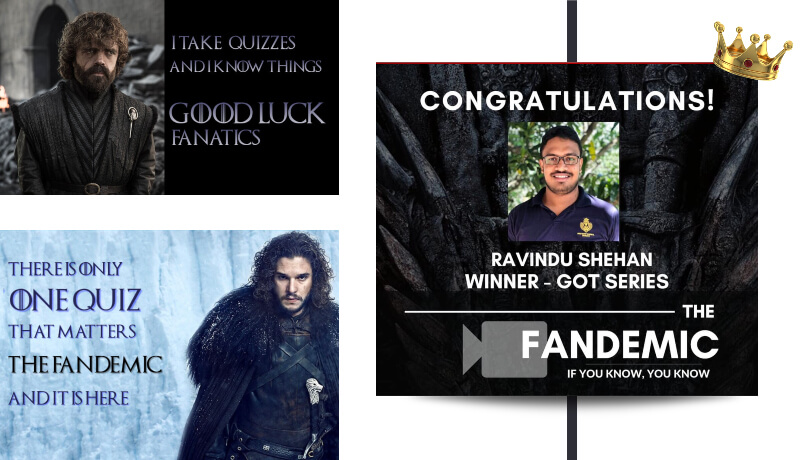 The NEXT STAGE, was a real surprise for all participants with the 4 Quiz Champions in particular!
It was The Grand Finale – The FANDEMIC - ENDGAME!!! 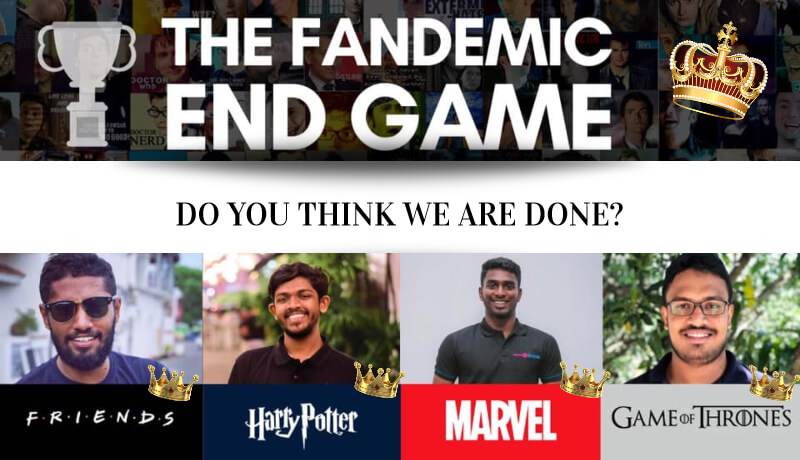 “The FANDEMIC – ENDGAME” was where the 4 Quiz Champions gave their last shot at it and battled it out for one last time to claim the Throne that would rule them all. A hard fought battle was on its way in no time on the 27th  of April with all fans logging in to watch Champions take on other Champions. It was streamed Live on Facebook with the audio track “Portals” by Alan Silvestri from The Avengers: Endgame, playing in the background! Witnessing a changing Quiz Leader-board after every question in the midst of the music, was one TERRIFIC experience that gave us all chills! 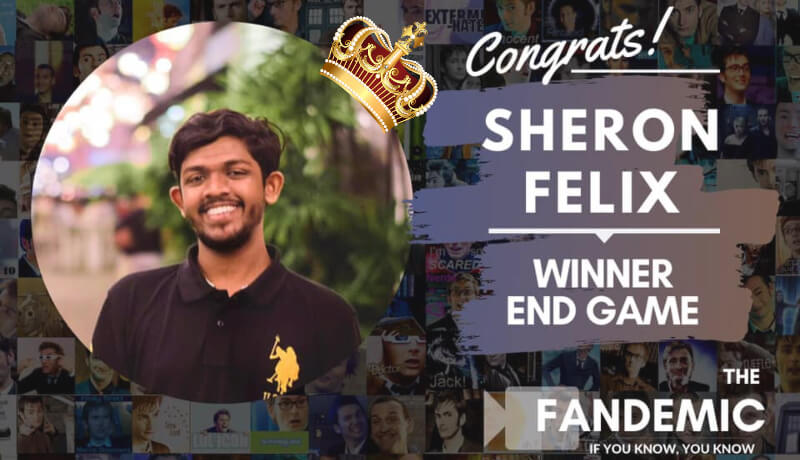 The FANDEMIC 2020 was the 1st of its kind by the Rotaract Club of University of Colombo, Faculty of Management and Finance. As The FANDEMIC 2020 entered the books of Quiz History, as a Tale about One Kingdom of 4 Fandoms, with 4 Quiz Champ Seats and 1 Throne to Rule Them All, it surely is just the beginning of a tale to be continued.

Being a part of this action packed journey while making the period of lockdown truly enjoyable gave us all a boundless experience. Emotional yet lucky to be a part of something that makes it saying goodbye so hard with a promise to be back with something bigger.

To all 500+ loyal fans who battled it out in 29 Quizzes throughout 3 Stages in 4 Fandom Quiz Series, “You’ve Done your Fandom Proud” 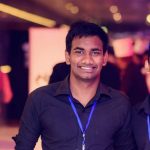