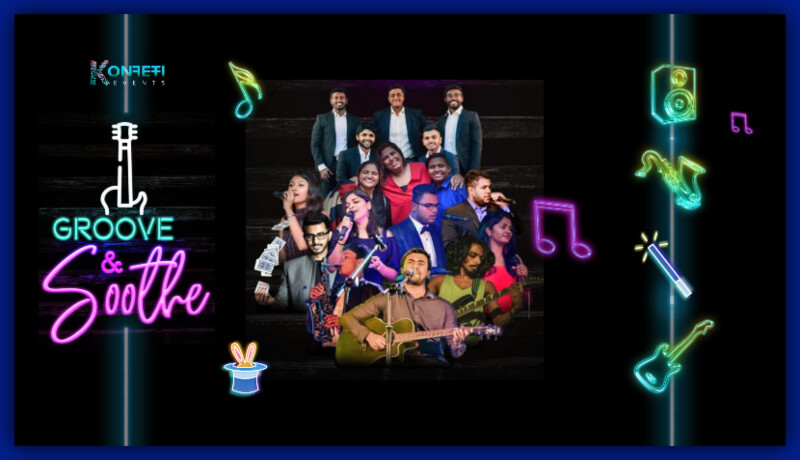 Friday will always remain that favorite day of the week. It’s that day which spontaneously makes us count our fingers till it arrives while running an innumerable number of rat races for five weekdays!  And with COVID 19, all of us started badly missing our Friday night plans! We kept reminiscing the good times and yearned to relive the long nights! “Oh how nice would it be if we could go for a live concert with our college gang?!” we thought to ourselves.

This is exactly when RACUOCFMF read our minds!

‘Groove & Soothe’ was one spectacular musical getaway that featured an irresistible chunk of home-grown talent accompanied with a dash of magic for a twist. It undoubtedly was the best lock down Friday we lived and it surely cured that blistering boredom in all of us.

The night began to shine with Rtr. Aamina Ismail’s cheerful welcome to the event which we were about witness! As promised, the night did turn out to be a wonderful fusion of music and magic! 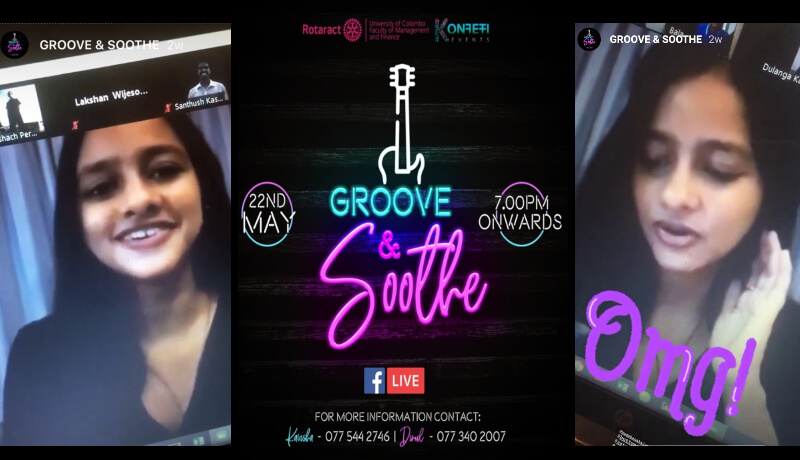 Grenade by Bruno Mars was one of the songs that topped the International charts, technically a decade back! And with this song, the night was given a fiery start by the nightingale of our club, Rtr. Kulani Salgado. Yes, she sang “Grenade!” But her singing was the “Bomb!” Rtr. Kulani didn’t let the good vibes fade away as she continued to keep us grooving at home with her next performance as well.  It was a song about who Bruno Mars said he’d catch a grenade for! (Kidding :D) It was “ළඟින් මගේ ඔබ සතපා” popularly known as “මගේ ආදරේ”, a song sung by Mrs. Chandralekha Perera. Needless to say, she nailed it again.

Who wouldn’t like to look back at the good times they’ve been through while enjoying some drinks with their friends? Rtr. Melan Perera made us walk through our memory lane with the song Memories by Maroon 5. As he played the guitar while singing to the pitch, we experienced yet another proud FMF moment and I’m sure all the Non FMFers must’ve really admired the talent throughout the show. His next performance was the song, සුන්දරීයේ by one of the best Reggae artist duos in Sri Lanka, Jaya Sri! 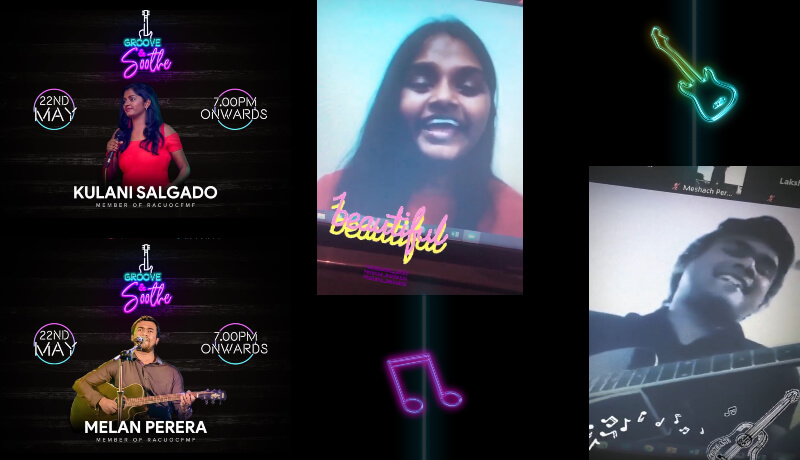 I wouldn’t be doing justice to this article, if I don’t mention about the Facebook comments box during the show! It was one party down there while the show went on. Different gangs of friends both from college and Rotaract who had not been able to catch up for 3 to 4 months entertained the entire audience during the show while cheering for all the youthful and talented performers. Every now and then, we would see comments like “Woah! One more! One more!” after most of the items!

Up next on the agenda was something exciting. Most of us would be lying to ourselves if we deny that we have tried doing this at least once in our life! That’s Beat boxing! Every single time I hear a beat boxer, I seriously wonder as to how they do that without losing their breath. Lakshan Wijesooriya and Rifdan from the well-known “Blaze” joined us with ‘Groove and Soothe’ to definitely make us Groove. Rifdan beatboxed a bit of “Papare” while Lakshan beatboxed parts from "Dance Monkey" and “මට ආලෝකේ ගෙනදේවි සංසාරයේ”. They were the beat. What about the music? Well, they were the music too. Their mesmerizing performance surely proved that they had practised quite a lot! 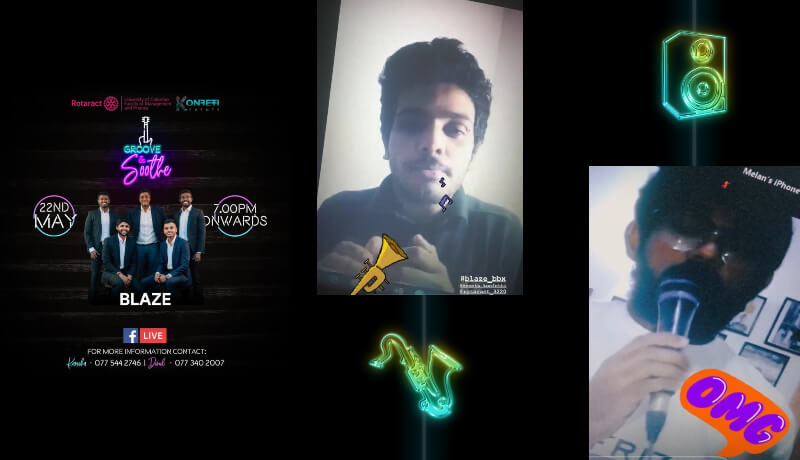 Afterwards, another skilled FMF-er, joined us to keep it going strong and that was Rtr. Yasindu Mendis; a talented keyboard player, a guitarist as well as a wondrous vocalist. No matter how much talent we experience and amazing songs we hear in a local show, it wouldn’t have that nostalgia, emotion and sense of fantasy without a song by the all-time favourite Sri Lankan pop duo, “BNS”! Rtr. Yasindu Mendis gave the audience this feeling by singing “මල් පැන් පොදක්”. No matter how old we become, nothing can beat that feeling of getting to hear a BNS Classic in the middle of a show especially when it’s sung so well! Rtr. Yasindu went on to sing, Michael Bublè’s “Everything”. Talking about these soul stirring lyrics and melodies, although they were initially released almost thirteen years ago, they still do take us to those fairy tale scenes!

Rtr. Malinka Singarachchi with her absolutely charming voice sang yet another loved song, “Photograph” by Ed-Sheeran! By then, the audience must’ve definitely realised why we decided to name the night, not just Groove, but Groove & “SOOTHE”. For obvious reasons, we weren’t able to take “Photographs” of this night. Hopefully, at least these screenshots would serve the purpose. 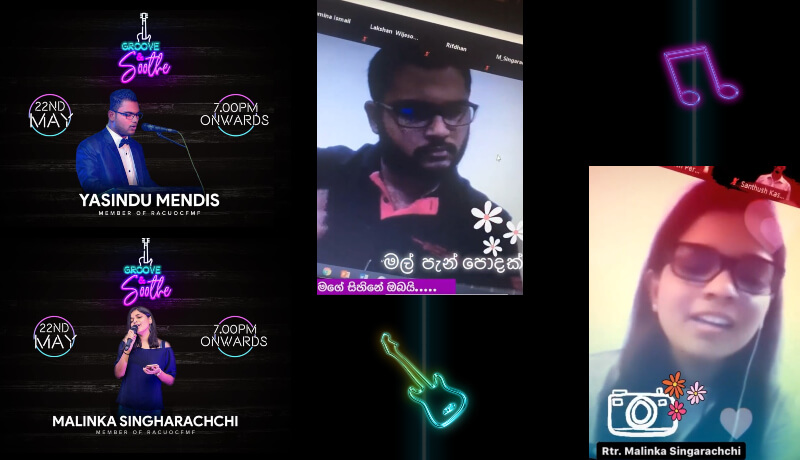 Binu Sahan Narangoda from the band “COCO” who’s a professional saxophonist captivated us even before the event with the trailer of him playing a short Jazz piece! Therefore, we looked forward to his performance and it was fantastic as promised by the trailer! He kept us thinking how merely a single instrument was able make us float in a world of our own. In short, we couldn’t help but fall in love with that soulful performance. 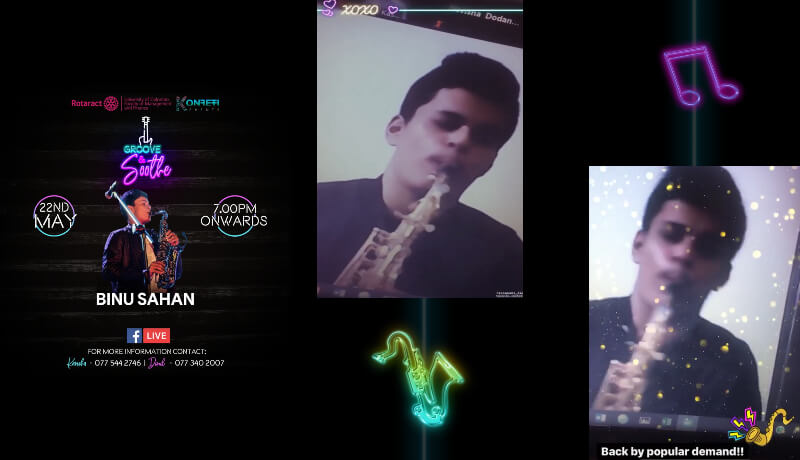 And that’s when Rtr. Dinul Fernando came next and sang what was going on in our heads in terms of Binu’s performance. It was the classic song, “Can’t help falling in love” by Elvis Presley. Once again, we couldn’t help, but fall in love with Rtr. Dinul’s performance as well. Next he sang “අංජලිකා” by Nalin Perera from MARIANS. The Facebook comments box during this performance is worthy of mentioning for some of Dinul’s hyperactive friends kept us entertained. The question remains. Was Dinul talking about “අංජලිකා” when he said, “Can’t help falling in Love, with you”? 😉

Then, Rtr. Kisal Sooriyaarachchi, another multi-talented FMFer, made his entrance with a performance that was completely different to the previous ones. His first song was “ගිමන් හරින” by Pandith W. D. Amaradeva and it was well received by many in the audience. His next song was a song by an experimental band “Gosha” and it was dedicated to someone special in the audience according to Rtr. Kisal. (Wink. Wink;) ) 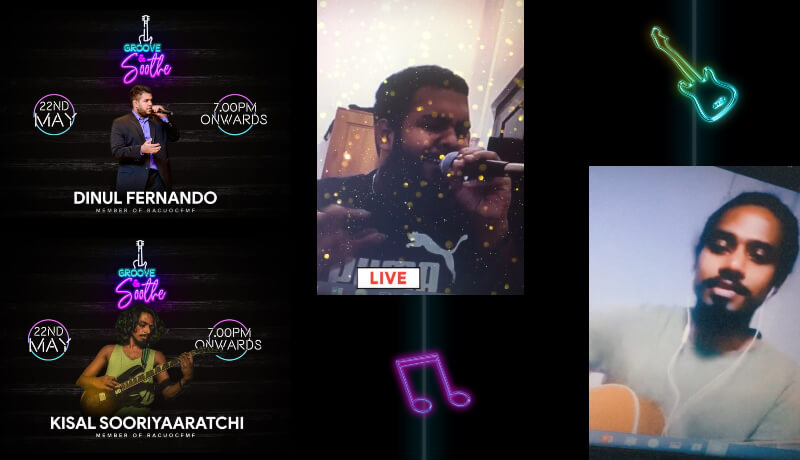 Up next weren’t French Fries but another kind of FAVOURITE POTATO who claim that they “Potate all day, everyday!”

Who do you think it was? It was the, “Singing Potatoes!”

Woah! right? Unfortunately not all 3 Potatoes were able to join us due to social distancing measures and Potato Chinthani Seneviratne fondly known as “Chicky” joined us that night! Before moving on to reading about her performance, do take a look at the interesting virtual background she had while performing! 😀 Chinthani started off by singing “පායා එන සඳවත මනරම්” and I must say her singing was even more “මනරම්!” to be honest! (Beautiful!) The audience was taken to Bollywood with her next item, which was the first Hindi song for the night- Tu Hi Re by A.R. Rahman. I’m sure everyone would’ve just listened to it staying still, all engrossed in the beauty of her melodious voice. 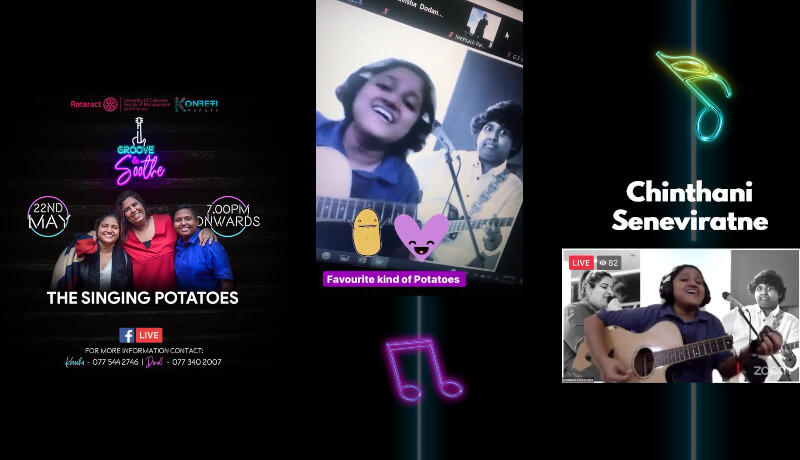 Next in the line-up was Eshani Pathmaperuma from the All-girls Acapella Group – “Voiced Out!” Eshani, with her versatile voice, treated the audience with a performance that gave goose bumps by singing “Flashlight” by Jessie J. Her effortless singing would’ve undoubtedly received a huge round of applause had it not been a virtual concert! 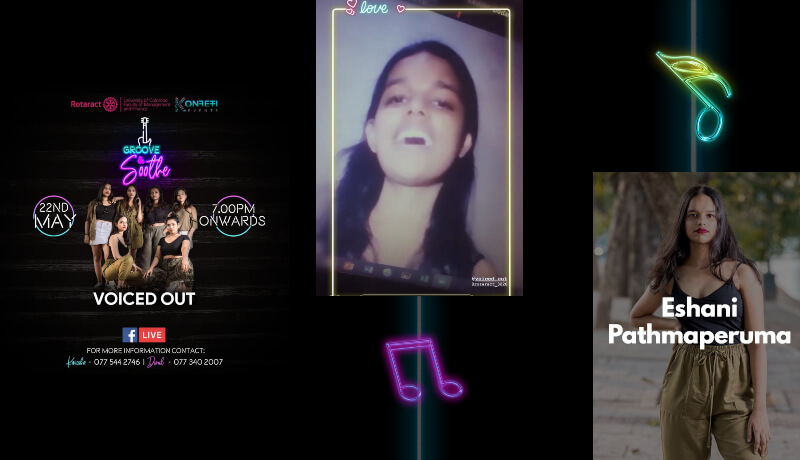 Then came one of the most awaited moments! This was exactly what Rtr. Aamina Ismail meant at the very beginning when she said ‘Dash of magic!’. It was none other than the very first Sri Lankan who performed at Asia’s Got Talent, the Magician, Budshana Kalapuge. This segment was graced by two prominent Rotaract figures, Rtn. G.S Sylvester and DRR. Rtr. PP. Krishan Balaji.

Isn’t it a bit scary when someone reads your brain and starts saying what you are really thinking about? That’s how Budshana started off with a brief mind reading session that left us all spellbound! It was followed by a card trick which used notes and another with a whiteboard! In the course of the tricks, he also involved his social media account where he had apparently previously posted content as same as the answers given to certain questions by Rtr. Krishan Balaji. Now that left us speechless. Finally, upon Rtn. Sylvester’s request, Budshana’s session of enthralling illusions ended with a lesson on a simple trick which Rtr. Krishan Balaji executed successfully in the 2nd attempt. 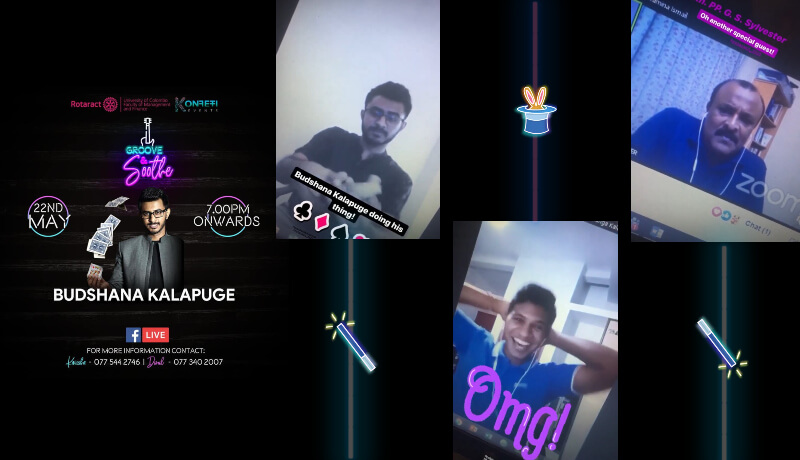 Groove & Soothe ended in style with a sizzling performance by our very own, Rtr. Saseni Wijegunawardene who actually made  us dance at home to “Kaisi Paheli Zindagani”. What a way to end a spectacular night of which we wanted more!

A massive thank-you goes out to everyone who turned a boring Friday in lockdown to a much livelier and memorable one! Kudos to the digital media partner ‘Events Konfetti’ for creating an uninterrupted flow between the segments and the team behind ‘Groove & Soothe’ headed by Rtr. Keshani Jayathilake, Rtr. Kavisha Dodanwala, and Rtr. Dinul Fernando! 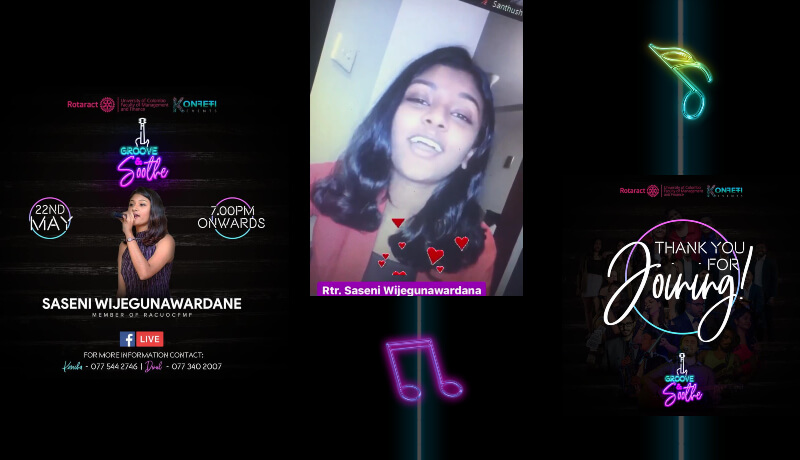 Thanks to their admirable hard work, we finally RELIVED THE FRIDAY NIGHT we had been missing while being socially distant during the Pandemic. 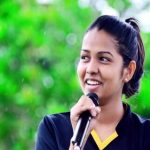